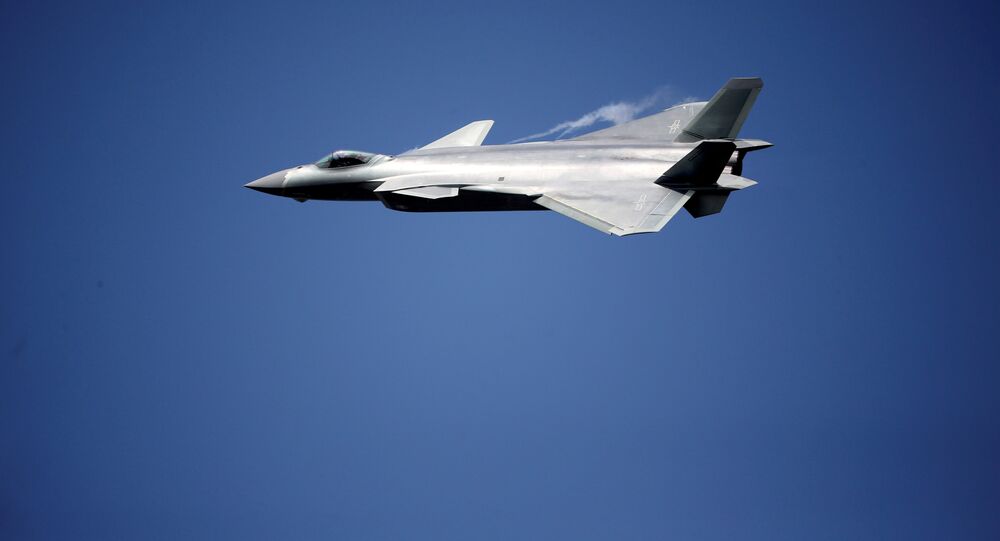 China has unveiled its secretive stealth fighter plane, the Chengdu J-20, in public for the first time. The heavily armed warplanes represent the cutting edge of China's military clout, and are seen as a direct attempt to compete in defense capabilities with the United States.

At China's biggest meeting of aircraft makers and buyers in the southern city of Zhuhai on Tuesday, Chinese showmanship upped the ante. In a previously unannounced debut, the dramatic entrance of two powerful Chengdu J-20 fighter jets zipped across the sky, to the applause of a surprised crowd below, made up of visitors from 42 countries.

The roar of the engines was not enough to drown out the undeniable: that Chinese investment in its expanded military shows no signs of abating.

The full specifications of the Chinese fighter are not yet publicly known, but some observers at the Zhuhai show expect that the Chengdu J-20s will be able to match the stealth, radar-evading properties of the Lockheed Martin F-22 Raptor, developed for the US Air Force. The US F-22 stealth fighter is expected to be deployed in the Pacific by the United States.

As Chengdu J-20 makes its first airshow appearance, it would be interesting to compare last 20-odd years of US, PRC defense industry 1/n

The fighter jets are also being seen as an effort by Beijing to strengthen it's military, to challenge the US military expansion on the continent, in what US policy makers call the US "pivot" to Asia.

It's a development that has not gone unnoticed by the US. In a Rand Corporation report, commissioned by the US Army, published in August this year, US President Barack Obama's former chief intelligence adviser David Gompert, warned US policy makers of increasing Chinese military might.

War with China: Thinking Through the Unthinkable https://t.co/whXlelpxMy via @RANDCorporation

The report highlighted that with the possibility of China's economy overtaking the US's by 2025, and with Chinese technological advances, the military gap between the US and China is set to narrow. It cautioned that a future war between China and the US would be "intense, destructive, and protracted."

"War between the United States and China could be so ruinous for both countries, for East Asia, and for the world that it might seem unthinkable… The United States can no longer be so certain that war would follow its plan and lead to decisive victory," Mr Gompert wrote.

Although the kind of worst-case, all-out conflict scenario that the Rand report refers to is unlikely, relations between the US and China have become strained over the past two years.

A specific flash point between the two, is China's territorial ambitions in the South China Sea.

China disputes sovereignty over parts of the sea, with several of its neighbors, including Japan — a key US ally — the Philippines, Taiwan and Vietnam. The South China Sea is believed to have huge deposits of oil and gas. China has chosen to bolster its claim by constructing man-made islands, and then deploying its military to defend them, a strategy that continues to be condemned by the US and its allies.

The Chengdu J-20 was secretly tested in in 2011, but had not been shown to the public until Tuesday, November 1.

China is projected to become the world's largest aviation market by 2024, according to the International Air Transport Association. The Chengdu J-20 is expected to become operational by 2018.

Airshow China 2016 to Open on November 1 in Zhuhai