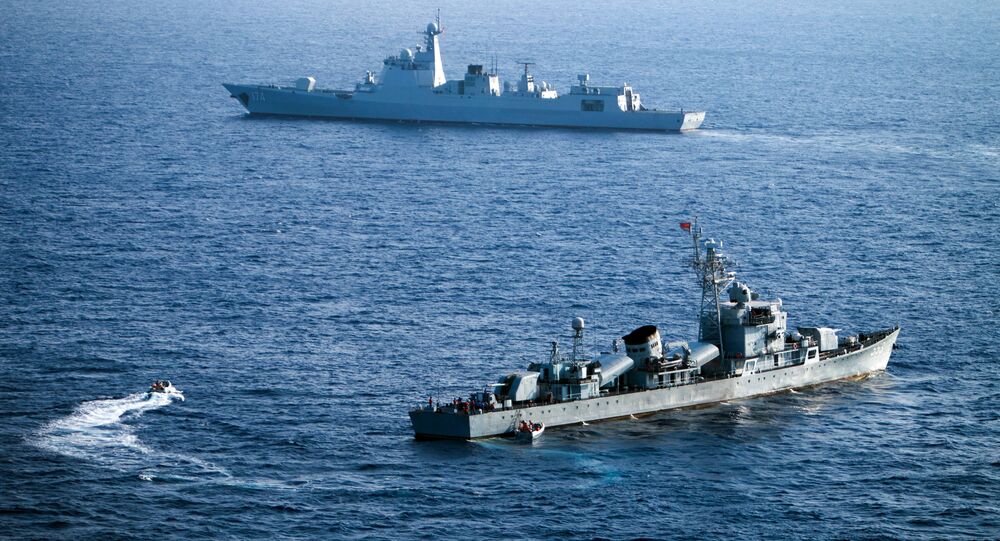 Warnings of 'Destructive' War as China Challenges US Military Might

A future war between China and the US would be "intense, destructive, and protracted", US President Barack Obama's former chief intelligence adviser warned US policy makers on Monday (August 15).

David Gompert sent the warning in a Rand Corporation report commissioned by the US Army.

"War between the United States and China could be so ruinous for both countries, for East Asia, and for the world that it might seem unthinkable…The United States can no longer be so certain that war would follow its plan and lead to decisive victory," Mr Gompert wrote.

​Looking ahead, the report predicts that with the possibility that China's economy may overtake the US' by 2025, and with Chinese technological advances, the military gap between the US and China is set to narrow.

© Flickr / Thomas Depenbusch
‘Huge Slice of the Market’: Why China-Bashing Prevails in US Politics

"Even then, however, China could not be confident of gaining military advantage, which suggests the possibility of a prolonged and destructive, yet inconclusive, war."

It's a prospect that many hope will never be realised.

"Chinese technological progress has been very impressive in the last decade or two. Whether they will reach parity with the US, I hope we never know. There's only one way to find out," Professor Steve Tsang, an expert on Chinese politics and associate fellow at Chatham House, told Sputnik.

Certainly, Monday's report will do little to ease rattled nerves in the Pacific. China has maintained an inflexible commitment to its territorial claims in the South China Sea. It's neighbors see ongoing military expansion, particularly of its navy, now the biggest in the region, and construction activities on the islands as part of a more assertive foreign policy by Beijing.

China earned the Bronze in gymnastics but they pretty much own the entire US economy so those gold medals are practically theirs anyway.

In a speech to business leaders Mr Kishida said: "Candidly speaking, a rapid and opaque increase in (China's) military spending and unilateral attempts to change the status quo in the East and South China Seas, under the aim of building a strong maritime state, are having not only people in Japan, but countries in the Asia-Pacific region and the international community worried greatly."

Also disputing parts of the waters, believed to have huge deposits of oil and gas, are Brunei, Malaysia, the Philippines, Taiwan and Vietnam.

Indeed, Professor Tsang notes that the Chinese have a right to flex their own military muscle.

"I do not think it is right to say the military reforms are just for the purpose of defending their territorial claims in the South China Sea. From the Chinese government's perspective, why should they accept that the US has a predominance in the world?" Professor Tsang told Sputnik.

Since Obama's so-called pivot to Asia, a major policy shift outlined in 2011, Beijing has been suspicious of US activities in the Asia-Pacific region, as an attempt to counter its rise.

However, such fears may be exaggerated, suggests Professor Tsang.

"Beijing does have a perspective that the US is encroaching on the region. The Chinese see the Americans as being aggressive in Asia but there is little to support that. The Americans could not have imposed themselves on the Philippines or Vietnam because they both have a record of kicking the US out."

​"Obama's America prefers not to drive in the front seat, like in the George Bush administration, but it is being accused of doing just that."

The difference between reality and perception, and the resulting suspicions that arise as a result, is also highlighted in the Rand report:

"Premeditated war between the United States and China is very unlikely, but the danger that a mishandled crisis could trigger hostilities cannot be ignored. Thus, while neither state wants war, both states' militaries have plans to fight one."

Gompert's dire warnings come ahead of the November's US presidential election, in which the Republican nominee, Donald Trump, has refused to rule out the possibility of declaring war.

"I would use trade to negotiate. Would I go to war? Look, let me just tell you. There's a question I wouldn't want to answer," Mr Trump told the New York Times in March.