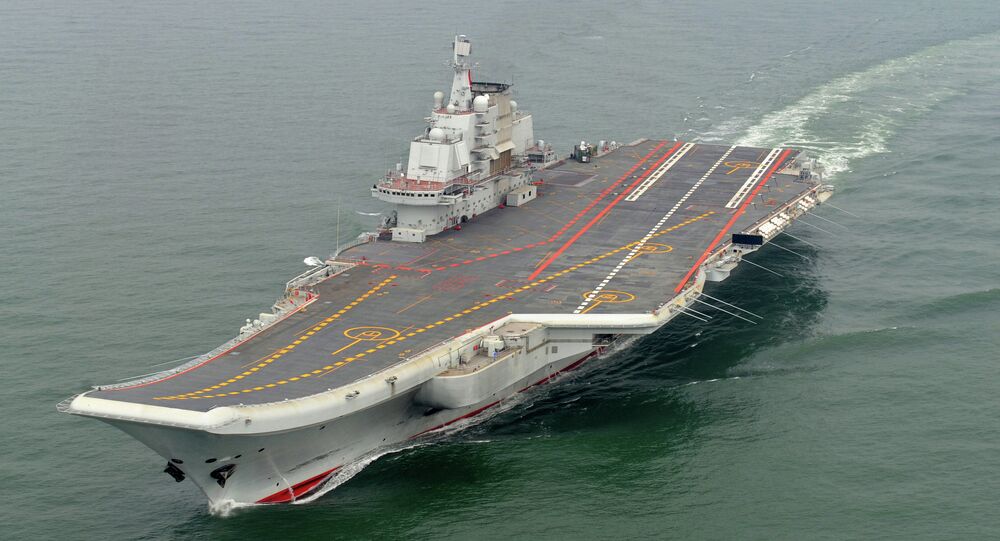 Growing tensions in the Asia Pacific region, amid which the US is playing the role of a self-appointed "indispensible mediator," are the result of Washington's long-standing and well-documented foreign policy, Tony Cartalucci stresses.

Although the increasing tension between Beijing and its neighbors in the Asia Pacific appears to be spontaneous and unstoppable, threatening to drag the region into a conflict or even to enflame a global standoff, it is not what it seems, Bangkok-based geopolitical researcher Tony Cartalucci emphasizes.

"The stated goal of US foreign policy, particularly the "Pivot to Asia" is to reestablish American preeminence in the Pacific region, thousands of miles from American shores. There are policy papers drafted from corporate-financier funded think tanks that openly call for the encirclement and isolation of China to thwart its rise as a regional economic and military power," the researcher underscored.

© AP Photo / Lefteris Pitarakis
China Paves Way to Global Dominance Resting on US Marshall Plan
"This is not because the United States fears Chinese troops storming the beaches of California, but because they fear China challenging and displacing American influence where it shouldn't be in the first place," he elaborated.

Citing the 2006 Strategic Studies Institute's (SSI) report "String of Pearls: Meeting the Challenge of China's Rising Power across the Asian Littoral," the researcher highlighted that it openly propagated plans to undermine Beijing's interests along a "string" of ports, pipelines, and other Chinese installations stretching from the Middle East and North Africa (MENA), past Pakistan, India, and Myanmar, "and all the way back to the country's shores in the South China Sea."

© AFP 2021 / Greg BAKER
Clumsy US Policy in Asia Pacific to Aggravate Sino-American Relations
In light of this strategy, the US-engineered "Arab Spring" of 2011 acquired a new meaning. Mr. Cartalucci stressed that the Islamist movement eventually disrupted Chinese interests in the MENA region. Furthermore, the recent upsurge of conflicts in Myanmar and Pakistan as well as aggravated "island disputes" in the South China Sea can be also regarded as a part of the US' strategy.

"In virtually every point along the "string" the SSI report covered, we now see concerted violence and political chaos whose source stems from US State Department-funded nongovernmental organizations and movements everywhere from the Middle East, to Baluchistan, Pakistan, to Myanmar, and of course to the governments of Japan and the Philippines, subservient to US interests since the end of the Second World War," the researcher pointed out.

The 2006 report stated that Washington, through its military strategy, diplomacy and economic policies "has an unprecedented opportunity to shape and influence China's future direction." According to the SSI report China should be integrated into the present world order as a "responsible stakeholder."

© Flickr / Marines
Tensions Easing? US Invites China to Joint War Games After Military Agreement
What world order did the SSI mean? Of course, that "which Wall Street, Washington, London, and Brussels created, controls, and are the sole benefactors of," Mr. Cartalucci emphasized.

He quoted another document, written in 1997 by US policymaker Robert Kagan and entitled "What China Knows That We Don't: The Case for a New Strategy of Containment." Robert Kagan had put it clearly: "The present world order serves the needs of the United States and its allies, which constructed it."

The real cause of the ongoing tensions in the Asia-Pacific region is the same "special interests" which have sparked all of the world wars. These are the interests of those who seek global hegemony and are unwilling to accept the multi-polar world order.

"It's very clear then that tensions in the Asia-Pacific, amid which the US attempts to pose as an indispensable mediator, are in fact the intentional, premeditated consequences of long-standing, well-documented US foreign policy. It is clear that a rising China was not the cause of the last World War, nor will it be the cause of the next," the researcher underscored.

Soros Warns Russia-China Military Alliance Will Take on US