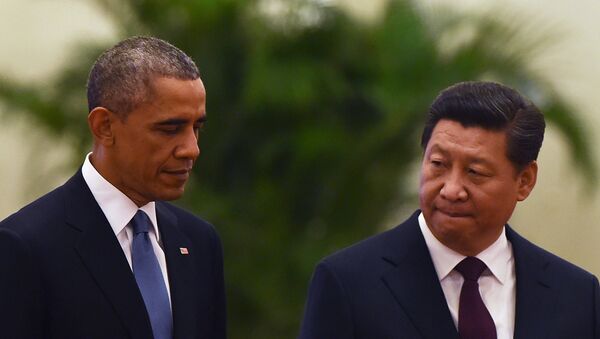 America's instinct to contain any fast-growing rival for global influence may do a disservice to Washington, especially in the context of growing tensions between China and the United States, writer and China analyst Rebecca Liao warned.

"Alas, our clumsy statecraft these last few months in the Asia-Pacific betrays a deeply antiquated and dangerous misunderstanding of the Middle Kingdom and how to deal with its growing influence. Despite its protestations otherwise, the United States has been clearly trying to establish boundaries on China's power in the Asia-Pacific [region]. For 'the world today,' that approach encourages aggression with few benefits," the analyst underscores.

Eurasian Heartland: Silk Road and EEU to Solidify Sino-Russian Relations
According to Liao, Obama's "Asia Pivot" strategy is aimed first and foremost at containing Beijing's economic, military and political development in the region.

So far, Washington has boosted its relationship with Tokyo, China's longstanding political rival, as well as with India and a number of Southeast Asian countries.

Furthermore, the United States has escalated its surveillance of the disputed waters of the South China Sea, prompting China to accuse Washington of territorial incursion.

Pentagon Presses China to Halt S. China Sea Projects, Beijing Stands Firm
On the other hand, the Obama administration has pushed ahead its Trans-Pacific Partnership (TPP) project, aimed at facilitating trade between the United States and Asia-Pacific nations at the same time leaving China behind.

In addition, the United States found itself in an awkward position when most of its allies joined the China-led AIIB, regardless of Washington's vocal displeasure. While the US-influenced International Monetary Fund (IMF) and World Bank were making petty efforts to save face, prominent American-Chinese experts stated that Washington would have been better off welcoming and joining the AIIB instead of opposing it and thus far cutting its own throat.

"The instinct to contain a fast-growing rival for global influence drove US action in each of these cases. This strategy is a remnant of Cold-War thinking, in which relations between major world powers were neatly reduced to a zero-sum game between good and evil," the analyst emphasized.

China Warns US: End Finger Pointing & Microphone Diplomacy to Fix Relations
Liao pointed out that the other side of the coin is that China and the United States are too dependent on each other and interconnected economically. They also have shared interests in terms of national security. In this light the countries can hardly resort to "pure competition," the analyst stressed.

"Given China's rise and our relationship with them, the United States cannot be effective in the Asia-Pacific [region] by leading from the front. We cannot approach the region as the indispensable nation. China is extremely sensitive to any indications that America is gathering a team of allies in Asia, believing that we are doing so at their expense," Liao remarked.

Washington should accept the idea that it cannot just contain China. Instead the US leadership must change their approach and seek compromise with the Asian Dragon, the analyst deems.

However, according to Liao the United States should not give up its attempts to remain "first among equals" in the Asia-Pacific region, strengthening ties with Southeast Asian nations.

Cooperation with China, on the other hand, is half the battle for a successful "Pivot to Asia," she highlighted.

"If we continue to rely on old habits, recent headlines of a looming military conflict will persist," Liao warned.