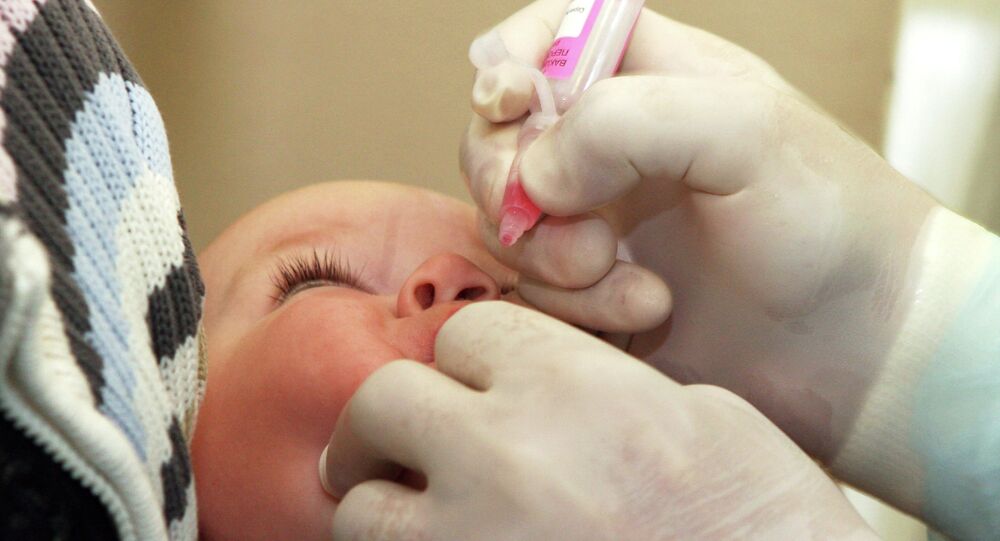 One of the scientists behind the research that might help to defeat Zika, Ebola and polio revealed to Sputnik details about a new breakthrough vaccine.

© Sputnik / Igor Zarembo
Hundreds of Parents Denying Polio Vaccine to Children Detained in Pakistan
Scientists have started using plants to make a polio vaccine. The team of researchers at the John Innes Centre developed a process that is cheap, easy and quick.

Radio Sputnik discusses the issue with Dr. Johanna Marsian, a project manager for human and viral vaccines at German biopharmaceutical company IDT Biologika, who was one of the scientists behind the research.

"It is a very significant result, especially for plant-based research. It is a huge discovery, because it has a huge impact. Polio is known worldwide as a horrific disease," Marsian told Radio Sputnik.

According to the expert, the work on the project started accidently.

"It was actually a coincidence. My supervisor at that time, he was friends with someone who was involved in this project, which is funded by the WHO. And he asked my supervisor if he would be interested in trying plants… in order to produce this vaccine. And this is how we came across it, how we started," Marsian stated.

The scientists also explained what the process of the vaccine production looks like.

"Basically, we hijack or we use bacteria that can infect plants. And instead of letting the bacteria infect plants, we use it and make it transfer the DNA that we injected into this bacteria into the plant. And then the plant actually produces what we wanted to produce: in this case it was proteins, polio proteins which then form the virus capsid…. It looks like the real virus, but actually it's a plant-made protein capsid without the genetic material inside, and therefore, it is absolutely harmless," Marsian said.

© AP Photo / Abbas Dulleh
Salvation? Congo Approves Use of Experimental Ebola Vaccine
The scientists believe that their discovery will help the world react to unexpected threats such as Zika or Ebola. According to them, plants have a great advantage over other biological systems, as they are easy to grow and are harmless. In this case a close relative of tobacco has been chosen as a material and turned into a polio vaccine "factory."

Poliomyelitis is a tough disease which often leads to disability or even death. Mainly children less than five years old are under threat of this disease, which destroys motor neurons in the central nervous system causing paralysis.