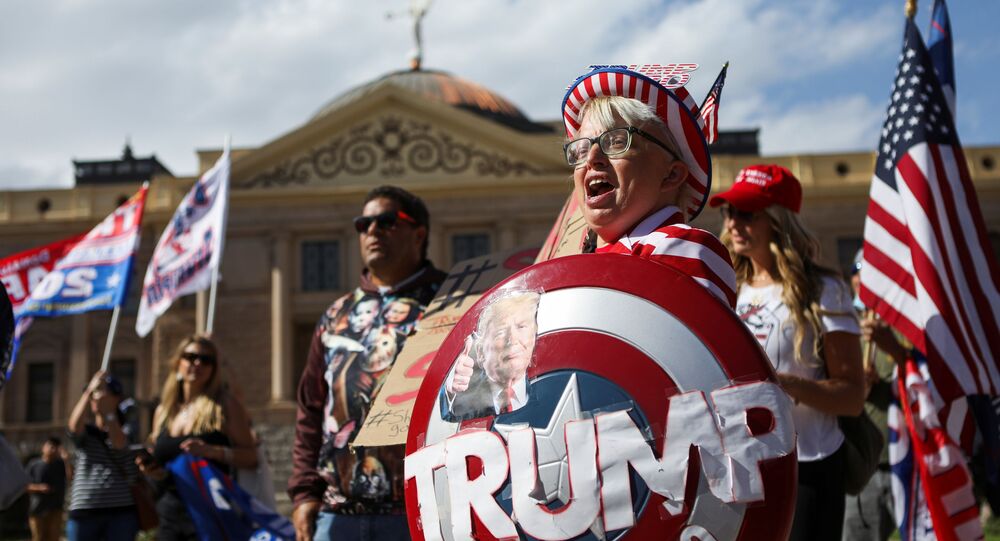 The Trump administration is calling for an investigation into alleged voter fraud, including dead people voting, barred poll watchers, and the mail-in ballots controversy. US political observers have discussed the instances of supposed election irregularities and the ways to sort the problem out once and for all.

Although the Associated Press asserts that the 3 November election was the "most secure in US history", Fox News' Tucker Carlson has revealed the list of 25 dead people who, as he said, had voted in the 2020 presidential election. "In some ways, it's an inspiring story, the triumph of voting over death," the Fox News host noted, adding that this year's mail-in ballots sent en masse over the pandemic emergency had obviously enabled those deceased "to vote" and opened the door to potential fraud.

'US Voter Rolls are a Mess'

For instance, in October 2013, Newsday reported that out of 6,100 "dead registered voters" in Nassau County, New York, about 270 "actually voted" with one man casting ballots 14 times since his death.

"The voter rolls are a mess", Luongo says. "Some of that is typical state incompetence through poor record keeping and inter-department bureaucracy and some of it is intentional, if not sinister. For this election, from what I've seen so far, it is far more widespread than in the past. Any operation with this many humans involved in the logistics of it is bound to have some amount of corruption".

Roughly two months before the election, the Public Interest Legal Foundation, an American legal group, published a study revealing that nearly 349,773 dead voters were still eligible to cast a ballot being found on rolls in 41 states. As Carlson noted in his Thursday show, these numbers do matter when the race is razor-thin.

Personally I think that after 20 years of being dead you should no longer have the right to vote https://t.co/COVr8M5kHb

​​"It is clear that we have purposefully disorganised election systems in places where the Democrats have been trying to flip states for years," the publisher suggests.

The potential for massive fraud was "obvious", according to US investigative journalist Mark Dankof.

"In Texas, I received duplicate mail-in ballots although I had never requested one," he recalls. "It has also been amply demonstrated that in all the states with hastily concocted mail-in ballot schemes, the logistical manpower and verifiable procedures to insure legitimacy were absolutely - perhaps deliberately - lacking. Ballot Harvesting is part of this illegitimate process."

Still, the voting dead is not the only cause of concern for those who have thrown the fairness of the 2020 election into question, according to Luongo, who refers to "glitches" inn voting machine software and instances of poll watchers being ousted.

"Voting machines based on proprietary software are anathema to even the illusion of democracy," the analyst insists in an apparent reference to Dominion voting machines software which was reportedly behind an alleged "glitch" that switched 6,000 votes from Trump to Biden in Michigan's Antrim county.

Addressing the assumptions of supposed software "glitches", Dominion Voting Systems argues that "no credible reports or evidence of any software issues exist".

"The Michigan Secretary of State's office offers a Fact Check Page which debunks false or erroneous claims about voting in Detroit, as well as a user-error incident in Antrim County," the company said in an official statement. "Dominion equipment is used by county and state officials to tabulate ballots. Human errors related to reporting tabulated results have arisen in a few counties, including some using Dominion equipment, but appropriate procedural actions were taken by the county to address these errors were made prior to the canvass process."

No less worrisome is the behaviour of election employees in Pennsylvania who either kicked Republican observers out or did not allow them to watch the ballots being counted appropriately, the analyst says.

"[It's] because they were cheating outrageously," Luongo suggests. "There is no other reason for this. Everyone has a cellphone. The excuse of 'social distancing' over COVID-19 is being used to bar people from observing the process."

In addition to this, Pennsylvania election employees ignored the decisions of the court, issued in favour of Republican watchers, he notes.

"This could easily end up at the Supreme Court and force an invalidation of all votes counted after Election Day in those counties that ignored the order," the publisher believes.

Meanwhile, James O'Keefe of Project Veritas unveiled a "United States Postal Service (USPS) whistleblower's" story of mail-in-ballot tampering in Pennsylvania, and later, the activist group reported that yet another USPS whistleblower from the state stepped forward alleging pro-Biden political bias on the part of the company.

"Between James O'Keefe at Project Veritas and others we have more than enough documented proof of malicious intent to mishandle ballots, create false ballots and disenfranchise real voters," Luongo asserts.

Why is US MSM Turning a Blind Eye to Fraud Concerns?

This kind of voter fraud is not unprecedented for the US, says Dankof, referring to the early electoral history of Lyndon Baines Johnson in Texas and the purported fraud involved in altering the results of the 1960 American presidential election between John F Kennedy and Richard Nixon.

Nevertheless, the mainstream media are continuing to deny the slightest possibility of fraud having been committed this year, Dankof notes, outlining a suspicious pattern that emerged during the 2020 election:

The US and European mainstream media's unwillingness to shed light on these discrepancies apparently means that they are "complicit" in the unfolding debacle, the American observers believe.

"The role of the mainstream media in covering for this fraud is as obvious as its complicity in burying the truth about FDR and Pearl Harbor, the 1960 presidential election, the Kennedy and King assassinations, the shooting of George Wallace, the USS Liberty attack, 9-11, the long criminal history of the 'Clinton Empire', the fraudulent claims about Saddam and WMDs before Bush’s invasion of Iraq, the 2016 fabrication of the Russiagate myth, and concealing as best as possible Biden’s decreased mental capacity and his criminal involvements for cash in the Burisma/Ukraine and China trade deals",  Dankof says.

© REUTERS / MARK MAKELA
Carri Dusza, a supporter of President Donald Trump, holds a placard stating "LEGAL VOTES ONLY" while shouting across the street at supporters of President-elect Joe Biden the day after a presidential election victory was called for Biden, in Philadelphia, Pennsylvania, U.S. November 8, 2020.

Why Hand Recount & Audit in Georgia is So Important

It is of utmost importance to dispel the dark clouds of doubt over the integrity of the US electoral system, the observers insist. In this respect, the hand recount in Georgia has taken on a new significance, according to Luongo.

"The hand recount in Georgia is significant because Dominion's software counted an enormous majority of the ballots in Georgia", he says. "So if there is an algorithm in place that switched votes from Trump to Biden in Georgia, it will give Trump's legal team the right to demand recounts in all the other states where that software was used."

Dominion Voting Systems denies any election issues related to its equipment and software in Georgia and other states, insisting that voter fraud concerns are "100% false": "The Georgia Secretary of State has also repeatedly stated throughout the count that '[a]s the work goes on, I want to assure Georgia voters that every legal vote was cast and accurately counted'," the company stated.

Dankof says: "The recount should occur in every battleground state in serious doubt regarding the integrity of the process, but I suspect Michigan, Pennsylvania, and Nevada will deny the request."

Biden is reportedly leading in all the six major battleground states of Georgia, Michigan, Wisconsin, Arizona, Pennsylvania and Nevada by a narrow margin. Most recently, Georgia has agreed to perform a full hand recount of ballots cast in the presidential election because of a razor-thin margin between the contenders.

Meanwhile, the Trump campaign has filed a lawsuit in Pennsylvania citing mail-in voting mismanagement and limited poll watchers’ access, and GOP senators in Michigan have urged the state to audit the votes.

Democrat Secretary of State, Kathy Boockvar, tried to get away with a flagrant violation of state law.

​On 13 November, the Republican Party of Arizona kicked off a lawsuit seeking a hand count of votes in the state by precinct. In Wisconsin, three voters filed a lawsuit in the federal court on 12 November challenging the vote in Milwaukee, Dane and Menominee over the alleged fraud, according to the Milwaukee Journal Sentinel. At the same time, on Tuesday, Donald Trump's campaign dismissed a lawsuit in Nevada over Clark County’s signature verification and election observer processes.