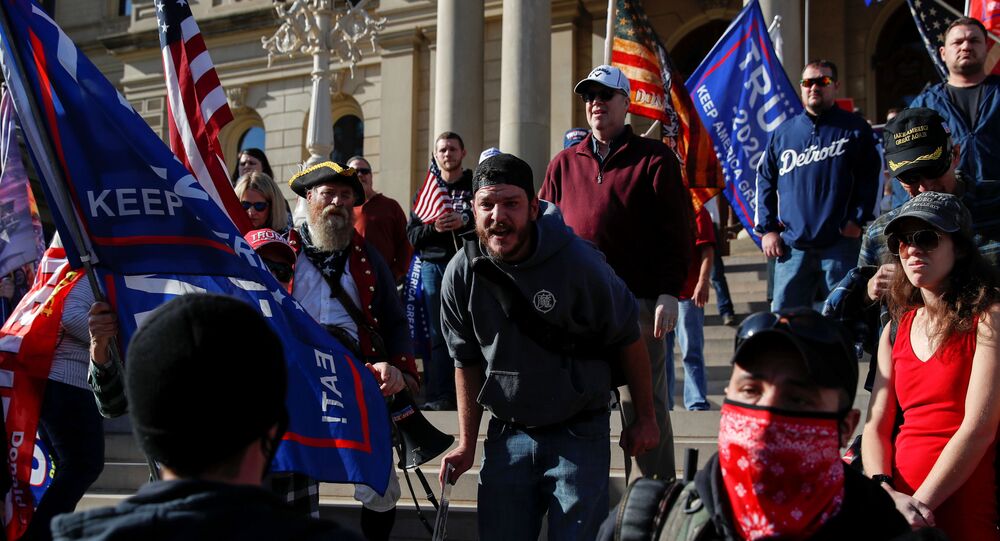 Democratic Party candidate Joe Biden declared himself winner on Saturday based on incomplete results in Pennsylvania, site of an ongoing legal battle over the validity of postal votes received after polling day.

US President Donald Trump's campaign attorney has demanded recounts in every state using the software that wrongly gave 6,000 votes to Democrats in one Michigan county.

Jay Sekulow's comments to Fox News on Friday followed revelations that the Dominion Voting Systems vote-tallying machine software that erroneously 'flipped' Antrim County in Michigan from the Republicans was being used in at least 28 states - including the key swing states where the result is being contested.

"If 30 states have used the software that there's already proved to be a glitch of 6,000 votes in one balloting area... lawyers should be... demanding a manual recount," Sekulow said. "post-election litigation is important to protect the integrity of the election process, as the president said, and to protect the constitution frankly."

This week it emerged that the Dominion software crashed voting machines in Georgia's Spalding and Morgan counties crashed for two hours on election day after the company uploaded an update to them the night before.

Spalding County election supervisor Marcia Ridley said the firm “uploaded something last night, which is not normal, and it caused a glitch.”

“That is something that they don’t ever do. I’ve never seen them update anything the day before the election,” Ridley said, adding she did not know what was in the update.

Dominion's website boasts that its 'US footprint' includes 28 states, nine of the "top 20 counties" and four of the "top 10 counties". Its software is used by 65 out of 83 counties in Michigan, where a strong early lead by Trump was reversed when mail-in ballots were counted days after the election.

Biden declared victory for himself on Saturday lunchtime after incomplete results appeared to give him an overwhelming lead in Pennsylvania - where the Trump campaign is contesting the result and the Supreme Court has ordered all late-received postal ballots be separated. No state had yet finished its vote count or officially declared for either candidate four days after the election.

© AP Photo / Evan Vucci
'Does Anyone Believe It?' Eric Trump Questions Biden's Feat of Getting More Votes Than Obama in 2012
Trump pre-empted Biden's declaration with a statement that his team would launch legal action on Monday to ensure only valid ballots were counted.

“We all know why Joe Biden is rushing to falsely pose as the winner, and why his media allies are trying so hard to help him: they don’t want the truth to be exposed," Trump said.

"This election is far from over. Joe Biden has not been certified as the winner of any states, let alone any of the highly contested states headed for mandatory recounts," he insisted. " Legal votes decide who is president, not the news media."