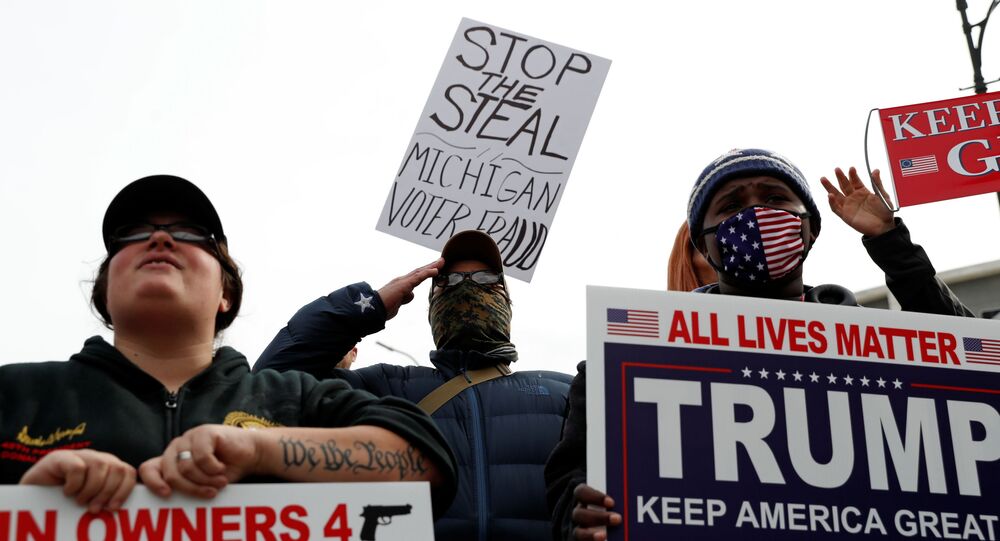 On Wednesday, Trump campaign manager Bill Stepien announced that they had filed lawsuits to halt ballot counting in Michigan, insisting that the campaign had been not provided with "meaningful access" to counting locations to observe the process, as guaranteed by Michigan law.

Republicans have claimed that a possible glitch in vote-counting software used in a Michigan county incorrectly sent thousands of votes for President Donald Trump there to Democratic nominee Joe Biden during the 3 November election.

Michigan GOP chairwoman Laura Cox told reporters on Friday that "in Antrim County, ballots were counted for Democrats that were meant for Republicans, causing a 6,000 vote swing against our candidates".

She added that "tabulating software glitched and caused a miscalculation of the votes", saying that "since then, we have now discovered that 47 counties used this same software in the same capacity".

Cox urged the counties to "closely examine their results for similar discrepancies", in a statement that came as Antrim County's Republican Clerk Sheryl Guy told the Free Press website that it's unclear if human error or a glitch caused the improper counting.

Biden is currently ahead by 146,123 votes in Michigan, with 98 percent of ballots counted amid some reports by major news networks declaring him the winner there.

Cox's remarks come a few days after Trump campaign officials announced that they had filed lawsuits to halt ballot counting in Michigan and Georgia, also taking legal action to change the ballot receipt deadline in Pennsylvania.

As far as Michigan is concerned, Bill Stepien, Trump's 2020 campaign manager, said in a statement that they had not been provided with "meaningful" access to counting locations to observe the counting process, something that is guaranteed by Michigan law.

​"We have filed suit today in the Michigan Court of Claims to halt counting until meaningful access has been granted. We also demand to review those ballots which were opened and counted while we did not have meaningful access. President Trump is committed to ensuring that all legal votes are counted in Michigan and everywhere else", the statement pointed out.

He spoke as tensions are mounting around the election results, with ballots from a spate of key battleground states still being counted amid reports that recounts may take place in the states of Arizona, Nevada, and North Carolina. Biden has so far claimed 264 electoral votes, and President Trump has 214, while the number needed to declare victory is 270.

Outcome of US Election Comes Down to Michigan, Economist Believes