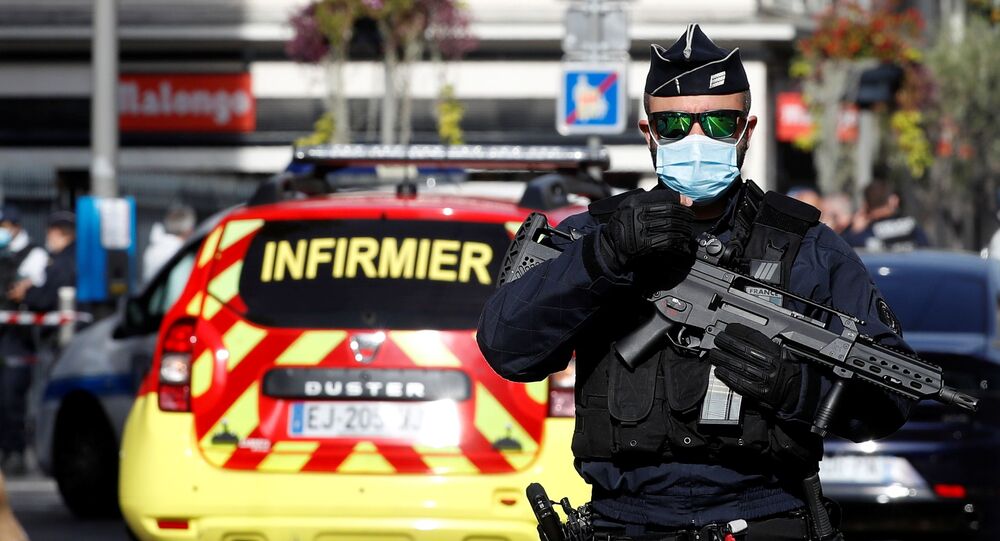 British security services and counter-terrorism policing units are "working as hard as ever" to prevent politically motivated attacks, a former police officer and expert in terrorism and security explains to Sputnik.

France has recently seen a number of violent attacks against civilians, which appear to be politically motivated in nature, including a knife attack in the city of Nice which has left three people dead including a woman who was reportedly decapitated.

Dr David Lowe is a senior research fellow at Leeds Beckett University Law School researching terrorism and security, a member of the Counter Terrorism Advisory Network to the Northeast Counter-Terrorism Unit and is a retired police officer. He researches terrorism and security, criminal law and policing. He is widely published in these areas and has been involved in assisting UK government departments in this field, as well as acting as an expert witness assisting the Metropolitan Police’s counter-terrorism unit SO15 and the Irish police, An Garda Siochana.

Dr Lowe, who authored, Terrorism: Law and Policy, explains to Sputnik that "there is a concern in the UK" that people vulnerable to being drawn into violent extremism are at greater risk  of doing so amid the COVID-19 restrictions.

Sputnik: How would you currently assess the overall risk of politically motivated violence from non-state actors within Europe?

Dr David Lowe: Using the UK’s four tier system for European states such as France, Germany, Belgium and the UK I would say it is now at ’severe’ where an attack is highly likely. In the UK the threat in Britain is ‘substantial’ (an attack is likely), while in Northern Ireland the threat level is at ‘severe’ due to the activities of the paramilitaries, in particular the dissident republican groups like the New IRA.

The main terrorist threat comes from Islamist inspired individuals/groups, but that is closely followed by the threat from the extreme far-right (neo-Nazi’s).

Sputnik: Is it at a higher or lower risk than a year ago?

Dr David Lowe: While we are not witnessing large scale attacks and the use of improvised explosive devices (IED’s), using the UK as an example, since the threat level lowered to ‘substantial’, there have been three Islamist inspired attacks (Fishmonger Hall/London Bridge, Streatham and Reading). However, key to the threat level is assessing the capability of a terrorist group such as Islamic State [Daesh] or National Action to organise and carry out an attack, which at the moment is low. However, extremists and terrorists’ use of communications [via] social media and more deeply encrypted sites is still ongoing and is capable of drawing vulnerable people into their cause.

© CC BY 2.0 / Tony Hisgett
UK 'Faces Terror Threats on Three Fronts' Though Lessons Have Been Learned, Policing Expert Says
Sputnik: Three people have been killed and a suspect shot in Nice, France in a suspected terror attack. Should this be seen as an isolated incident or as part of a wider series of attacks?

Dr David Lowe: Today, in addition to the tragic events in Nice, a French guard at the French consulate in Jeddah, Saudi Arabia was attacked and a man was shot dead in Montfavet near the southern French city of Avignon after threatening police with a handgun. Last week a teacher was killed in Paris. With the ongoing trial in Paris of the 14 defendants suspected of assisting the 2015 Charlie Hebdo terrorists there is the possibility that we are witnessing a wider series of attacks.

Sputnik: Where would you say the major threats come from both on the European continent as well as within the UK?

Sputnik: What would you say are the key motivating factors that drive individuals to commit these acts of politically motivated violence?

Dr David Lowe: For Islamist groups their narrative has not changed over the years, in essence their cause is to end Western state dominance in the Middle East and bring down any state they see as infidels (including states in the Middle East like Jordan for example) and replace it with a Wahabi style Sharia Law and adherence to fundamentalist Islam. For neo-Nazi’s it is still white supremacy and an end to liberal democracies. For nationalists like the dissident Irish republican groups in Northern Ireland it is an end of British rule and the reunification of all Irish 32 counties.

Sputnik: Is the COVID-19 pandemic, and the (some would say hysterical) climate that has emerged since, a possible accelerant for politically motivated violence?

Dr David Lowe: There is a concern in the UK that young and vulnerable people are accessing extremist sites during the sever COVID restrictions on movement. In addition to this extremist and terrorist groups are taking advantage of the pandemic and the restrictions to widen their cause via online activity,

Sputnik: Is there a risk that such attacks may spread from France to neighbouring countries? Or should these attacks be seen within their specific geographical locations?

Dr David Lowe: As I said above, they could be linked to the Charlie Hebdo trial in Paris, however complacency should not set in and all states must ensure they are working at preventing attacks. I do know that in the UK the security services and counter-terrorism policing units are still working as hard as ever in preventing attacks especially in protecting crowded places.

© REUTERS / ERIC GAILLARD
What is Known So Far About the Knife Attack in the French City of Nice
Sputnik: What do you think needs to be done to keep a handle on politically motivated violence from non-state actors?

Dr David Lowe: Two things. One is ensuring that all states’ counter-terrorism policing agencies work in co-operation, and that includes intelligence sharing, supported by Interpol and Europol (even though the UK has effectively left the EU, work with Europol and UK agencies should not be part of the Brexit negotiations as saving lives transcends any issues related to border security, customs and trade). Second is to support Prevent strategies, which are pre-criminal strategies to help and safeguard the vulnerable from being drawn towards terrorism. This is a multi-agency approach designed to help those on the periphery of extremism.