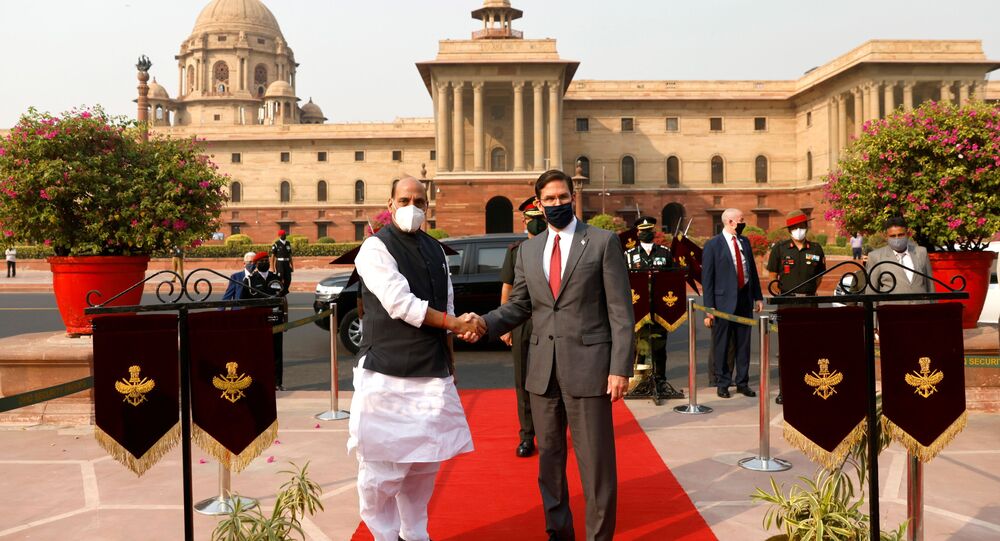 US Could Use BECA to Tweak Data, Misdirect Indian Missiles for Vested Interests: Ex-NSA Member

After years of delays, India has finally signed the fourth and the final of the foundational accords of the US to give impetus to bilateral relations. Earlier this year, the two countries shared the new draft of the Basic Exchange & Cooperation Agreement (BECA) on geo-spatial cooperation.

The Basic Exchange and Cooperation Agreement (BECA) concluded years of negotiation between the two countries which was, as per the US administration, necessary to sign to share strategic military communication and high-end technologies. Spatial data is information that comes with or revolves around a specific geographical location anywhere around or outside the Earth.

Strategic watchers claim the signing of BECA will allow the US to share sensitive satellite and sensory data that would help India in striking military targets with pinpoint accuracy using its missiles.

Bharat Karnad, a former member of India's National Security Council, and security analyst, spoke to Sputnik about the decision and how it will reshape the security structure of Asia.

Sputnik: The Basic Exchange and Cooperation Agreement (BECA) on geo-spatial cooperation is considered an important milestone in the defence and strategic relations between the two countries. Will this really boost India’s military power at a time when it is anticipating a winter clash with China?

Karnad: Not only the Trump administration but its predecessors too viewed China as an adversary and acknowledged India’s strategic usefulness in this part of the world. What was new starting in the new millennium was the unvarying insistence that India accept the 4+1 foundational accords to progress bilateral relations to a higher pitch.

© REUTERS / Danish Ismail
White House Official Indicates US Military Support For India in Border Stand-off with China
The US has, via satellites, apparently digitally mapped the entire world. In military terms, BECA promises Indian forces and weapons platforms digitised maps so obtained of, say, China and hence the precise targeting coordinates for any Chinese military assets India may care to have in its crosshairs in a conflict. It will, in theory, also permit Indian missiles and other over-the-horizon standoff munitions once fired to reach distant points by helping them correct course mid-way and align properly to target in their terminal run for precise destruction.

However, there is one major hitch in this arrangement. As dispenser and source of sensitive adversary target information, the US is in a position to monitor on real time basis the digitised data being accessed and, if its national interests of the moment are so served, to deny the user state such information and even to tweak the digitised data just enough to misdirect the fired weapon, and otherwise to dictate the outcome of such engagements. The US can then plausibly blame technical glitches in the Indian weapon for it going astray.

Sputnik: Such concerns were raised about COMCASA as well. And it is claimed that New Delhi pushed the US to change the previous draft to negate some strategic concerns.

Karnad: In my books and writings, I have detailed why the four foundational accords, while not being particularly useful to India, may be a drag and end up actually hurting India's military capability and conduct of operations, and undermining this country’s sovereignty. Take CISMOA, for example. In the guise of seamless communications between the fighting platforms of the two countries, easier penetration and hence the compromising of the most secret communications networks, including the Indian nuclear command and control links, has now been enabled.

Likewise, BECA can even be drafted in such verifiable detail as to prevent the US from doing the mischief. After all, India has no control over American satellites and, therefore, even less control over the kind of information they transmit at any time.

So, there’s no guarantee that expensive Indian weapons fired at China will not be thus fooled around with by a third party. It needs no reminding that Indian and the US interests even as regards China only overlap a bit, but are far from convergent.

Sputnik: Do we have an example of such an instance in the past that can back the speculation about this kind of possible tampering with data?

Karnad: When the intermediate range Agni missile was first test fired in May 1989 and was oriented to “target” by the US Global Positioning System (GPS). The launch was fine and the telemetry in the initial stage indicated flawless performance, but with Indian ships monitoring its progress and stationed at the planned endpoint in the Indian Ocean, the missile entering the terminal stage in its flight suddenly plunged into the sea. What happened was that the American GPS had just then “blinked” sending the missile off course! India thereafter used the Russian GPS. It is not hard to imagine such a thing happening with Indian munitions dependent on US-generated target data being misdirected in wartime. With what consequences for India can only be imagined.

Sputnik: What should India do to avoid such problems?

Karnad: India needs to be self-reliant in armaments and strategic support systems at any cost, including accelerating the pace of launching and operationalising an Indian constellation of satellites to provide the Indian military domestically made blink-proof GPS and targeting wherewithal not prey to the interests of any outside power.