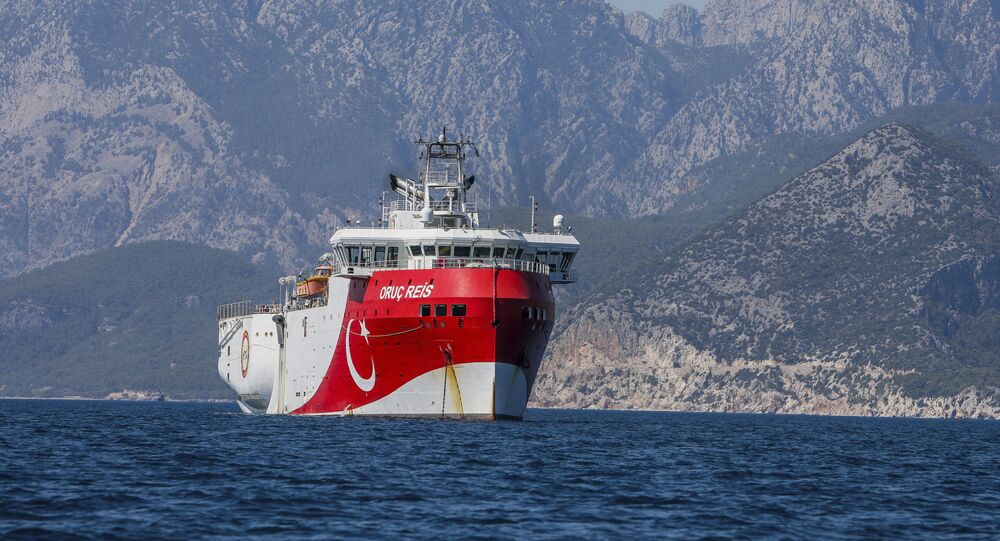 Tensions remain high in the Eastern Mediterranean as two NATO allies, Turkey and Greece, are seeking a way out of the standoff triggered by Ankara's seismic vessel Oruç Reis engaging in gas exploration in the disputed waters. Egyptian researcher Mohammad Fawzi has shed light on the brewing conflict and the balance of power in the region.

Oruç Reis's dispatch to waters claimed by Athens, Ankara and Nicosia last month came in response to the 6 August Greek-Egyptian agreement demarcating exclusive economic zones (EEZ) in the Eastern Mediterranean between the two powers. Greek Prime Minister Kyriakos Mitsotakis hailed the accords, adding that they had brought to naught the November 2019 memorandum of understanding between Turkey and Tripoli which delineated the sea in the interests of Ankara and the Government of National Accord (GNA).

However, the Turkish Foreign Ministry dismissed the Greco-Egyptian agreement as "null and void", insisting that it violates the maritime rights of both Turkey and Tripoli: "The supposedly-delimited area lies within the Turkish continental shelf, as declared to the United Nations," the statement said.

The Eastern Mediterranean geostrategic region is fraught with risks for the future of international peace and security, deems Egyptian political researcher and member of the Mediterranean Youth Foundation Mohammad Fawzi.

"The region acquires great geopolitical importance because of its economic capabilities, as the US Geological Survey has estimated the region's natural reserves at approximately 340 trillion cubic feet of natural gas," he elaborates. "After this information and recent discoveries of energy sources in the region, global attention returned to the Eastern Mediterranean."

Although the region's substantial hydrocarbon reserves present many opportunities and mechanisms for cooperation between the countries of the region, they have at the same time become an apple of discord between competing nations, according to Fawzi.

Thus, in 2010, Israel discovered a Leviathan gas field located in the Mediterranean Sea off the coast of the Jewish state. For its part, the Cypriot government claimed the rights to the Aphrodite gas reserves, located off the southern coast of the island, in 2011.

In March 2019, Greece, Cyprus, and Israel inked an intergovernmental deal, backed by both Brussels and Washington, to build an Eastern Mediterranean pipeline (EastMed) which would connect the Leviathan and Aphrodite gas fields and deliver hydrocarbons via Cyprus and Crete to the EU by 2025.

Cairo has its own piece of the Eastern Mediterranean hydrocarbon "pie": in 2015, Italian energy giant Eni discovered an offshore natural gas field named Zohr in the Egyptian sector of the sea.

Meanwhile, Turkey insists that it also has the right to benefit from the region's offshore gas bonanza: the aforementioned EastMed pipeline is supposed to pass through the sea area claimed by Ankara under its 2019 maritime deal with Tripoli.

"There are many things that hinder the cooperative approach, such as Turkish ambitions, namely, the ambitions expressed by Erdogan's description of the Eastern Mediterranean region in his 15 August remarks as a 'Blue Homeland'," argues Fawzi.

On 22 September, six countries, namely Greece, Cyprus, Italy, Egypt, Israel and Jordan, signed the charter of a new entity called the East Mediterranean Gas Organisation and aimed at promoting cooperation over natural gas in the region. The body will be headquartered in Cairo. Turkey has not been included in the organisation.

"The transformation of the Mediterranean Gas Forum into a regional organisation represents a very important development," the researcher highlights. "This step has proved the effectiveness of Egyptian diplomacy, and it is expected that there will be significant gains for Egypt from this agreement, which lies at the heart of its idea of becoming a global centre for energy production and export."

Apart from regional powers laying their claims to the Eastern Mediterranean’s rich hydrocarbon resources, external players have also signalled their growing interest in the region.

Thus, China is building ties with the Levantine and North African countries to implement its ambitious Belt and Road Initiative (BRI), an infrastructure development strategy to enhance regional connectivity and its global trade network. Beijing stepped up investments in the region and signed a comprehensive strategic partnership agreement with Egypt in 2017 which paved the way for the transportation of Chinese products from the Suez Canal through Egyptian territorial waters and to Italy's North Adriatic Sea Port.

The US has recently shifted its focus to the region as well, by increasing cooperation with Cyprus, partly lifting its embargo on the island and establishing a new security hub there. According to observers, Washington is apparently seeking to keep tabs on China's presence in the Eastern Mediterranean as well as the activities of its NATO ally, Turkey, amid Greek and Israeli attempts to proceed with the EastMed project.

The Islamic Republic of Iran also sees the Eastern Mediterranean as a key to its geostrategic plans, Mohammad Fawzi underscores. The Egyptian scholar cites the Iranian Leader's Advisor for Military Affairs, Maj. Gen. Yahya Rahim Safavi, who has repeatedly noted that the Islamic Republic's outreach stretches far beyond its borders to the Eastern Mediterranean region due to its longstanding ties with Lebanon and Syria.

The concentration of powerful regional and external players in the Eastern Mediterranean has already turned it into a potential powder keg, according to the researcher: "I think that what we are seeing in this region now is a reflection of regional and international confrontations."

How Turkey's Manoeuvres in the Eastern Mediterranean Affect Egypt

The escalation of tensions in the Eastern Mediterranean may seriously affect Egypt, which is striving to become self-sufficient in terms of natural gas and evolve into a regional energy hub, according to the researcher, who recollects how Egypt had suffered for many years after the January 2011 gas supply shortage.

The scholar highlights that Egypt has a number of advantages: first, it has undisputable rights to gas reserves in the Zohr field, as well as "the presence of a huge liquefaction capacity that can serve other gas-producing countries in the region".

"For Egypt, the Eastern Mediterranean region is a near and immediate neighbourhood, and an extension of Egyptian national security," Fawzi elaborates. "So, Egyptian diplomacy is aimed at the diversification of its foreign relations to increase the country's ability to achieve a balanced foreign policy in the region. This has been clearly demonstrated since the Cairo Declaration in November 2014, which established the principles of tripartite cooperation between Egypt, Cyprus and Greece, an agreement aimed at promoting peace, stability, security and prosperity, and ensuring the rights of the three countries."

Besides this, Egypt signed a $15 billion deal with Israel in 2018 to import roughly 2.2 trillion cubic feet of gas over a 10-year period.

While Egypt is strengthening its regional economic partnership with Greece, Cyprus and Israel, it still remains at odds with Turkey. In addition to rejecting the 6 August Greco-Egyptianian delimiting agreement, Ankara also does not recognise the 2013 maritime demarcation deal between Egypt and Cyprus, which helped Cairo obtain the giant Zohr field.

Still, the researcher does not believe that the tensions brewing in the Eastern Mediterranean will further escalate or translate into a military standoff.

"I think there are many restrictions limiting the progression of crises in the eastern Mediterranean towards military escalation," Fawzi highlights. "Turkey, for example, always threatens to pursue a military option without actually implementing it, as well as it realises that the balance of power in the Eastern Mediterranean is not in its favour."

According to the Egyptian scholar, Turkey may soon switch to a more balanced and pragmatic strategy. The researcher has drawn attention to the fact that on Tuesday, Turkey and Greece agreed to resume talks over disputed waters in the eastern Mediterranean. In addition to this, he cites the fact that Yasin Aktay, the chief advisor to Turkish President Recep Tayyip Erdogan, has recently made a positive diplomatic gesture towards Egypt, by praising the Egyptian Armed Forces as "great" and calling them "brothers".

Macron Urges Turkey to Refrain From Unilateral Actions in Mediterranean