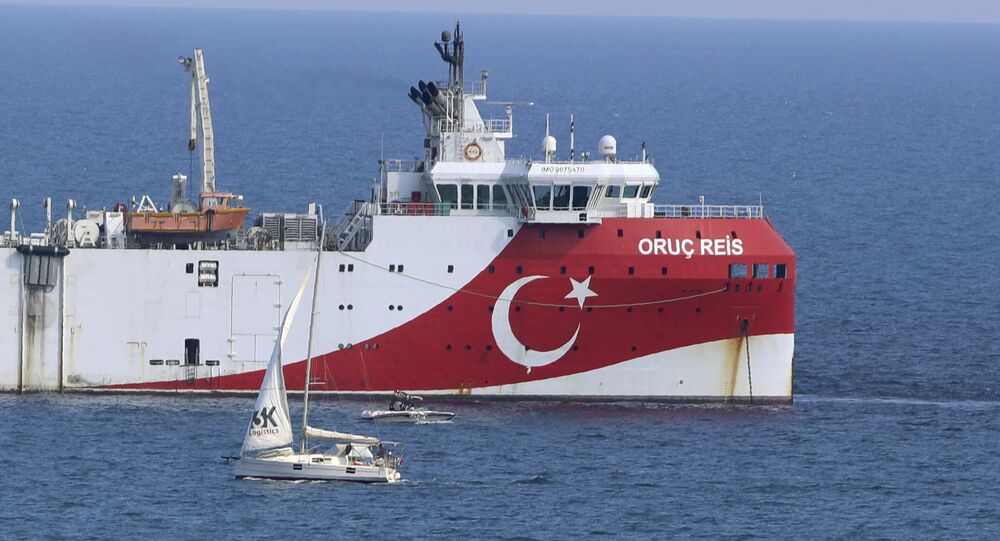 Tensions in the Eastern Mediterranean have been brewing for months around Turkey's exploration for gas in waters that Cyprus and Greece claim as their exclusive economic zones. The situation was exacerbated after Turkey sent the Oruc Reis ship, accompanied by a fleet of military vessels, to drill in what Greece considers its continental shelf.

Former Turkish Ambassador to Paris and Tripoli Uluc Ozulker is convinced Turkey and Greece are unlikely to sit down at the negotiating table and reach a compromise under the current circumstances.

“Greek-Turkish relations have historically been very unstable and undulating; there’re sharp ups and downs. There are three key points to consider when speaking about relations between the two states. A significant part of the Turkish-Greek issue is related to claims to sovereignty. In fact, there is no way out here, since, first of all, the Greek side has to abandon its Great Idea, under which Athens wants to reach the borders of ancient Greece", Ozulker said.

© AP Photo / Burhan Ozbilici
Seconds Out! Why Turkey And Greece Are Trading Verbal And Diplomatic Punches Yet Again

"Secondly, regarding all other issues, the parties should establish a dialogue channel based on mutual friendship, cooperation, and trust. Thirdly, it’s important how such a channel can be created. For example, sea tourism and navigation is of great importance both for Greece and Turkey today. It’s necessary to analyse what will happen, who will benefit and who will lose if Turkish-Greek cooperation in the Aegean Sea is established in various areas, and if relations are based on a policy of sharing the region’s resources”, he said.

According to Ozulker, the map Greece proposed based on its claims that Kastellorizo’s continental shelf is 41,000 square kilometres is unacceptable: “Turkey is carrying out geological exploration within its continental shelf, which was registered by the UN in 2018-2019. Although Greece claims that Turkey has no right to do that, it is, in fact, the Greek side that has no such right in the Mediterranean, either legally or politically. All Athens’ claims to Turkey regarding this issue are inappropriate. There may be some arguable points in the Aegean Sea, but not in the Eastern Mediterranean”.

Ozulker stressed that in the current context, Turkey and Greece are unlikely to sit down at the negotiating table and reach a compromise: “In the situation we are facing today, all issues ultimately come down to the same thing. The Greek side has a seven-point list, where Athens is expressing its claims. For its part, Turkey doesn’t even want to discuss these claims. How can the parties go to court, and what will the lawsuit be against? This is a deadlock situation. What is Greece doing in this case? It’s playing an extremely dangerous game in the region. It’s obvious that under normal conditions Greece is unable to deal with Turkey", he said.

The ex-diplomat said that Athens is appealing to the EU and calling on the West to show “solidarity”, which effectively means imposing an embargo and sanctions against Turkey in an attempt to stalemate it. According to Ozulker, Greece’s strategy can be described as “inciting” stronger players against Turkey in order to bring it down”.

“I don’t believe in the possibility of a military confrontation between the two countries; but let’s imagine that it did happen. In this context, it will be much clearer why we needed the S-400s. Everyone was wondering why we had bought them and who we were going to use them against. We didn’t buy them to use against someone. However, thanks to them, today we have the opportunity to make a kind of warning to those 'hotheads' that they shouldn’t cross the line”.

The former diplomat concluded that an open military confrontation between Turkey and Greece, as well as a compromise in the near future, is unlikely. Such a conflict can entail great risks, he believes, which is not in anyone’s interests. The status quo in Turkey’s favour is likely to remain, he said.

The Turkey-Greece tensions were exacerbated over the past few weeks as Turkey intensified drilling closer to the Greek border, ignoring calls to leave the disputed waters. Greece mobilised its armed forces and warned that it would stand up for its sovereignty by all available means, including military measures.