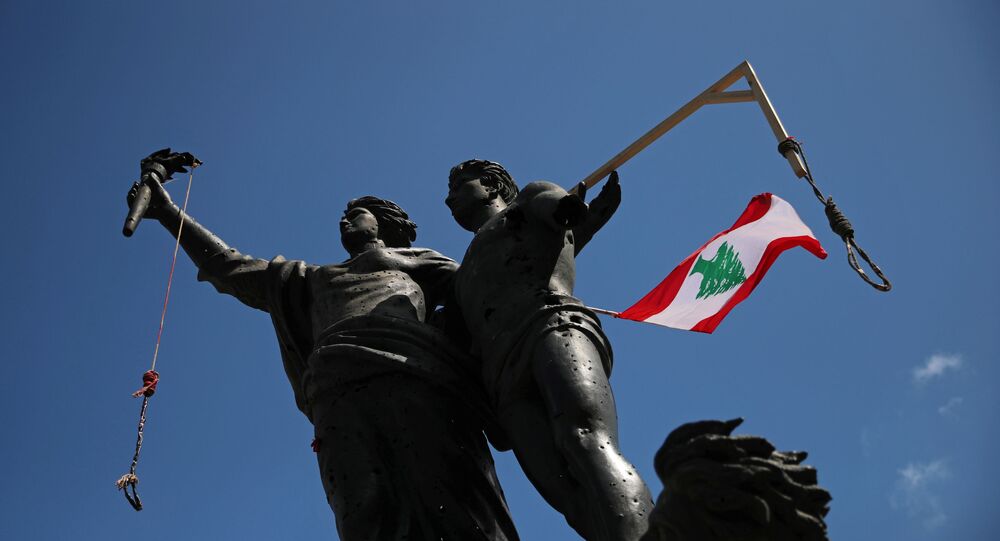 Lebanon's government stepped down on Monday night in the aftermath of a deadly blast that shattered the country's capital on 4 August and claimed the lives of more than 200 people. International observers have discussed whether the Diab cabinet’s resignation will help fix the situation and what forces could take the reins.

According to the outgoing Lebanese cabinet, the explosion was the result of the detonation of 2,750 tonnes of ammonium nitrate which had been stored in Beirut's port since 2014 without appropriate safety measures.

'A Caretaker Government of Independent Technocrats'

Addressing the nation on Monday, outgoing Prime Minister Hassan Diab lambasted Lebanon's governing political elites for creating "an apparatus of corruption bigger than the state". The prime minister characterises the deadly blast as the "earthquake that rocked the country" already hit by a protracted economic crisis and the coronavirus pandemic.

"I think that the resignation of the Lebanese government will not change much the scale of the protests, they will continue and even become worse", deems Dr Michael Barak, a senior researcher at the Moshe Dayan Centre for Middle Eastern and African Studies & the International Institute for Counter-Terrorism (ICT).

According to him, a substantial decline in the scale of the protests mostly depends on who will take the reins of the new government, insisting that "they must be politicians who are not identified with corruption".

Dr Barak believes that the main problem is Hezbollah's control of Lebanon's national institutions: "If Hezbollah will not be in the next government I think it will be easier for the international community to support the Lebanese's economy, otherwise, we will be a witness again and again to more protests and more rounds of resignations and nominations of governments", he presumes.

Lebanon's attempts to establish a new cabinet will take a long time, despite French President Emmanuel Macron's calls to establish a “new political order” in the country by 1 September, the researcher foresees: "If [we] are looking back in time, a similar situation happened in 2018-2019 when it took almost eight months to establish a government", he recollects.

The country's best chance now is to have a caretaker government of independent technocrats, presumes Yannis Koutsomitis, a political and economic analyst. These independent caretakers could carry out the much anticipated reforms in exchange for a financial support programme by the IMF, the World Bank and the international donors in order to get the economy back on track, he deems.

Earlier, the Diab government's talks with the IMF over economic aid to the country stalled over the parties' inability to reach a compromise on the economic measures proposed by the international entity.

Meanwhile, speculations are floating that the 14 March Alliance, the political bloc of former Prime Minister Saad Hariri who was forced to resign in October 2019 amid nationwide demonstrations, may now become stronger.

Hariri's potential return or the formation of a national unity government would not represent real change, opines Sam Heller, a Beirut-based analyst and adviser to the International Crisis Group.

"That type of government would just be a perpetuation and reproduction of the incumbent system", he observes. "It doesn't seem like this sort of manoeuvre would satisfy either an angry public or international donors who have lost patience with Lebanon's politicians".

According to the Beirut-based analyst, real political change may be possible "through parliamentary elections held under a new, less incumbent-friendly electoral law". However, that would take time and political will of the country's establishment to risk some of their prerogatives, he emphasises.

"If the ruling old politician guards are asked by the international community to form a united government and take part in it, we are back to square one with the same corrupted people", agrees Elijah J. Magnier, a senior political risk analyst with over 35 years of experience of covering Europe, Africa, and the Middle East.

He believes that the resignation of the Diab government is only worsening the situation: "The new government will be decided by the old guards, the same politicians who elected PM Hassan Diab and who will elect a new one", Magnier highlights. "It is not going to be an easy task, and there is a huge mistrust among all political leaders".

© AFP 2021
French President Emmanuel Macron adjusts his protective mask as he visits the Gemmayzeh neighbourhood which has suffered extensive damage due to a massive explosion in the Lebanese capital, on August, 6. 2020.

US & France May be Interested in Re-Installing Old Elites

"It seems that the US and France are pushing to re-appoint a government that looks like the one before the 17 October revolution, meaning the old elite that ruled the country under the patronage of the US might be coming back", suggests Marwa Osman, a Beirut-based journalist and political commentator.

She observes that the Diab cabinet's resignation "had nothing to do with the protests and everything to do with the international signaling that aid will not be given to this government". According to the political commentator, the outgoing government "was the first ever non-elite" cabinet and had high hopes for fighting corruption.

However, the US threw sand in its gears, signalling that touching the governing class, especially those who manage the financial system in Lebanon, is not allowed, Osman remarks.

"Go back to the red lines drawn by US Ambassador Dorothy Shea around Central Bank Governor Riad Salameh not allowing anyone to touch him despite the fact that he engineered the scheme that stole the people's money", the journalist recollects.

In May 2020, Ambassador Shea threw her weight behind Riad Salameh after the latter was subjected to criticism by Prime Minister Diab over his handling of the crisis engulfing the economy. Shea said that the US had worked with Salameh for years and warned that "if the international financial community does not have confidence, however, in the leadership of your government's top financial institutions, then I think you are not going to see the inflows of investment".

Whatever plans are being harboured by US and French policy makers, the Lebanese people are growing increasingly disenchanted with the country's authorities, the observers warn.

The situation in Lebanon is headed toward complete chaos and utter deadlock, Osman foresees.

Trump Says US Will Send Additional Aid to Lebanon