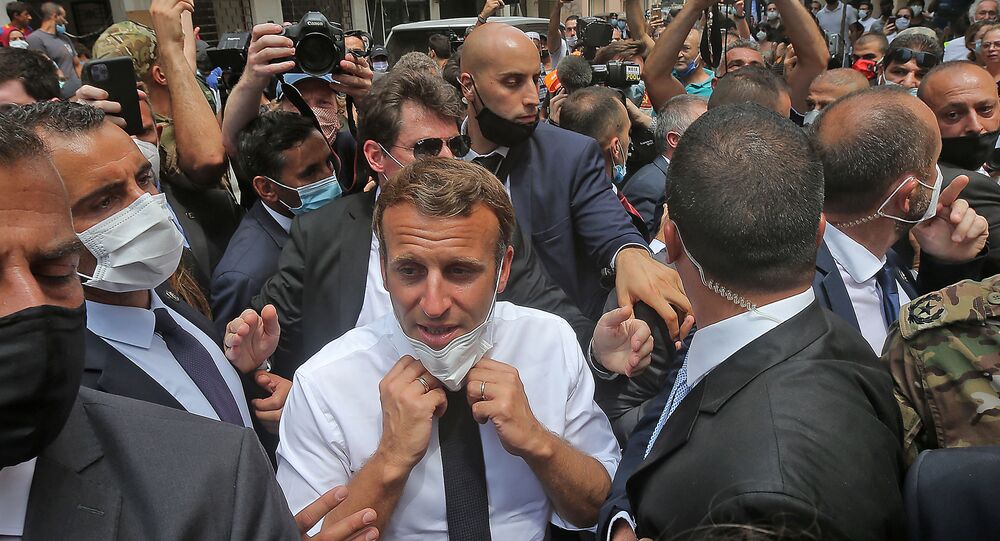 Emmanuel Macron this week enjoyed a warm welcome in blast-hit Beirut, the likes of which he hardly ever receives at home these days. It remains to be seen whether the French president, who has long tried to cast himself as a global leader, will capitalise on the opportunity offered by the tragedy and live up to his ambitions.

“France will never let Lebanon go,” President Macron said as he toured the wrecked neighbourhoods of Beirut on Thursday, an ambiguous remark given that it came from the leader of a former colonial power that once ruled Lebanon.

Macron became the first foreign head of state to visit the Lebanese capital, which was devastated by a massive explosion in the city's port on Tuesday.

The blast, blamed by Lebanese authorities on poorly stored ammonium nitrate, fuelled anti-government sentiment in the country rocked by a deepening economic crisis, a collapsing currency, and mass protests against perceived corruption and mismanagement.

That lack of trust some Lebanese people have in their own government overlapped with Macron’s willingness to position himself as a global leader.

The French president promised a “new political pact” and gave Lebanon’s government until September 1 to go ahead with a series of yet-unidentified reforms. He also did not rule out slapping sanctions on Lebanese officials if those reforms are not implemented.

Macron will host an international conference for Lebanon on Sunday to mobilise aid for the country, which appears to have no money to deal with the aftermath of the explosion on its own. He pledged the aid will be provided through NGOs so it goes “directly to the people of Lebanon” rather than to the local elites.

© AFP 2021 / -
Lebanese anti-government protesters scuffle with security forces in the Gemayzeh neighbourhood during the visit of French President Emmanuel Macron on August 6, 2020, two days after a massive explosion in the Beirut port shook the capital.

His Beirut visit has set up a potential clash with Lebanese elites: Macron called for an international probe into the causes of Tuesday’s blast, something Lebanon President Michel Aoun refused to do.

Aoun also said that no colonial power can return to Lebanon, telling reporters on Friday: “Lebanese sovereignty will not be harmed under my watch.”

France’s ties with Lebanon go back at least to the 16th century, when Ottoman rulers gave French kings the right to protect Christians in the Middle East. French is spoken in Lebanon today alongside English despite Arabic being the only official language there.

This appears to be a legacy of France’s colonial rule: the European colonial power had a League of Nations mandate of Lebanon and Syria from 1923 to 1943, which it secretly negotiated with Britain in 1916 before the looming partition of the Ottoman Empire. It was only in 1946 that French troops left the region.

© AP Photo / Hassan Ammar
Rescue teams scan the Mediterranean Sea on the site of this week's massive explosion in the port of Beirut in Beirut, Lebanon, Friday, Aug. 7, 2020. The U.N. human rights office is calling for an independent investigation into the deadly explosion, insisting "victims' calls for accountability must be heard."

Calls to renew that mandate reemerged again this week, with an online petition calling on France to “establish a clean and durable governance”. The petition had garnered over 60,000 signatures in just two days before it was closed on Friday.

“In the misfortune that is devastating their country, the Lebanese authorities surely have other things to do than organizing the arrival of this useless and theatrical tourist,” wrote Golbert Gollard, a MEP from the National Rally.

Jean-Luc Melenchon, a lawmaker from the left-wing La France Insoumise party, warned against “interference” on Macron’s part, tweeting: “Lebanon is not a French protectorate. I warn the Lebanese about Macron’s reforms: protect the claims of your citizen revolution.”

Macron himself has rejected the idea of turning Lebanon into a colony. “You can’t ask me to substitute for your leaders. It’s not possible,” he said. “There is no French solution.”