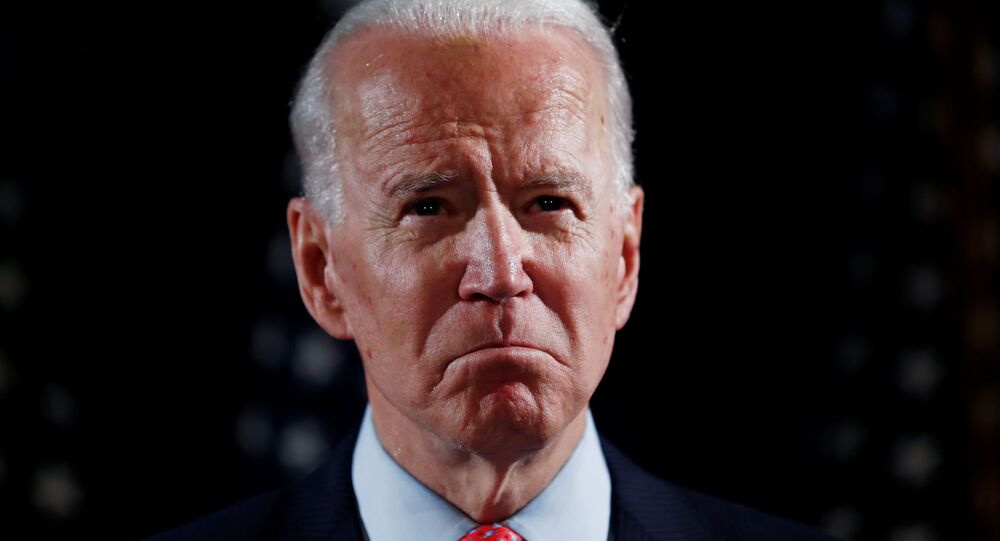 ‘Both Are Incompetent’: Whether Biden or Trump, ‘Same Apparatus is Behind Them’ - Journo

While after the latest round of Democratic Primaries on Tuesday it looks like former Vice President Joe Biden is the likely Democratic nominee, Sen. Bernie Sanders (I-VT) has not dropped out of the race and may refocus his campaign on Medicare for All as the COVID-19 novel coronavirus pandemic rages on.

Jim Kavanagh, the editor of ThePolemicist.net, joined Radio Sputnik’s Loud and Clear on Wednesday to speak about the former vice president’s wins in the March 17 primaries, Sanders’ campaign and Biden’s potential choices for his running mate.

“I think it’s effectively over for Bernie,” he told hosts Brian Becker and John Kiriakou, speaking of the Vermont senator’s campaign to secure the Democratic nomination. Biden swept the Tuesday primaries with wins in Florida, Illinois and Arizona.

At the same time, Kavanagh noted, Sanders may hold back from suspending his campaign in order to amplify his messaging about Medicare for All amid the novel coronavirus pandemic that is taking a toll on the US economy and Americans’ faith in the country’s current private health care system.

“The message of Sanders, which was radical a week ago, two weeks ago, is now the program of the Republican Party, practically,” he said, explaining that GOP lawmakers, such as Sens. Mitt Romney (R-UT) and Tom Cotton (R-AR), have proposed sending Americans adults checks to the tune of $1,000 to combat the economic downturn that has been triggered by the novel coronavirus.

My relief plan uses tax-rebate checks and expanded eligibility for federal assistance programs to put cash in the hands of low- and middle-income Americans.

“Now, nobody’s asking, ‘How are you going to pay for it?’ They’re just going to go and do what they have to do,” Kavanagh said. “The Republicans are putting forth more radical suggestions” than any Democrats in any previous debate ever were.

“They’re promoting things that the Democratic candidates would have attacked Bernie Sanders for promoting a month ago. It’s just kind of crazy to see this happening, and [the] paradigm of what’s going here is completely unique - I’ve never seen anything like it,” he asserted, referring to the fact that so many Americans are now confined to their homes and cannot leave except for essential jobs or tasks such as grocery shopping.

Kavanagh pointed out that this moment of crisis is exposing how certain things can be done as long as the government wants them to happen.

As far as Kavanagh is concerned, that system is not going to be a reality in the near future, considering the face-off in November will likely be between Biden and US President Donald Trump.

The editor highlighted that Biden exhibited behavior that was “very bizarre” on Tuesday night when he appeared to freeze while addressing his supporters. It wasn’t until his wife, Dr. Jill Biden, came into the frame that he resumed moving. After hugging and kissing his partner, the former vice president then proceeded to thank her repeatedly.

This is ELDER ABUSE...

and in any other arena, Biden’s wife and family would be called out. He doesn’t even have the cognitive ability to realize he’s at the end of this farce of a speech.

“We’re going to have either Biden or Trump as president. I mean, both of them are incompetent, but what you see is that what’s running the country is the apparatus behind them, which really doesn’t care who’s the frontman for them anyway,”

As for Biden’s potential running mate, Kavanagh said that when it comes to identity politics,  unity and the fact that he committed to choosing a woman as his vice president, Senator Kamala Harris (D-CA) appears to be a likely choice.

At the same time, he also believes Stacey Abrams, the former minority leader of the Georgia House of Representatives and Democratic candidate who lost the very contentious 2018 gubernatorial election in the state to Republican Brian Kemp, is also a possible contender.