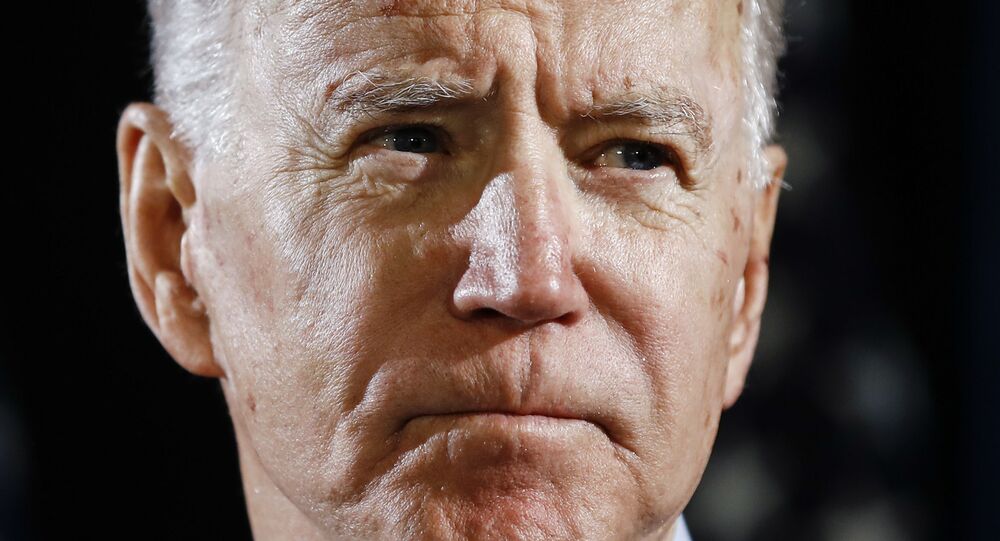 Joe Biden now has 1,147 delegates after winning three more Democratic Party primaries and there is pressure on Bernie Sanders to quit the race for the White House. But who exactly is Joseph Robinette Biden Junior?

Joe Biden has won the Democratic primaries in Florida, Illinois and Arizona and his only challenger for the nomination, Bernie Sanders, has gone off to "assess his campaign.”

The coronavirus crisis is preoccupying US politicians - Ohio cancelled its primary on Tuesday because of it - and Sanders, 78, is under pressure to quit, curtailing the primary process.

Joe Biden has broken every promise he's ever made over 30+ years in office but here's one I intend to keep - there's no way I'm voting for him in November.

​The next primaries - in Wyoming, Alaska and Hawaii - are not until 4 April and by then it is widely expected Sanders may have thrown the towel in.

If Joe Biden - dubbed "Sleepy Joe" by Donald Trump - becomes the Democratic candidate, and manages to win November’s election, what sort of President would he be?

Would he be an "agent for change"?

The omens are not good.

Trump was seen as an outsider, who would shake up Washington, while Sanders promised to transform the United States and help even up the divide between rich and poor.

Joe Biden: "Let me say especially to the young voters who have been inspired by Sen. Sanders -- I hear you. I know what's at stake. I know what we have to do." pic.twitter.com/d4qC1pZP9Y

Biden, on the other hand, has a track record of supporting the status quo and doing very little to upset big business, the Ivy League-educated establishment or any other vested interests.

Joseph Robinette Biden junior was born in Scranton, Pennsylvania in November 1942, to Catherine and Joe senior.

To be honest, nothing about his decades in public life make me enthusiastic about Biden but I feel like if you would like to see minimum wage workers get a raise that’s a pretty good reason to vote for Joe Biden. pic.twitter.com/xo5oxrP1Lg

​His father was from a wealthy background and spent his 20s sailing yachts and driving fast cars. But several business ventures failed in the early 1950s and Joe senior moved the family to Wilmington, Delaware, where they lived in a two-bedroom apartment.

Biden, whose father died in 2002, said: "My dad always said, 'Champ, the measure of a man is not how often he is knocked down, but how quickly he gets up’.”

​The young Joe was sent to a modest private school in Claymont and was sent off to college at the University of Delaware, where he graduated in 1965.

He studied to be a lawyer, was admitted to the Delaware bare in 1969 and went into practice in Wilmington.

Good morning: I’m not voting for Joe Biden under ANY circumstances in this dimension or the next & neither are millions of people who have been disenfranchised & their voices dismissed. I hope that the Democratic Party crashes & burns to oblivion if they choose to select him.

​But his heart was set on a political career and in 1972, after a mere three years working “in the real world”, he was elected as a senator.

Biden sat in Congress for 36 years. For most of that time he kept his head down and did little to rock the boat.

Funny how no one is talking about the #HunterBiden #JoeBiden #Ukraine corruption anymore... Hmmmm

​He represented Delaware, which is home to a number of consumer credit companies, and he was often referred to as the “senator from (Wilmington-based bank) MBNA.”

Voted to Lock Up More African-Americans

In 1996 he voted for the Defense of Marriage Act, which discriminated against LGBTQ couples, and he enthusiastically supported President Bill Clinton’s “tough on crime” legislation which introduced the infamous three-strikes-and-you’re-out laws which led to the incarceration of thousands of African-Americans.

Not a single person under 45 should be voting for Joe Biden in the general election.

The democrats must face a catastrophic electoral penalty

​In 2003 Biden chaired the Senate Foreign Relations Committee and had special access to the White House and the State Department.

He could have asked George W. Bush, Dick Cheney and their cohort searching questions about the plan to attack Iraq in the search for Weapons of Mass Destruction (WMDs) that did not exist.

Sleepy Joe Biden was in charge of the H1N1 Swine Flu epidemic which killed thousands of people. The response was one of the worst on record. Our response is one of the best, with fast action of border closings & a 78% Approval Rating, the highest on record. His was lowest!

​Critics say Biden did no such thing, and basically gave Bush a pass when it came to invading Iraq and triggering an anarchic vacuum, which was to attract first al-Qaeda* and then Daesh*.

As Matthew Yglesias, in an article for Vox, wrote last year: "Foreign policy experience theoretically should be a big Biden advantage over his rivals. But in reality, on one of the only foreign policy controversies voters actually paid attention to or remember, Biden got it wrong in a big way."

What happened to qualifications & experience?

This is identity politics at its worst

​In 2008 Barack Obama - who had tentatively criticised the war in Iraq - picked Biden as his running mate when he won the Democratic nomination.

He became Obama’s Vice President in January 2009 and, while a "safe pair of hands", did very little in the office.

Beau’s death was a body blow for Biden and is said to be the main reason he decided not to go for the Democratic nomination in 2016, leaving the way clear for Hillary Clinton to scoop up the moderate delegates and beat Bernie Sanders.

He’s NOT sleepy. He has NO memory problems.

America is longing for a president like this again.

He’s brilliant and just what we need to beat Trump and restore dignity to America. #ITrustJoe#VoteBlue2020

​Last year, despite his advancing age, Biden decided to throw his hat into the ring for the 2020 presidential election race.

The early stages of the race were dominated by corruption allegations against his other son Hunter, which came out when it emerged that Trump had put pressure on Ukraine's new President, Volodymyr Zelensky, to investigate him.

The probe led to Trump being impeached - he survived the vote in Congress - but the original allegations against Hunter Biden have had little impact on Joe's campaign.

* terrorist groups banned in Russia and a wide number of other countries.