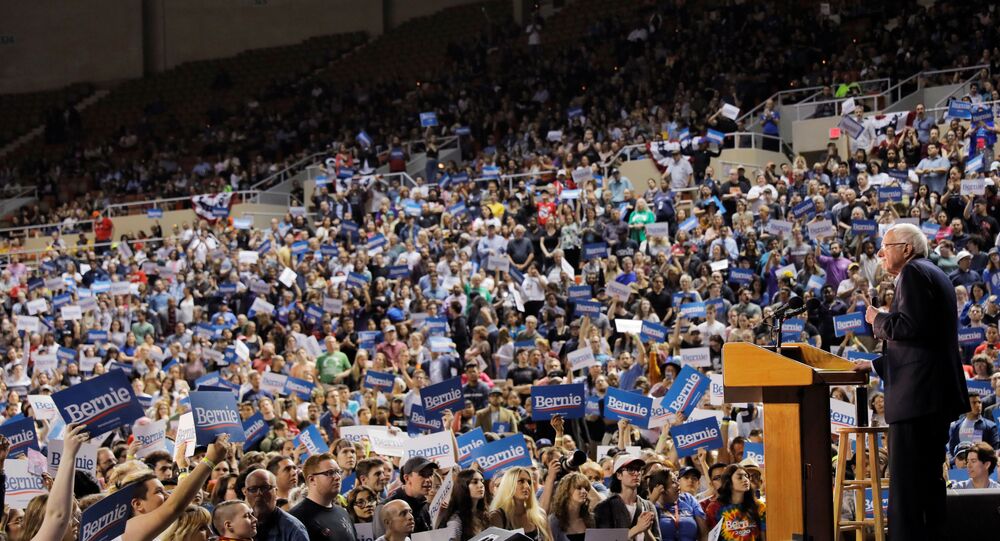 This week, both the New York Times and National Public Radio (NPR) ran pieces dependant on a revived Russiagate narrative purporting that Moscow is interfering in the US presidential election once again, but has chosen to back Senator Bernie Sanders (I-VT) this time around while also attempting to aid the campaign of US President Donald Trump.

MacLeod told hosts Bob Schlehuber and Jamarl Thomas that although the Times’ headline was “As Bernie Sanders Pushed for Closer Ties, Soviet Union Spotted Opportunity,” he believes that “if they had changed the title and maybe two sentences, you could’ve framed it as ‘Bernie Sanders was a hero trying to fight back against super-militaristic craziness in the ‘80s.’”

Former US Director of National Intelligence and retired US Air Force Lieutenant General James Clapper appeared on MSNBC’s “Meet the Press” in May 2017 and, in speaking on the topic of Russiagate and the 2016 election, said that Russians are “almost genetically driven to co-opt, penetrate [and] gain favor.”

Should our National Security Chief (under Obama) be spewing this kind of bigoted, eugenicist belief? pic.twitter.com/bHtKOX53Js

MacLeod asserted that Clapper’s 2017 statements and the New York Times piece slamming Sanders’ praise of aspects of the Soviet Union represent how xenophobia has been running rampant across corporate US media in recent years.

One is reminded of similar comments about Russians by English author Rudyard Kipling in “The Man Who Was” in 1890, when he wrote:

“Let it be clearly understood that the Russian is a delightful person till he tucks in his shirt. As an Oriental he is charming. It is only when he insists on being treated as the most easterly of western peoples instead of the most westerly of easterns that he becomes a racial anomaly extremely difficult to handle.”

“A 2017 survey found that 38% of Democrats saw Russia as an adversary, which is actually higher than at the point when Sanders went over to Russia at the height of the Cold War,” MacLeod said, also highlighting that he recently came across a survey which showed “the majority of Americans were not aware that the United States has interfered in other countries’ elections - let alone overthrown governments.”

“In 1995, of course, the US interfered in the Russian election, to great fanfare in the US media,” MacLeod pointed out, referring to the July 15, 1996 issue of Time Magazine entitled “Yanks to the Rescue: The Secret Story of How American Advisers Helped Yeltsin Win.”

“That really set the tone for the next 20 years in Russia, frankly,” he argued, ”and it’s something they haven’t really been able to recover from.”

MacLeod contended that even despite the media’s attempt to harken back to the Cold War era and demonize non-capitalistic systems, millennials and members of Generation Z who have responded to opinion polls are open to and even in favor of forms of socialism, “whereas older people are really stuck in that mindset that communism is something to be uniquely feared at all times and Bernie Sanders is a super-threat to the nation.”

It wasn’t just the New York Times that tried to assign a Russiagate narrative to Sanders this week. NPR also ran a piece on “How Russia Is Trying To Boost Bernie Sanders' Campaign,” which ironically opened by saying, “It's 2016 all over again — at least from Russia's perspective.”

Meanwhile the Washington Post had mainstream media and centrist Democrats in a frenzy last month over unsubstantiated claims that Russia was looking to boost Sanders’ campaign.

In NPR’s article, Clint Watts of the Foreign Policy Research Institute provided the outlet with data points from his surveillance of RT and Sputnik.

“While monitoring coverage on Russian news agencies RT and Sputnik, Watts has noticed an ongoing trend: While most coverage remains neutral, Sanders receives substantially better coverage than his opponents,” the NPR article claimed.

MacLeod argued that the outlet could have saved its research dollars and simply asked him whether there would be more pro-Sanders coverage.

“I could’ve told you it, because it’s obvious,” he stated. “The reason is that journalists who actually support Sanders just can’t get a job in corporate, mainstream media. They’d either have to eke out a career in alternative media, getting $5 Patreon donations or work for a foreign state media.”

Last month, ABC News suspended journalist David Wright after he told Project Veritas while being recorded by a hidden device that “I would consider myself a socialist” because he believes there “should be national health insurance” and that there are “too many billionaires.”

“Meanwhile, MSNBC hosts like Chuck Todd can call Sanders’ supporters ‘brownshirts,’ linking the first Jewish American candidate for president’s supporters to the Nazi groups that killed his family,” MacLeod explained. “And Chuck Todd will probably get a pay rise coming up.”

“Frankly, the media is not interested in critiquing itself, unless it’s a very sort of marginal and superficial critique that doesn’t really get down to the actual levels of power,” he concluded.