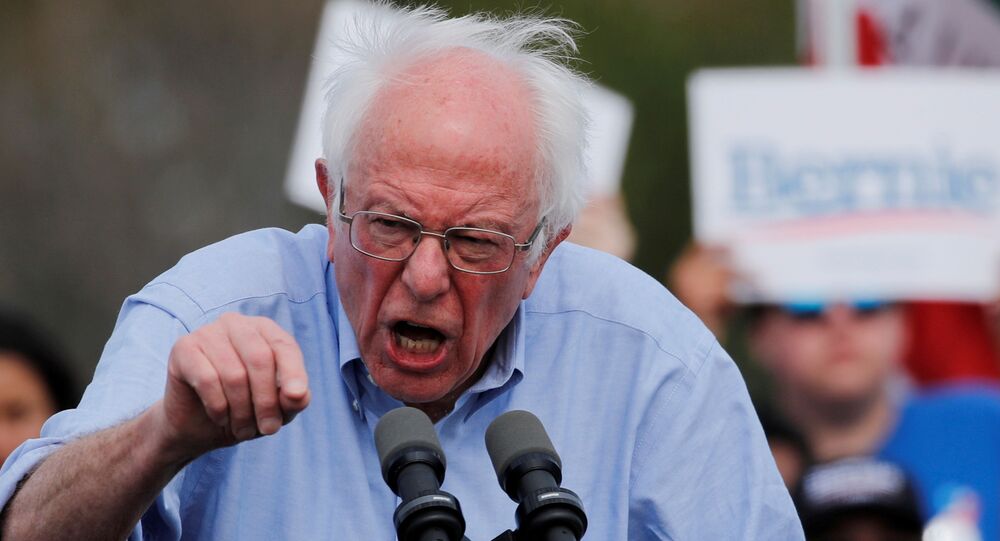 Like clockwork, accusations of Russian interference are once again being leveled in the 2020 elections. However, between US intelligence’s vague, undefined claims and corporate media’s willingness to throw around accusations in the name of ratings occurs “a convergence of cynical interests” intending to sabotage Bernie Sanders’ popular campaign.

Citing “people familiar with the matter,” the Washington Post is now claiming that the campaign of Democratic presidential candidate Senator Bernie Sanders (I-VT) is being backed by Russia. At the same time, neither the outlet nor the major social media platforms have been able to provide evidence for that assertion.

On Friday afternoon, the Washington Post reported that Sanders was briefed by US officials that Russia is attempting to meddle in the 2020 US presidential election and assist the senator’s campaign.

Despite the weight of the assertion, the outlet noted that “it is not clear what form that Russian assistance has taken,” and Sanders was quick to clarify that he does not welcome such actions if the report is true.

“I don’t care, frankly, who [Russian President Vladimir] Putin wants to be president,” Sanders told the Washington Post in a statement. “My message to Putin is clear: Stay out of American elections, and as president I will make sure that you do.”

During NBC’s Democratic debate on Wednesday night, the senator responded to questions about the behavior of his “Bernie Bros” supporters on social media - particularly Twitter - and said that the accounts spewing sexist and combative rhetoric may be coming from Russia.

“Let me say something else about this - not being too paranoid. All of us remember 2016, and what we remember is efforts by Russians and others to try to interfere in our elections and divide us up. I’m not saying that’s happening, but it would not shock me,” Sanders said.

Bernie Sanders is now suggesting (without evidence) that Russia is behind his supporters' social media pic.twitter.com/8oCj8mrmKa

Twitter was swift to respond to allegations that its platform had been a medium for a foreign interference campaign, saying in a Thursday statement to CNBC that it had no evidence to back Sanders’ suggestion.

“Using technology and human review in concert, we proactively monitor Twitter to identify attempts at platform manipulation and mitigate them,” the company said. “As is standard, if we have reasonable evidence of state-backed information operations, we’ll disclose them.”

Likewise, Facebook told CNBC earlier this week that it had no evidence of Russians being associated with supporters of Sanders’ campaign. However, following the publication of the Washington Post’s article, Facebook declined to comment on a Reuters request on the matter, backing away from an earlier response to the news service stating it had not seen evidence of such assistance.

One of corporate media’s main criticisms of Sanders hinges on the online conduct of the “Bernie Bros” and the Democratic presidential candidate’s inability to put a stop to their cyberbullying.

CNN just did a segment about Pete being called a rat pic.twitter.com/ixySrBdlXX

Now, it would appear as if the Washington Post’s anonymous scoop conflicts with the media’s purported narrative and sides with the word of US intelligence.

...to the remark Sanders made about “Bernie Bros” possibly being Russian trolls, whether that is true or not. So now, because of panic maintained by Democrats for past 4-5 years, it appears establishment no longer can use “Bernie Bros” as an attack on Sanders anymore...

Of course, Sanders rival and former New York Mayor Mike Bloomberg didn’t pass up the opportunity to take a swipe at the Vermont senator, tweeting a garbled attempt at Sanders’ slogan “feel the Bern” in Russian Friday night. Instead, it came out something like “to feel a burn.”

Word of Russian interference would more than likely come from the same intelligence team that informed lawmakers earlier this week that the Kremlin had begun interfering in the 2020 presidential election in order to get US President Donald Trump re-elected. According to reports, Trump was outraged that Congress was briefed on the matter before him and, as a result, fired acting Director of National Intelligence Joseph McGuire over his disloyalty.

As was the case with Russia’s alleged aid to Sanders, the sources were unable to detail how Russia planned to meddle in the 2020 presidential election in order to support Trump.

The US president took to social media on Friday and pushed back against the claims, calling the allegation of Russian assistance in the upcoming election a “hoax.”

“This is not about a real threat to the election. This is about a narrow circle of US elites exploiting Russian fearmongering for their own interests,” Aaron Maté, a journalist with The Grayzone, told Radio Sputnik’s Loud and Clear on Friday.

The journalist told hosts Brian Becker and John Kiriakou that the new allegations indicate Sanders’ campaign is the next front that these elites are targeting, because the candidate is a “progressive force, with a movement behind him, who is now the front-runner. And that, naturally, is going to panic the same people who have been blaming Russia for their loss since 2016.”

“It’s very obvious that there is a convergence of cynical interests, intelligence officials and failed Democratic elites,” Maté added.

The Friday article by the Washington Post noted that US prosecutors had exposed a “Russian effort in 2016 to use social media to boost Sanders’s campaign against Hillary Clinton” and “dissension in the American electorate and ultimately help elect Donald Trump.”

The use of the term “Russian effort” appears to be conveniently vague in this context.

Maté highlighted how former special counsel Robert Mueller admitted that he could prove no connection between the indicted Russian troll farm Internet Research Agency and the Kremlin.

“That’s putting aside the fact that if you take this Russian troll farm indictment seriously for a second [and] you look at their actual ads, most of them aired after the 2016 [presidential] election. Most of them had nothing to do with the election,” he pointed out.

“They were about buff Bernie [Sanders] memes and other stuff that could not possibly convince a single person to change their votes. But yet, Hillary Clinton has said that Russian trolls were responsible for suppressing the black vote in Michigan.”

Maté went on to assert that this entire Trump-Russia narrative was built in order to encourage a hawkish, Cold War agenda that has persisted despite the fact that the US president’s policies throughout his term have not necessarily benefited Russia.

“Trump has torn up the [Intermediate-Range Nuclear Forces] Treaty, a major Cold War treaty that limited a major class of nuclear weapons. He’s now threatening to not renew New START; he has increased war games on Russia’s borders; he’s trying to overthrow Russia’s key ally in South America, Venezuela; he tore up the Iran Nuclear Deal and killed [General] Qasem Soleimani,” he pointed out. Nevertheless, these key details about Trump’s policies toward Russia are glossed over in media coverage of the Russiagate narrative.