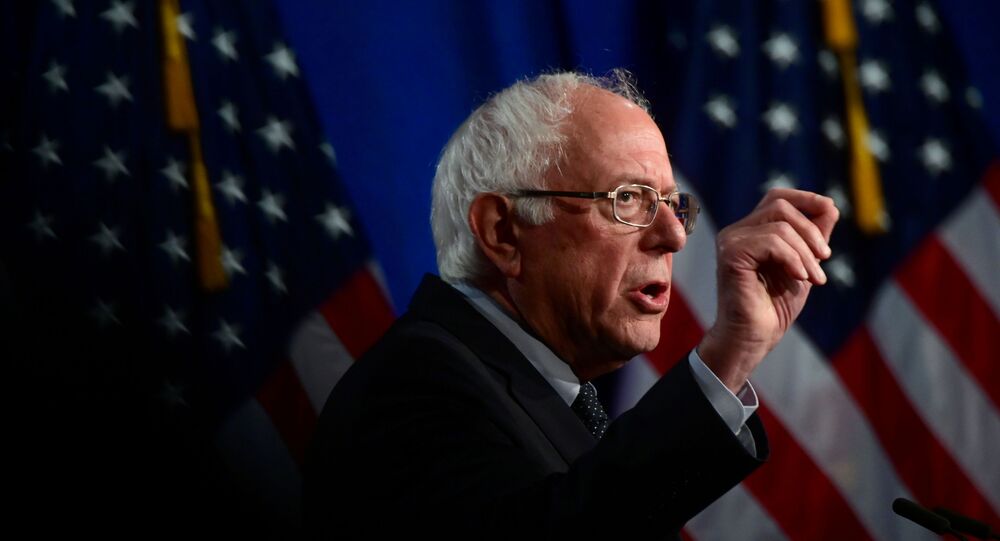 Russophobia was in full effect over the weekend as mainstream outlets such as CNN, MSNBC and the Washington Post were actively engaged in the promotion of unsubstantiated claims that Russia is looking to interfere in the 2020 presidential election by aiding both US President Donald Trump and Democratic front-runner Senator Bernie Sanders (I-VT).

Gareth Porter, a historian, investigative journalist and analyst specializing in US national security policy who is the author of “Manufactured Crisis: The Untold Story of the Iran Nuclear Scare,” joined Radio Sputnik’s Loud and Clear on Monday and provided his thoughts one the revived Russiagate narrative that corporate media is now trying to attach to Democratic front-runner Sanders.

“Casting doubt on both Sanders and Trump at this point is in the interest of the Pentagon, because those are the two figures that have given them the most difficulty in American politics over the past several years,” Porter told hosts Brian Becker and John Kiriakou.

“The only influence on American public opinion that was casting any doubt on the electoral institutions [was] the US government - particularly the Department of Homeland Security [DHS] … which circulated that lie and, of course, the mainstream media, who picked it up and made that a huge story,” he said.

MSNBC host Chris Matthews trended on Twitter over the weekend and had netizens calling for his firing after, in reference to Sanders’ campaign and then-projected win in Nevada, he recounted the conversation between French Premier Paul Reynaud and British Prime Minister Winston Churchill regarding the 1940 Nazi invasion of France.

"I was reading last night about the fall of France in the summer of 1940," Matthews said. "And the general, Reynaud, calls up Churchill and says, 'It's over.' And Churchill says, 'How can that be? You've got the greatest army in Europe. How can it be over?' He said, 'It's over.'"

MSNBC’s Chris Matthews likens Sanders victory in Nevada to Nazi Germany overrunning France in 1940: “It’s too late to stop him … it’s over” pic.twitter.com/6GJetLoDkq

Earlier this month, social media users also called for the firing Chuck Todd, moderator of MSNBC’s “Meet the Press,” after he quoted a statement from The Bulwark chief editor Jonathan Last which referred to supporters of Sanders as a “digital brownshirt brigade” - referencing the early Nazi militia founded by Nazi Party leader Adolf Hitler in the early 1920s.

Here is a higher quality and more complete video of @chucktodd comparing supporters of the Jewish frontrunner to Nazispic.twitter.com/IDg1NzQTF5

“Obviously the major corporate media outlets are not fans of Bernie Sanders. They are aligned with the centrist Democrats, overwhelmingly,” Porter said. However, he added, their attempts to damage Sanders’ campaign by comparing it to the Nazi Party or saying that he is the favorite of the Kremlin are actually backfiring.

“It’s going to become more and more clear as this campaign moves toward its climax that … the press institutions of this country are discrediting themselves … and they are legacy institutions that don’t really have much of a future,” Porter asserted.

"We have seen no evidence in open sources during this election cycle that an online community of Sanders supporters, known as Bernie bros, were catalyzed by what Sanders suggested could be ‘Russian interference,’” Graham Brookie, director of the Atlantic Council’s Digital Forensic Research Lab, told the Washington Post following last Tuesday’s Nevada Democratic debate and before the outlet broke the story Friday about Russia’s alleged preference for Sanders in the Democratic primary.

Brookie, whose research lab tracks disinformation on social media platforms, added that “any candidate or public official casually introducing the possibility of Russian influence without providing any evidence or context creates a specter of interference that makes responding to real interference harder.”

Meanwhile, mainstream media outlets have been relying on the Russiagate narrative for the past several years, orchestrating their own so-called “specter of interference.”

Porter said that it’s clear the US intelligence community is engaging in a political ploy at the moment, and while the matter should be investigated, it’s unlikely “under the present circumstances.”

He reiterated that this entire storyline began with the DHS alleging that Russians were trying to hack into US election institutions, yet produced no evidence of such an act. “It’s an offense against democracy for the institutions of the intelligence community to be pushing for this idea, for which … they have not produced the slightest scintilla of evidence. They haven’t suggested that they actually have any evidence for it,” Porter noted