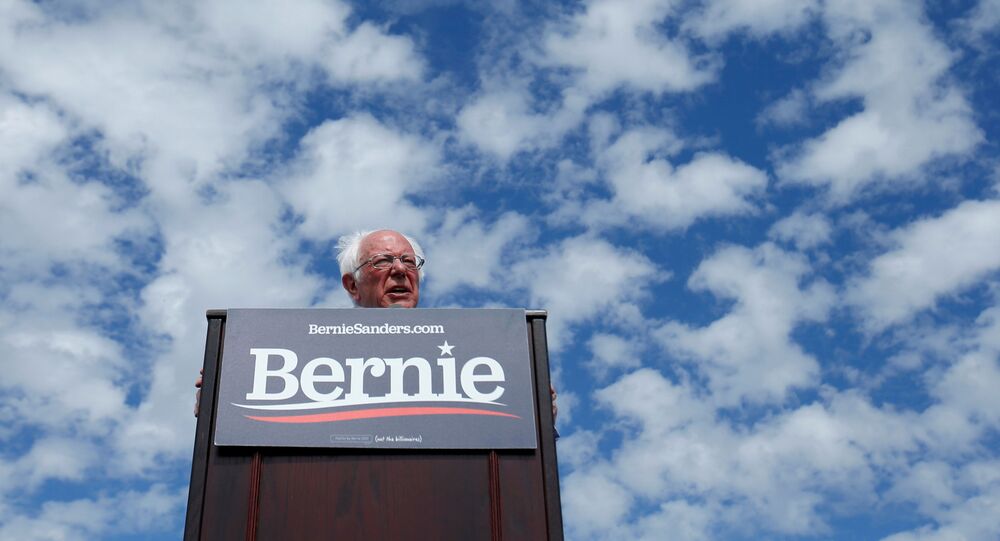 The senator from Vermont and the longest-serving independent in congressional history, Sanders was also reported to be leading in all 10 national polls this week ahead of the Nevada Democratic caucus.

"Our multiracial, multigenerational movement is not only going to win in Nevada. It is going to sweep this country", Sanders commented on Twitter.

We are building an unprecedented grassroots movement, and together, there is nothing we cannot accomplish.

Let’s take the next step and win it all. Chip in here: https://t.co/K75dGyYsR6 pic.twitter.com/1sEuhgy9Kb

Don't tell @realDonaldTrump this because he'll get very nervous—we're going to beat him in Texas.

Sanders was projected to win the Democratic Caucus in Nevada with 55.3 percent, Fox News reported on Saturday. Joe Biden was supposed to come in second place with 17.5 percent, Elizabeth Warren was expected to gain 9.4 percent and Pete Buttigieg - 8.5 percent.

MSNBC also projected Sanders to win with 44.7 percent, followed by Biden (19.5 percent), Buttigieg (15.6 percent) and Warren (11.8 percent). He was gaining the largest support share among Hispanics, voters aged between 17 and 44, and non-college graduates.

According to Politico, Sanders was expected to win in Nevada gaining 54.1 percent, followed by Biden, Warren, and Buttigieg.

Meanwhile, an Edison Research poll said Sanders is leading in the first preference vote, obtaining the largest support share from Hispanics, union families, and white college-educated women. It also says that the senator has obtained the largest share of votes from all age groups, except those over 65. Among the moderates in the Nevada entrance poll, the vote was largely split between Sanders, Biden, and Buttigieg.

Mayor of New York City Bill de Blasio took to Twitter to slam Buttigieg and show his support for Sanders, assuming that he could beat Trump with a team of "true multi-racial coalition of working Americans".

And hey @PeteButtigieg, try to not be so smug when you just got your ass kicked. You know how we form a winning coalition to beat Trump? With a true multi-racial coalition of working Americans: something @BernieSanders has proven he can do + you haven’t. Dude, show some humility

Representative Alexandria Ocasio-Cortez, known as an enthusiastic supporter of Sanders, also thanked Nevada tweeting in the Spanish language and got a retweet from Sanders.

Actor Mark Ruffalo, also a strong critic of Donald Trump, said it was "time for another approach" and called for further support for Sanders.

Centrist Democrat brothers and sisters, all we are saying is give Bernie (us) a chance. It’s time for another approach. We have backed you up for decades.

Earlier in the day, President Donald Trump took to Twitter to congratulate Bernie on the projected win.

Looks like Crazy Bernie is doing well in the Great State of Nevada. Biden & the rest look weak, & no way Mini Mike can restart his campaign after the worst debate performance in the history of Presidential Debates. Congratulations Bernie, & don’t let them take it away from you!

Nevada voters went to the polls for their caucus on Saturday, with 36 of the state's 48 delegates to be chosen based on the results of the voting.

Earlier, Sanders won the popular vote by a clear margin in both the first and second rounds in Iowa and held a narrow victory in New Hampshire. In Iowa, however, he got fewer delegates despite beating Buttigieg in total votes.

Sanders comes from the "socialist wing" of the Democratic party and has been criticised by other Democratic candidates for the costs of his Medicare for All, which could mean higher corporate taxes, while his programme also includes other social safety net plans, greater regulation around stock buybacks and corporate governance.