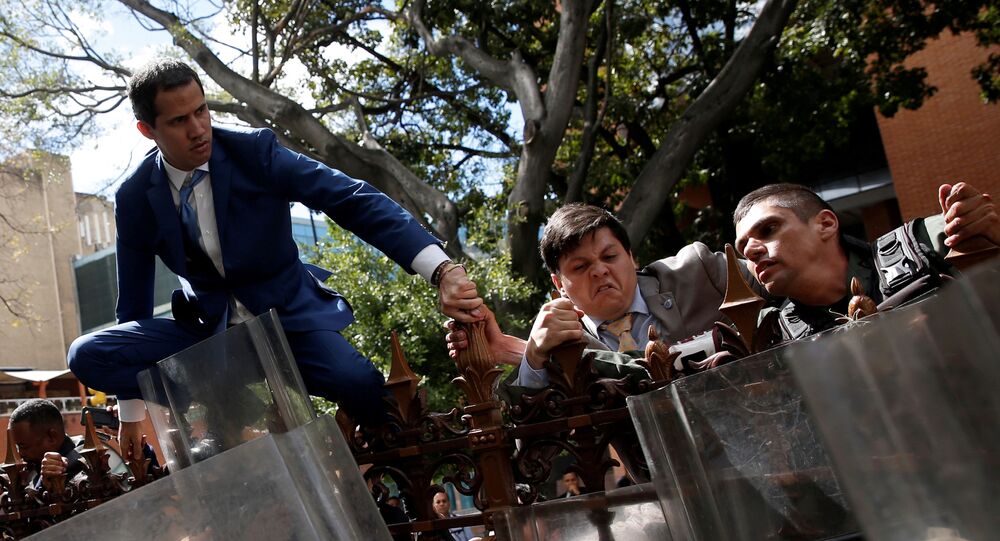 Venezuela's self-proclaimed "interim president" Juan Guaido continues his struggle for power while the nation is bracing for a 2020 parliamentary vote to elect the 167 deputies of the National Assembly.

His influence continues to wane since Luis Parra was elected the new speaker of the country's parliament on 5 January. The speaker's role is crucial for Guaido being the only basis of his claim to be Venezuela's "legitimate interim president". In order to retain his positions the opposition lawmaker called a "parallel" parliament session after his supporters declared his "re-election".

Guaido Losing Grip, But US Has Nobody in Sight to Replace Him

Having defied his failure to maintain leadership of the National Assembly, the self-proclaimed interim president called for more protests against Venezuelan President Nicolas Maduro. On 20 January, US Secretary of State Mike Pompeo met with Guaido in Bogota, Colombia, and voiced his solidarity with the opposition lawmaker.

"The US and their allies will support Guaidó until the moment they find someone better to serve their interests as a neo-colonial proconsul", explains Professor Heinz Dieterich, an adviser to the late Venezuelan president Hugo Chavez, who now manages a research centre at the Universidad Autonoma Metropolitana in Mexico City. "At the moment, however, there is nobody in sight who can play that role. So, Washington will increase the pressure on Caracas and stick with its joker, who has close ties to Colombian drug lords and paramilitary groups".

According to the professor, the opposition parties are currently busy fighting among themselves for control over the Venezuelan state. "Venezuela's citizens rightly see them as corrupt and opportunistic and there is no political leader capable of galvanising the masses", he remarks.

Venezuelan President Maduro, meanwhile, remains at the helm of the country, despite US Venezuela envoy Elliot Abrams' earlier assertions that Maduro would "fall" by the end of 2019.

President @NicolasMaduro arrives at the Federal Legislative Palace ahead of the President's annual address before the National Constituent Assembly. @madeleintlSUR pic.twitter.com/zYStcsjycL

​Juan Martin Gonzalez Cabañas, Argentine geopolitical analyst at Dossier Geopolitico, believes that so far the main cause behind the sustainability of the Maduro government "has been the support of the Venezuelan armed forces and social sectors which benefited from the policies of Chavismo, as well as the lack of perspectives and capabilities of the opposition".

At the same time, one of the main pivots to mitigate economic restrictions imposed by the US and its allies on the Maduro government is the "support of extra continental actors, such as China and Russia", he highlights.

The former adviser to the late Venezuelan president Hugo Chavez also emphasises the role of Moscow and Beijing elaborating that "several factors play a role".

"About 80 percent of Venezuela's food and medicine consumption must be imported, because the national economy is destroyed as a productive system", the professor says. "So, how do they pay for it? 94 percent of all officially registered dollar imports result from oil exports, basically to China and Russia. These incomes cannot be blocked by Trump, because both countries are too powerful. Both countries also provide technical, military, and financial help".

Dieterich notes that "another income source are precious metal exports", while "remittances from exiled citizens" as well as a "sell-out of natural and social resources" of the country also keep the economy afloat.

© AFP 2021 / MARCELO GARCIA
Venezuela's President Nicolas Maduro during a meeting with members of the Popular Units of Integral Defense, in Caracas

A US-Venezuela Deal or Continuous Impasse?

However, both Dieterich and Gonzalez Cabañas agree that there's no room for significant improvement for the Venezuelan economy in the medium and short term.

According to the professor "rampant inflation, dwindling international reserves and increasing aggression from Washington, destroy the basic fundamentals of the economy". He suggests that this situation may lead to a potential "agreement" between Maduro and Donald Trump ahead of the upcoming parliamentary elections this year.

On 18 January, in an interview with The Washington Post, Venezuelan President Nicolas Maduro highlighted that he is still in control of Venezuela and is open to dialogue with the US to solve their confrontational relationship.

Gonzalez Cabañas holds a slightly different stance: though negative factors may continue to shatter Maduro's positions, given "the lack of vitality of other political forces, the situation will continue in a stalemate, in an impasse", he thinks.

He opines that Caracas would have been capable of breaking the stalemate if its neighbours lend a helping hand to it, stressing that Latin American solidarity is the key to withstanding Washington's pressure in the region.

"Although it is supported by other extra-continental actors, Venezuela needs the support, the guarantees, and fluid relations with the countries of its own region, to have a more favourable perspective, and this is very complicated currently", he said, referring to the fact that most Latin American nations jumped to recognise Guaido after he declared himself interim president back in January 2019.

From a geopolitical standpoint, "the situation in the global balance of support for Venezuela and the Maduro government is very complex", Gonzalez Cabañas says.

"A realistic position in international relations (one that seeks rationality between risks and benefits in foreign action) would tell us that the continental [Eurasian] powers will not 'over'-engage in the Venezuelan situation, because they are involved on several fronts, including some in even more strategic regions in this 'Great Game', so it would not make much sense for them get too involved in a relatively peripheral front in their global bid", the geopolitical analyst presumes.

For his part, Heinz Dieterich believes that only major geopolitical players are capable of untying the Venezuelan knot. According to him, "the internal opposition of the political parties will not decide anything in the power struggle for the future of Venezuela".

"The decisions are being made on a geopolitical level between the four global superpowers, the US, Russia, China, and the European Union", he presumes, drawing parallels between the current situation in Libya and Syria.