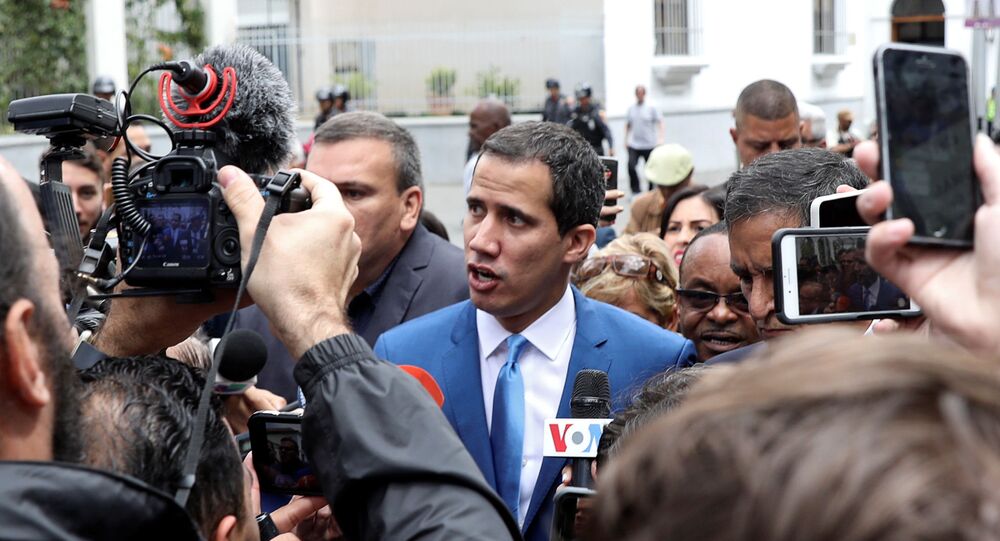 The US-backed 36-year-old opposition lawmaker Juan Guaido is continuing to lose his grip, while Nicolas Maduro's positions remain unwavering, says Brazilian scholar Gustavo Guerreiro weighing up what strategy the US is now likely to choose.

On 5 January, Venezuela's self-proclaimed interim president Juan Guaido was ousted from his position as chief of the National Assembly with Luis Parra elected as the new speaker of the country's Parliament.

As the speaker role was the basis of Guaido's claim to be Venezuela's "legitimate head of state" his supporters held a parallel vote establishing him as the chamber's leader. He was inaugurated in a "parallel" Parliament session though he didn’t appear to have the required 84 deputies who ought to be present. Nevertheless, his "re-election" was immediately recognised by the White House, while Moscow congratulated new Venezuelan National Assembly Speaker Luis Parra on his election.

Gustavo Guerreiro, executive editor of the journal World Tensions and a member of the Brazilian Centre for Solidarity with Peoples and Fight for Peace (CEBRAPAZ) has explained the new episode in Guiado's pursuit of power in Venezuela.

Sputnik: What's your take on the recent development? What's behind Guaido's failure to maintain strong positions in the country's Parliament?

Gustavo Guerreiro: Juan Guaido was not an alternative of democratic opposition to Maduro in Venezuela. He was simply a scammer who, in the words of right-wing deputy Jose Brito "used the people to consolidate not the forces of change, but their own position of power". Guaido lost the little credibility he still possessed before proclaiming himself president. This is explicit for various sectors of the Venezuelan opposition.

Juan Guaido chose to remain outside of the National Assembly, opting to stay back with deputy Gilberto Sojo pictured here (w/moustache). Guaido refused to enter on an "all or none" basis, thus abstaining from the vote. His colleagues were inside. @teleSURenglish / @madeleintlSUR pic.twitter.com/YtDun85NYz

​The National Assembly is made up of 167 deputies and 84 parliamentarians are needed to reach the minimum quorum, which would have happened, according to the participants in the election. At the time of the election there were 104 deputies, where 81 voted in favour and 23 against the composition of the new board of directors of the Assembly.

Once the National Assembly's new head was sworn in, Guaido's opposition faction came out from the hall to tell him to enter. He had his reasons for remaining outside: He was stalling; he didn't have the necessary votes without those barred for criminal offences. @madeleintlSUR pic.twitter.com/r1UbrIQaCZ

​The process, besides being legitimate, had broad parliamentary participation. On the day of the election all the opposing forces were present in Congress. Guaido remained outside the Legislative Palace because he knew he did not have enough votes to get himself re-elected. From there he forged a situation in which he said he was prevented from entering. It's not true.

Deputy Pedro Carreno, one of Chavismo's leaders in Congress, appears in a video moments later talking to an opposing deputy and the security chief of the National Assembly, a Bolivarian National Guard commander. Carreno, predicting the manoeuvre, made it clear that Guaido was free to enter. However, five former deputies who were accompanying him were barred from entering, as their terms were annulled due to convictions in court.

Sputnik: What do you make of earlier reports that Donald Trump has lost his trust in Guaido as the leader of the Venezuelan opposition and is now considering a more assertive strategy? What's behind the Maduro government's resilience and strength and the Trump administration's failure to shatter its positions?

Gustavo Guerreiro: Twelve months after an attempted coup, Guaido shrank from both the supportive population and the Chavistas. Maduro remained firm where he always was, with popular and military support. No ruler, no matter how powerful, could resist the systematic attacks of violent domestic political opposition, major media outlets and US articulations, threats and sanctions, without popular backing. Popular forces loyal to the Bolivarian Revolution continue to express permanent support for Venezuelan President Nicolás Maduro. With that, the movement to depose him it lost momentum.

Trump has already realised that Guaido is increasingly weakened to articulate an imperialist agenda in Venezuela. Although Elliott Abrams of the US State Department reaffirms Washington's willingness to stick to Guaido's plans for "restoring democracy", we know that is rhetoric. US Homeland Security Advisor Robert O'Brien is already planning a new strategy.

The only possible explanation for the strength of the Maduro government is the expressive popular support gained by the legacy of Hugo Chavez, who was able to mobilise the Bolivarianism (historical anti-imperialist and anti-colonialist force) that marks Venezuelan society.

Sputnik: How will the situation unfold in your opinion? Will it give a boost to Venezuela's opposition or ultimately disrupt its attempts to oust Maduro? How is the US likely to respond? What measures Washington can take to crack down on Venezuela and what Latin American countries is the US is likely to "enlist" to step up pressure on Caracas?

Gustavo Guerreiro: The Organisation of American States (OAS) said it would debate on 10 January, a resolution that condemns the "use of force" in the Venezuelan Parliament by the government of Nicolas Maduro. Unsurprisingly, the entity and more than 50 countries recognise parliamentarian Guaido as head of state. I believe Washington will continue to use political tactics through wrongdoing and disruptive action, that is, operations in which the US acts directly or through local groups to provoke internal divisions, splits and conflicts, cause confusion or distraction with the intuition, and undermine the authority and legitimacy of a head of state.

It is difficult to predict any military action, even because effective military actions are never announced. As we have seen in many episodes, the US diplomatic, intelligence and defence services precede even the most untimely military action. A recent example was the assassination of Iranian General Qasem Soleimani, whose ambush was articulated between Riyadh and the Israeli intelligence service, deceiving Baghdad and Tehran.

There is no way to make predictions from this perspective. The Latin American scenario has become quite complex and, in the Venezuelan case, economic support from China and Russia has made a difference. In addition, Trump faces an exhausting impeachment process and a major geopolitical defeat in the Middle East.