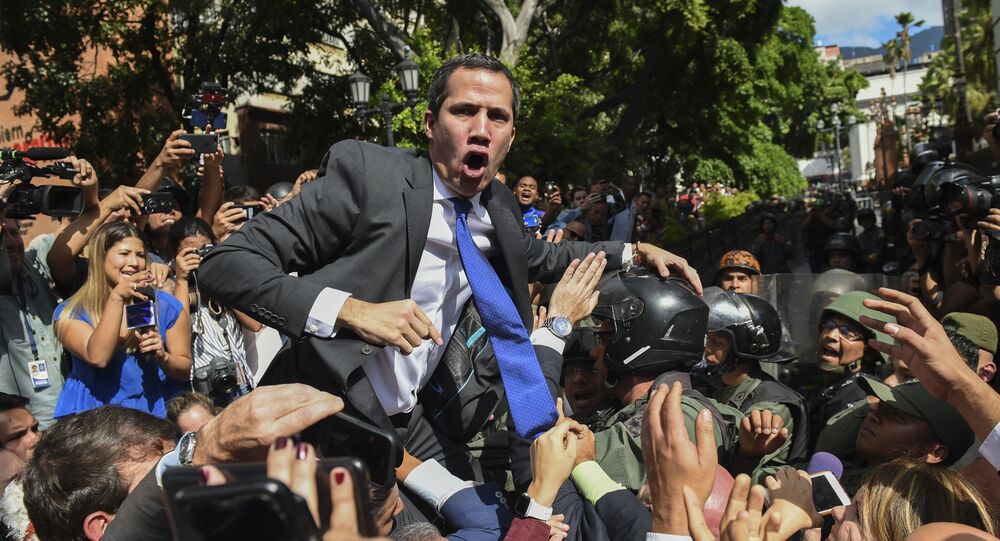 On January 23 of last year, 36-year old Juan Guaido, then-head of the opposition-led National Assembly, declared himself the interim president of Venezuela despite the fact Maduro won re-election the previous year.

The United States immediately backed the self-declared president and imposed crippling sanctions on Venezuela. Maduro, meanwhile, accused Guaido of being a US puppet who collaborated with Washington in an attempt to overthrow the Venezuelan government to control the country’s vast natural resources.

Only about 50 countries, all US allies, announced their support for Guaido. Russia, China, Turkey and several other countries came forward to support Maduro as the only legitimate democratically-elected leader of the country.

Guaido’s status among the opposition has taken a nosedive at the outset of 2020. On January 5, the Venezuelan parliament elected pro-Maduro lawmaker Luis Parra to replace Guaido as its speaker.

Telesur English and Znet analyst Joe Emersberger said that the Venezuelan opposition is so badly divided that it now has two supreme courts in exile, while some are even prepared to negotiate with Maduro.

Meanwhile, the president still remains more popular among large portions of the population, he said.

"I think the [Maduro] government would win any election especially outside Caracas," Emersberger said.

Moreover, Emersberger added, the opposition is losing popularity because it is closely identified with the United States, which is responsible for the sanctions which make life so difficult for most Venezuelans.

Despite the embarrassing failed coups, his Venezuela policy is unlikely to hurt Trump’s re-election chances, Emersberger acknowledged, because US Democrats are equally keen on regime change.

Kevin Zeese, co-director of Popular Resistance activist group, agreed that Maduro’s domestic political enemies were in decline. Zeese was part of a group of activists who occupied the Venezuelan embassy in the United States for weeks on behalf of the Maduro government to prevent Guaido’s people from taking over.

"He is recognized as a puppet of the United States and is ineffective. The United States embarrasses itself by being linked to Guaido and his shrinking political party," Zeese said. "The opposition is divided and weaker."

"I think the main issue facing Venezuela is the corruption accusations faced by Juan Guaido. This kind of rottenness in politics is typical of the pre-Chavez era between 1958 and 1998, and Guaido represents the political forces and classes who ran the country then," Derham said.

A majority of Venezuelans are still fearful of a return to those dark days and still remember the hope and dignity which President Hugo Chavez, Maduro’s predecessor and mentor, inspired.

"That is why the opposition does not want to rely on elections to test their popularity," Derham said.

On Monday, US Secretary of State Mike Pompeo reiterated his oft-repeated call to drive the twice-democratically-elected Maduro from office.

Zeese said that although Guaido had tried and failed to launch a coup at least five times over the past year, the US is unlikely to stop.

"The US has not given up. The economic war will continue and the US will try to escalate. A military attack seems unlikely as Colombia and Brazil, US allies who border Venezuela, do not want to be brought into a war with Venezuela," Zeese explained.

In addition, Zeese continued, Venezuela is prepared for war with the help of Russian air defense systems, 3 million civilian militia members, 200,000 regular troops as well as a national police force.

"The US would be defeated in a war with Venezuela, but it would be very destructive of the country and would spill over into neighboring countries," Zeese warned.

UN Independent Expert on the Promotion of a Democratic and Equitable International Order Alfred-Maurice de Zayas noted that Guaido is currently seeking support on a visit to this year’s World Economic Forum in Davos.

"Guaido is in Davos meeting people," he said. "Don't underestimate the power of big money."

International financial interests have not given up their hope of plundering the oil wealth and other resources of Venezuela once Maduro and his colleagues had been driven from power, de Zayas cautioned.

"If they topple Maduro, it will be a bonanza for US investors and speculators," de Zayas concluded.