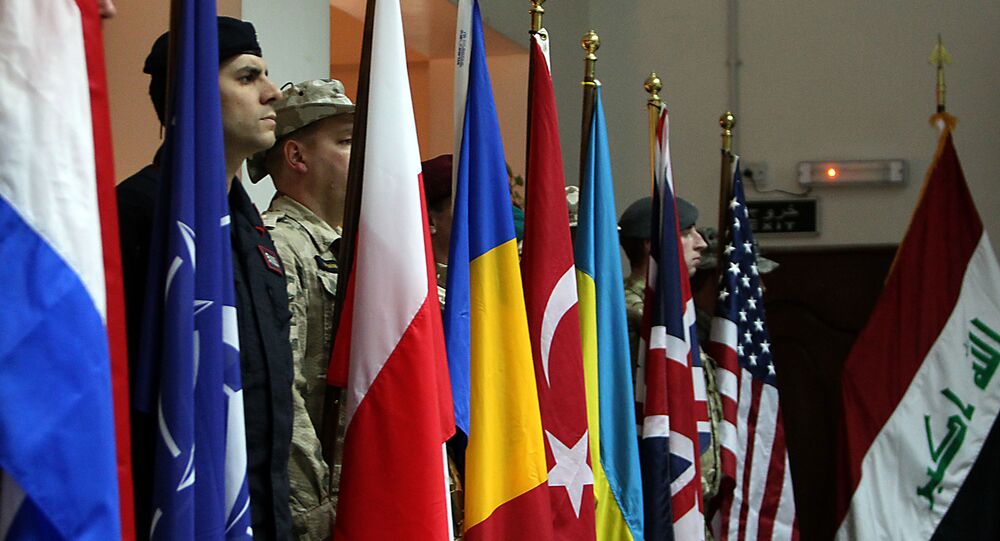 On 8 January, Donald Trump announced that he would ask NATO to increase its involvement in "the Middle East process" during his address to the nation. International observers have weighed up whether Trump's "NATO-ME" initiative is what the region and the bloc really need.

Donald Trump's statement with regard to expanding NATO's role in the Middle East came on the heels of the Iranian retaliatory ballistic missile strike on Iraqi military bases housing US troops in the aftermath of the extraterritorial targeted assassination of Quds Force commander Qasem Soleimani by the US.

"I actually had a name. NATO, right, and then you have ME, Middle East. They would call it NATO-ME", the American president told reporters on Thursday, commenting on his decision.

Previously, Trump has repeatedly criticised NATO members over the "unequal" burden sharing within the alliance. At the same time, he has been largely at odds with the bloc's European allies-signatories to the 2015 Joint Comprehensive Plan of Action (JCPOA), also known as the Iran nuclear deal, since he unilaterally tore the accord apart.

However, Dr Ilter Turan, professor emeritus of political science at the Department of International Relations at Istanbul Bilgi University, is not sure that Trump's words "should be taken up as a serious proposal".

"The US has been conducting a number of policies on its own in the Middle East, like its continued presence in Iraq and operations in Syria", Dr Turan notes. "Mr Trump finds it frustrating that other allies in NATO do not necessarily take part in actions initiated by the US. Therefore Mr Trump is unhappy that NATO is not mobilised and he fears that maybe the US is doing too much, although what US is doing is not necessarily a NATO affair".

According to the professor, "there seems to be no particular NATO-ME need". On the other hand, if the US is seeking to expand the bloc by adding new member states in the Middle East, there could be certain difficulties to reach consensus within the alliance, given the instability engulfing the region.

"There are some countries that are sort of close allies to the US like Egypt, obviously Israel, maybe Saudi Arabia and UAE", the Turkish academic says. "The US has an interest in protecting [the] security of these countries. I don’t think anyone [else] will have an interest in expanding and incorporating these countries into NATO. It is already a large organisation and as the numbers go bigger it becomes more and more difficult and as the threat for which NATO is established is no longer easy to identify".

'NATO is Already in the Middle East'

Rick Rozoff, a journalist and manager of the Stop NATO website, does not see any need for "NATO-ME", either: according to the journalist, the military bloc already has a significant presence in the region.

"NATO is already in the Middle East and has been there since the late 1990s", he recalls. "Starting with the Mediterranean Dialogue (Algeria, Egypt, Israel, Jordan, Mauritania, Morocco and Tunisia) and the Istanbul Cooperation Initiative (Bahrain, Kuwait, Qatar and UAE, with Oman and Saudi Arabia in the wings), NATO controls the entire Mediterranean Basin and almost all the Middle East and North Africa".

According to Rozoff, the only members of the 22-member Arab League that are not NATO partners in some manner are Lebanon and Syria.

"Iraq is a member of NATO's Partners Across the Globe and Libya has been identified as a partnership prospect since the end of NATO's six-month war against it in 2011", the journalist highlights. "NATO has airlifted African Union troops to Somalia; pays regular naval visits in Puntland. The Palestinian Authority for years has invited NATO to intervene in the West Bank and Jordan".

Meanwhile, judging from the alliance's website, the creation of "NATO-ME" is not on the agenda yet. Speaking ahead of the Extraordinary Meeting of the European Union Foreign Affairs Council on 10 January, Secretary General Jens Stoltenberg called upon EU member states to further de-escalate tensions over Iran, continue to fight Daesh (ISIS/ISIL)*, and emphasised the need to "restart training" in Iraq, previously suspended "for security reasons".

Commenting on his phone talk with Donald Trump about stepping up NATO's involvement in the region, Stoltenberg highlighted that the bloc is already involved in a number of initiatives, stressing that "this is not decisions NATO can just make alone": "This is not only about what NATO wants to do, but also what countries in the region want us to do together with them", the NATO chief underscored.

UK Foreign Minister Says NATO is ‘More Important Than Ever’