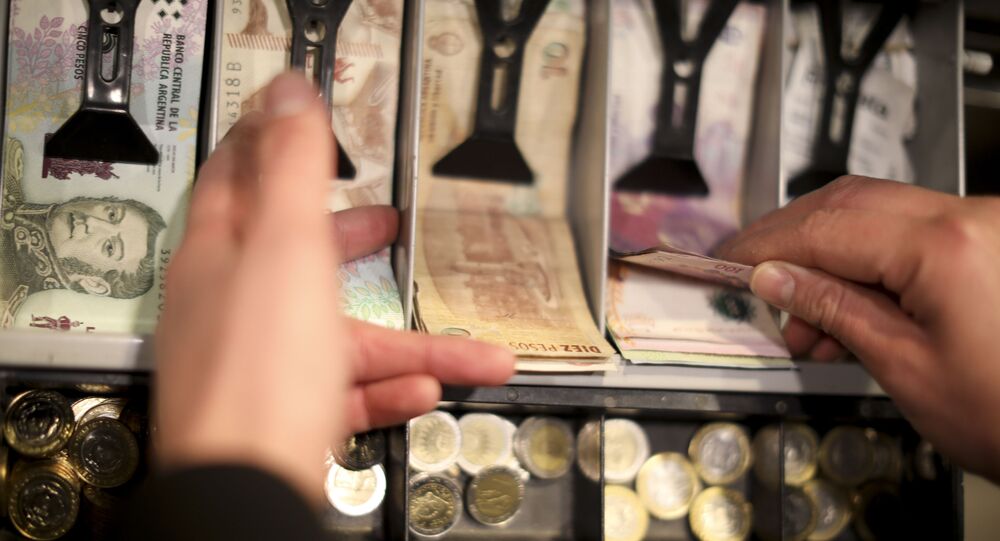 On 10 December, Alberto Fernandez was sworn in as the new president of Argentina. Gonzalo Fiore Viani, a lawyer and political analyst, outlines the major economic and foreign policy challenges faced by the new "Peronist" government.

Argentine Peronist leader Alberto Fernandez, who won the October presidential elections with 47.9% of the vote, unveiled his new cabinet on 6 December announcing that Martin Guzman, a 37-year old protege of prominent US economist and Nobel laureate Joseph Stiglitz, will become the country's next economy minister. Guzman will have to deal with Argentina's galloping inflation, rising unemployment and a $100 billion debt.

How Fernandez Gov't Will Deal With Argentine Economic Crisis

Last year the dire economic situation prompted Fernandez' predecessor, Mauricio Macri, to request a $56-billion IMF loan. As of yet, about $45 billion has been disbursed to the recession-hit country. While the loan fell short of breathing new life into Argentina's economy, this year the country has to start repaying its debts. There are fears that Buenos Aires is teetering on the verge of a new sovereign default.

Guzman, a vocal critic of the IMF's policies, is expected to hold talks with creditors to restructure Buenos Aires' financial obligations.

"By 2020, Argentina has to face the fulfilment of obligations for almost $55 billion dollars", says Gonzalo Fiore Viani, a lawyer and political analyst from Cordoba, Argentina. "Therefore the payment of capital and interest commitments must necessarily be suspended for a while. Martin Guzman, the new minister of economy, is a specialist in sovereign debt, so he can manage the central problem of the Argentine economy, taking into account the proposed suspension of payments, both due and due for two years."

Viani says that Argentina today has a liquidity and solvency problem, that is, shortages of pesos and dollars to face the payment of the debt amid the economic slowdown.

"Currently, inherited debt represents 90 percent of the gross domestic product (GDP), in addition to a financial deficit that implies 5 percent of GDP," he says.

Yet another issue the Fernandez government is going to deal with is poverty. According to the Catholic University of Argentina, about 40 percent of Argentines are considered poor. "The social situation is so serious that the government must act first in that regard", the political analyst underscores referring to Fernandez' idea of "ethics solidarity" to end poverty and misery in the country.

To solve these issues, Guzman is seeking to revive the country's economic growth and boost production in the export sector. He argues against pouring the IMF's money to service Argentina’s bonds and implementing the organisation's austerity scheme. According to him, the IMF programme does not work while the deepening of austerity policies is only leading to greater recession.

According to Viani, Peronism, a political doctrine based on legacy of former President Juan Peron and sometimes described as "right-wing socialism," is making a comeback in Argentina.

"Peronism returns with a heterogeneous coalition of government, with all its internal lines represented, I think it is a return to what was the first government of Nestor Kirchner. And Alberto Fernandez can become the new Kirchner, or even the new Raul Alfonsin," the political analyst believes.

One Should Expect New Shift in Argentina's Foreign Policy

Apart from upcoming changes in domestic policy, Viani also expects a shift in Argentina's foreign strategy under Fernandez: "I think the international politics of the new government will be totally opposite to the one that Macri had," he says. "Relations with Russia, almost inexistent during the Macri administration, will be now stronger".

He highlights that "the election of Felipe Sola, a man with no diplomatic background but a very skilled politician, as foreign minister, has to do with the importance of international relations in a very complex world."

Meanwhile, the centre-left takeover in Argentina has seemingly chilled relations between Buenos Aires and Brasilia with Jair Bolsonaro not attending Fernandez' inauguration and then sending his vice president to the ceremony. Viani suggests that right-wing politician Bolsonaro's move was driven by "ideological reasons."

"But besides that, Bolsonaro wants to have a major role in the region, becoming the indisputable leader of Latin America, but that is impossible having a progressive government in Argentina," the political analyst remarks.

Why Buenos Aires Needs Working Relations With Both China & US

Viani foresees that Buenos Aires will further strengthen economic cooperation with Beijing. The two countries have maintained close ties for quite a while despite political changes in Argentina.

Under Macri, the People's Republic of China provided loans to Argentina and extended bilateral currency swap collaboration launched in 2009 by then President Cristina Fernandez de Kirchner. Additionally, the country's telecom sector is continuing cooperations with China's tech giant Huawei, that has recently found itself in the cross hairs of the Trump administration.

Washington is obviously displeased with China's growing influence in the region which the US has for many decades considered its backyard. In October 2018 US Secretary of State Michael Pompeo warned Latin American states: "When China comes calling it’s not always to the good of your citizens", while commenting on the Beijing-led Belt and Road Initiative (BRI).

Assessing the prospects of Argentine-American ties, the analyst opines that while "Fernandez and Trump's relationship seemed to have started off with the right foot but quickly tensed due to cross-statements about the coup in Bolivia".

To add to the controversy, on 2 December, Trump tweeted that he was going to restore steel and aluminium tariffs on Argentina and Brazil.

"With regard to Argentina, the rise in tariffs worries because it can serve as an advance for a tightening in US trade policy and in the renegotiation of the debt with the IMF", the political analyst says. "In addition one of the big problems that the next government will face is the lack of dollars".

According to Viani, while pursuing independent foreign and domestic policy Buenos Aires still needs to maintain working relations with Washington to solve the external debt problem.

"I believe that with a pragmatic policy, the new government can have good relations with the United States but also to maintain sovereign external policy to contribute to the development of the country," he says.

‘Trump Tariffs Can Unite Brazil and Argentina Regardless Of Differences’ – Expert