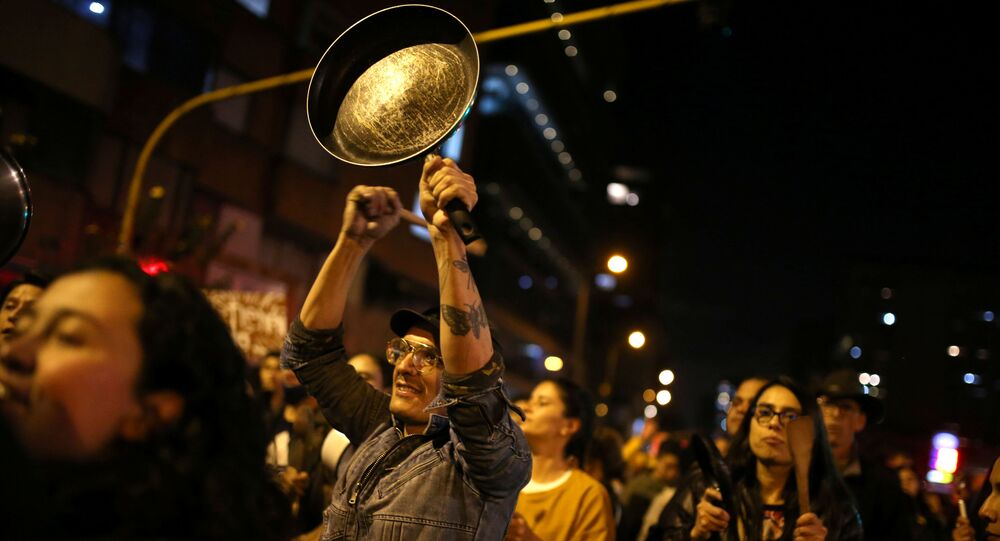 Nation-wide protests continue in Colombia despite President Ivan Duque's announcement of a "National Conversation" aimed at calming the unrest on 24 November. Gonzalo Fiore Viani, a lawyer and political analyst, outlines the driving factors of the Colombian turmoil.

On 2 December, Duque agreed to negotiate an end to the anti-government protests with the strike leaders in parallel with a National Conversation that was denounced by the Colombian National Strike Committee last Thursday for not being truly "inclusive".

Earlier, the committee, which comprises unions, students, university lecturers and indigenous groups, published a list of 13 demands which includes the suspension of neo-liberal economic reforms, the dissolution of Mobile Anti-Disturbance Squadron (ESMAD) after the death of 18-year old protester Dilan Cruz, and the implementation of the 2016 peace agreement with the Revolutionary Armed Forces of Colombia (FARC).

According to Gonzalo Fiore Viani, a lawyer and political analyst from Cordoba, Argentina, it was clear from the very beginning that Duque’s initiative would not help to calm down the situation, since the problem is much broader it appears at first glance.

"Look at what happened in Chile, Pinera launched a series of government initiatives to try to bring an answer to the protesters but it didn’t help at all," Viani stresses.

Shedding light on the complex nature of the Colombian unrest, the political analyst highlights "the indigenous factor".

"According to the 2018 census, 1,907,617 people in the country belong to native communities, that is, 4.4 percent of Colombians," he notes. "According to the data managed by social organisations, every 72 hours an indigenous man is killed at the hands of the paramilitaries. The highest percentage of them is in the northern region of Cauca. According to the Regional Indigenous Council of Cauca (CRIC), 22 indigenous people were killed there during 2018. While so far in 2019, the victims from those communities amount to 56."

On 29 November, representatives of the CRIC, an organisation based in the south-western Cauca department, joined demonstrators in Bogota, to protest against the killing of indigenous people by illegal armed groups and drug traffickers.

FARC is yet another important factor in the Colombian protest movement which has to do with the 2016 agreement and the country's much-discussed land reform.

"Colombia is the Latin American country with the highest level of land concentration despite having the third-largest number of agricultural workers, after Mexico and Brazil," Viani explains. "One percent of the largest farms in the country occupy 81 percent of the land while the remaining 19 percent is distributed among 99 percent of the farms. According to a study by Oxfam Colombia in 2018, one million peasant households occupy the same place that would correspond to a cow to graze."

To complicate matters further, the land has become concentrated even more over the decades, he points out: "In 1960 only 29 percent of the country had farms of more than 500 hectares, but in 2002 the figure was already 46 percent and in 2017 it quickly rose to 66 percent."

FARC, a Marxist guerrilla organisation, started its insurgency in the 1960s under the slogan of agrarian reform, seeking to redistribute lands to small peasants and ban large landholdings. The 23 June 2016 peace agreement inked between FARC and the Colombian government of President Juan Manuel Santos in Havana was supposed to deal with the agrarian inequality among other issues, envisaging the creation of Fondo de Tierras (a land fund) to distribute land to landless people or poor peasants, the protection of rights of small and middle-sized farmers, and government investments into rural communities.

However, the much-anticipated rural reform is still facing a lot of bumps in the road to its implementation, including resistance from large land owners, "anti-restitution" paramilitaries as well as an apparent lack of commitment from Colombia's right-wing government, although the country's Congress had passed a series of initiatives to deal with the land problem.

For his part, Ivan Duque, who has been at the helm since 7 August 2018, has repeatedly called for reconsidering the peace agreement with the Marxist group, which prompted the protesters to include the full implementation of the Bogota-FARC peace provisions to their demands.

In addition, the National Strike Committee is now also demanding that Duque kick off negotiations with the National Liberation Army (ELN), the country's remaining guerrilla organisation.

Social Inequality is a Major Problem in Chile, Ecuador & Colombia

Assessing the ongoing turmoil in Latin America, Viani underscores that "the greatest interrelation between the conflicts in Chile, Ecuador and Colombia are the major inequalities that the people in those countries suffer".

"Especially in Chile and Colombia, which were the neo-liberal right-wing examples of countries that 'work well'," he notes. "During the demonstrations that artificial construction fell of and the inequalities of the systems were exposed."

The political analyst points out that "at the beginning of the year it seemed that only Venezuela, Nicaragua or Haiti would be the focus of serious social conflicts", however, "massive demonstrations took place over the months in Puerto Rico, Honduras, Peru, Chile, Colombia and Bolivia".

"One of the main characteristics of the protests, as in the rest of the world, is that there is no clear leadership, but rather a wide range of claims and especially, a great frustration of the people towards the traditional ruling class. Today the organisation, due to social networks and the immediacy of information, is much simpler", he opines.

The Colombian protests erupted on 21 November over rumours that the government was going to raise the pension age and cut the minimum wage. The demonstrations were accompanied by violent clashes with the riot police which led to overnight curfews in Cali and Bogota. According to some estimates, at least four people have died, 533 were injured and 172 detained. The turmoil has become one of the largest since 1977 labour riots in which at least 13 were killed, over 100 wounded and thousands arrested.