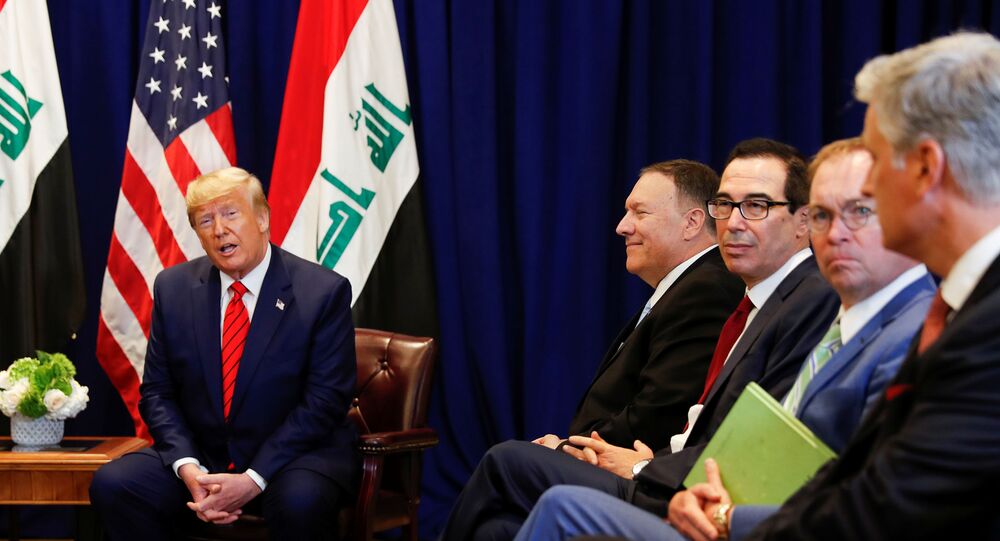 From Congress to the Cabinet, US President Donald Trump’s laundry list of alleged scandals are putting party loyalty and logic to the test. Despite a seemingly chaotic media showing from Trump critics and allies alike, it’s unclear whether these recent developments are enough to move the needle and actually produce a presidential impeachment.

Award-winning journalist and editorial cartoonist Ted Rall joined Loud and Clear on Monday to discuss the consistent media fumbles from the Trump administration and the breakdown in support amongst Republicans.

“It’s really crazy how if these guys just learned to keep message discipline and shut up and keep on point, they probably wouldn’t be in nearly as much trouble, but here we are,” Rall told hosts Brian Becker and John Kiriakou.

He also suggested the Trump administration, along with lawyer Rudy Giuliani, hire a media trainer, lest the president’s “predilection for loud-mouthed blatherers” be his undoing.

Acting White House Chief of Staff Mick Mulvaney and US Secretary of State Mike Pomepo have been on an unsuccessful tour of damage control after the former lost his cool and told members of the press to “get over it” in response to his own admission of a quid pro quo taking place in regard to military aid from the US to Ukraine.

Most recently, Mulvaney appeared on “Fox News Sunday” with journalist Chris Wallace and attempted to make a seemingly Orwellian case for why everything everyone heard was not as it seemed.

Wallace, however, pushed back against the Trump administration official’s claim that the media misconstrued his words and argued that “anyone listening to what you said in that briefing room can come to one conclusion.”

"You said what you said!" - absolutely BRUTAL grilling of Mulvaney by Chris Wallace on quid pro quo. pic.twitter.com/eqHkRZlbM5

Check out the LONG pause from SecState Mike Pompeo after George Stephanopoulos calls him out for stiffly refusing to discuss Mick Mulvaney's devastating admission of a quid pro quo this week.

Outside of the Trump administration, it may have come as little surprise to some that recently vocal Trump critic Sen. Mitt Romney (R-UT) confessed to running a burner Twitter account - by the name of “Pierre Delecto” (@qaws9876) - to voice his apparently secret opinions about the president.

Sen. Lindsey Graham (R-SC), on the other hand, definitely surprised many Americans by saying Trump created a “s**tshow” by abandoning the US’ Kurdish allies in Syria.

Lindsey Graham on Sunday Night: "Syria is a shit show."

Flip-flopping in under 12 hours is a real achievement, @LindseyGrahamSC. pic.twitter.com/3oUprTL9Jq

Graham, in an interview with Axios’ Jonathan Swan, said he could be swayed toward impeaching the president “if you could show me that, you know, Trump actually was engaging in a quid pro quo, outside the phone call, that would be very disturbing.”

However, things changed once again come Monday. As of October 21, Graham now believes “Trump is thinking outside the box” and “securing” Syrian oil fields from Syrian President Bashar al-Assad and the Iranians in order to guarantee Syrian citizens receive their natural resources’ revenue.

Despite the sweating and backpedaling of Trump administration officials and the American people’s negative feelings concerning political leadership, Rall noted he believes a lot of what is being pushed to the forefront by US media is simply “wishful thinking” by “pro-impeachment forces.”

“My money is very much against removal in the Senate,” he added, speaking on a potential impeachment vote further along in the process.