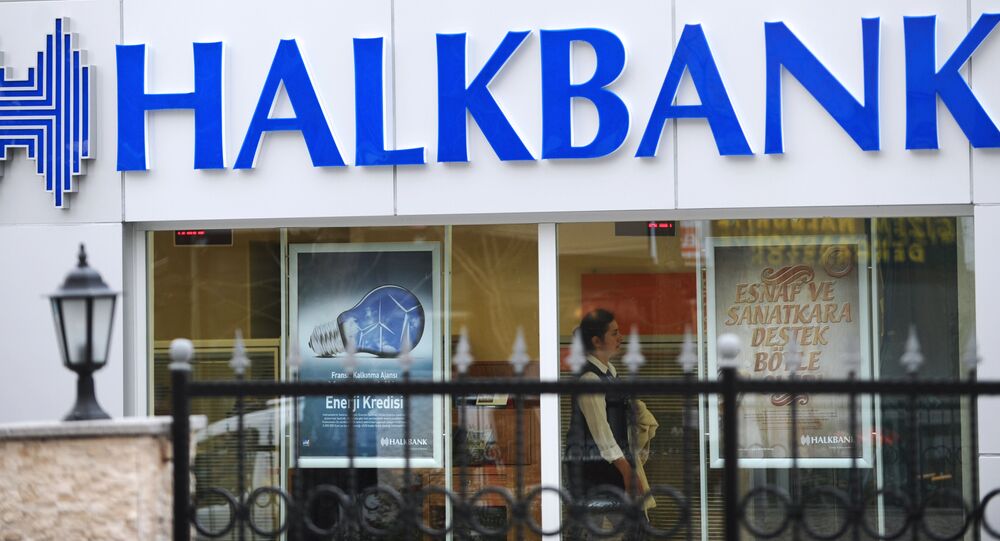 The US Attorney for the Southern District of New York Geoffrey S. Berman has filed fraud and money laundering charges against Turkey's Halkbank amid the escalating row between Ankara and Washington. Scholars have warned that if the charges lead to sanctions against Turkey's banking system it will hit Turkey's currency and economy hard.

On 15 October, Halkbank, a large Turkish state-owned financial institution, was charged by the Manhattan Federal Court over its alleged participation in a "multibillion-dollar Iranian sanctions evasion scheme."

"As alleged in today’s indictment, Halkbank’s systemic participation in the illicit movement of billions of dollars’ worth of Iranian oil revenue was designed and executed by senior bank officials", US Attorney Geoffrey S. Berman said Tuesday, adding that the bank's conduct was "supported and protected by high-ranking Turkish government officials."

The Turkish state-owned bank was charged with:

The bank's leadership called the indictment an "unprecedented legal overreach" while Turkish President Recep Tayyip Erdogan denounced the US court's decision as "ugly".

Last year the same court held a trial against Mehmet Hakan Atilla, the bank's deputy chief executive officer who was found guilty and sentenced to 32 months in prison in May 2018 over conspiring with Turkish-Iranian gold trader Reza Zarrab to circumvent the US Iran sanctions regime. Previously, Zarrab pleaded guilty of fraud, conspiracy and money laundering and testified against Atilla.

The litigation against Halkbank's deputy CEO dramatically exacerbated US-Turkish relations and was condemned by Erdogan as a political attack on Ankara.

The 15 October indictment coincided with the imposition of sanctions on the Turkish defence and energy ministries and senior government officials as well as tariff hikes over the unilateral military offensive launched by Ankara on 8 October against northeastern Syria regions held by the Kurdish-dominated Syrian Democratic Forces (SDF). The US-backed Kurdish People's Protection Units (YPG) is seen by Ankara as an affiliate of the Kurdistan Workers' Party (PKK) banned in Turkey as a terrorist organisation.

Professor Nader Habibi, who works at the Crown Center for Middle East Studies at Brandeis University, says that the timing of the indictment is no coincidence. According to him, it is yet another effort by the Trump administration to force the Turks to end their military operation in northern Syria.

"Since Halkbank is a public-owned government bank, the Turkish government is likely to see the timing as politically motivated," he says. "This week the US government initiated a number of limited sanctions against Turkey which included a doubling of tariffs on imports of Turkish steel."

The newly proposed US sanctions were called "unacceptable" by Ankara. "The US cannot stick to unilateralism. Our stance against that is quite evident," Turkish Foreign Minister Mevlut Cavusoglu stated Wednesday.

According to Habibi, sanctions which have been introduced so far were "relatively mild", however, "if the charges against Halkbank lead to the introduction of financial sanctions against the Turkish banking system the impact on Turkish economy can be severe."

Kemal Kizilca, an associate professor of economics at Ankara University, echoes Habibi's concerns: "Any possible actions from the US courts might result in further weakening of the Turkish currency and, consequently, public discontent," he says.

'Ankara Doesn't Consider US Sanctions on Iran as Legitimate'

The academics recall that the Turkish government has long sought ways to circumvent US sanctions to Iran in order to keep Turkey’s energy trade with the Islamic Republic running.

Due to the US and EU sanctions regime, Turkey has been unable to make payments to Iran through the Society for Worldwide Interbank Financial Telecommunication (SWIFT). To solve that problem, Reza Zerrab arranged a payment system that consisted of "buying gold from international markets using money deposited in Halkbank, and the transfer of that gold to the Iranian government," Kizilca explains.

Habibi recalls that Halkbank officials have helped Iran get funding "by claiming that they were used to buy medicine and food, which were exempt from the US sanctions on humanitarian grounds."

"The US Justice Department considers this a violation of US sanctions because it has enabled Iran to sell more than $20 billion worth of oil and gas to Turkey and transfer its proceeds back to Iran," Habibi elaborates. "The charges follow the prosecution of Iranian businessman Reza Zarrab who has confessed to an active role in converting these funds into gold for transfer to Iran with the assistance of several high ranking Halkbank officials."

Still, Kizilca highlights that after his release in July 2019, former Halkbank CEO Atilla received a warm welcome from the Turkish government and was further promoted as the ambassador of Turkey to the Organisation for Economic Co-operation and Development (OECD).

According to the scholar, Erdogan's gesture towards Atilla apparently meant that Ankara "does not consider the US’ sanctions on Iran as legitimate" since it "backs the officials who were allegedly involved in the evasion of those sanctions."