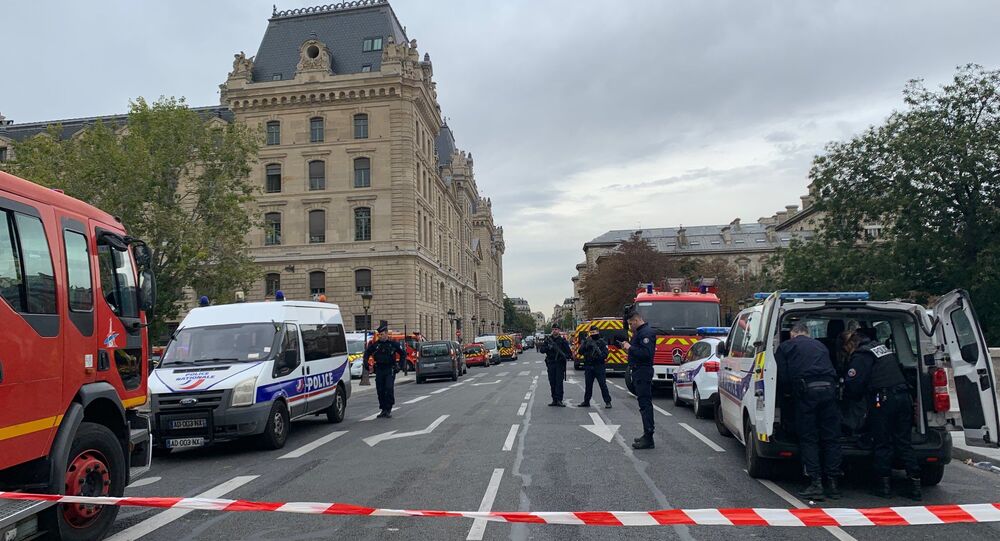 The Paris stabbing attack at the police headquarters was cited by French Interior Minister Christophe Castaner as a sign of a "state malfunction." British terrorism experts Peter Williams and David Lowe have discussed the reasons behind radicalisation and terrorism in Europe.

According to a counter-terrorism memo, the assailant converted to Islam several years ago and showed signs of radicalisation which included his endorsement of the deadly attack on satirical magazine Charlie Hebdo in 2015 and refusal to interact with women. In addition, the stabber allegedly had links with a hate preacher in Val-d'Oise.

Speaking to France's TF1 Television on Sunday French Interior Minister Christophe Castaner admitted that there had been certain "failings" which led to the death of four police employees last Thursday. According to him, there had been clear "warning signals" which were overlooked.

To add to the controversy the IT specialist, who had worked at the Directorate of Intelligence of the Prefecture of Police, or DRPP, since 2003, had full security clearance and access to classified information.

According to Le Parisien, the police found a USB-drive containing personal data of several dozen employees of the police headquarters and several propaganda videos of the Daesh (ISIS/ISIL)* terrorist group. The French newspaper raised the question as to whether the stabber shared the sensitive data with other people.

According to Peter Williams, a policing and terrorism expert at Liverpool John Moores University, "the ideology of both al-Qaeda* and ISIS* still exists" and "there are plenty of motivated individuals out there" regardless of the terrorist organisation's defeat in Syria and Iraq.

Williams expresses concerns about the withdrawal of US troops from Syria, announced by President Donald Trump on Monday and confirmed by his Turkish counterpart Recep Tayyip Erdogan.

"Now, the worry is - for me, which I see as being a potential watershed event - is the Americans removing the troops from Syria and Iraq," Williams says.

Citing the recent interview with General David Petraeus, Williams says that the situation in Syria evokes strong memories of the US partial withdrawal from Afghanistan which drag the country into the hands of the Taliban.

"We know what happened then", Williams notes. "We basically pulled out of Iraq because of what the Americans by and large had done in Iraq and in relation to how in the immediate post-invasion policy that sort of laid the foundations for the creation of ISIS".

In his Tuesday interview with BBC Radio 4's Today programme Petraeus warned that "tens of thousands" of Daesh fighters in Syria are "very likely trying to establish an insurgent movement as well as to still carry out terrorist attacks".

The terrorism expert highlights that according to some estimates, there are up to 10,000 Daesh fighters in the Syrian-Iraq area which "is pretty significant."

According to him, the Middle Eastern terror crisis – triggered by the eight-year long Syrian civil war – has repeatedly spilled over to Europe. To illustrate his point he refers to the terror attacks in London and Manchester in 2017.

France has also been subjected to terrorist attacks on multiple occasions, including the 7 January 2015 Charlie Hebdo massacre conducted by two brothers, Said and Chérif Kouachi, associated with al-Qaeda in the Arabian Peninsula*; and a series of coordinated terror attacks in November 2015 in Paris and the city's northern suburb, Saint-Denis.

In June 2016, Larossi Abballa, an individual with known ties to a jihadi group in Pakistan killed a police officer and his partner at their home. Yet another assailant known to anti-terror investigators murdered a police officer and injured two others in Paris in April 2017. Both attacks were claimed by the Daesh* terrorist organisation.

It's Important to Prevent People From Getting Involved in Terror Activity

For his part, Dr David Lowe, senior research fellow at Leeds Beckett University, warned against leaping to conclusions: "We have to make sure we differentiate between is this a terrorist attack, or is this just a criminal attack, is this someone who is committing a robbery, or is this a disgruntled employee," he remarks.

"You know we have to differentiate and not jump to conclusions straightaway", Lowe emphasises. "But I think what we have to be sure of in Europe - not the whole of Europe is when we're not complacent is - complacency is the worst thing that can set in - we haven't had any sort of major attacks in the last 12 months as such. That's when our guard can drop and I think we voiced about everybody who's going to be constantly vigilant. I make sure we assist the police."

It was reported that Harpon, who was born in ex-French colony Martinique, was deaf and communicated through sign language. Some media outlets presume that the stabber was frustrated professionally by his lack of career progression. They further suggest that he had been asking for a sign language interpreter for months to express his desire for a promotion.

Commenting on the ways to tackle the terror problem Lowe suggests that "obviously security is tight": "There’s obviously still great cooperation going on between the agencies within Europe, passing intelligence", he notes. "So I don't think there's much more we could do on that side".

What's more important, according to the researcher, is to pursue a "prevent strategy" and help "those who are vulnerable to being drawn towards terrorist activity." To that end a series of measures needs to be taken, he believes.

"Recently the UK Home Secretary, with the US and Australia, Mark Zuckerberg of WhatsApp - because it's deeply encrypted access - in case of terrorism, child sexual exploitation, organised crime - and we've got to be realistic this is now where we have to be starting to properly try and assist people try and prevent people from getting involved in the first place. On top of that as I say we've just got to carry on being vigilant and not take things for granted because that's what the moment when something could happen," he concludes.

*Daesh (ISIS/ISIL/Islamic State), al-Qaeda are terrorist groups banned in Russia and many other countries.