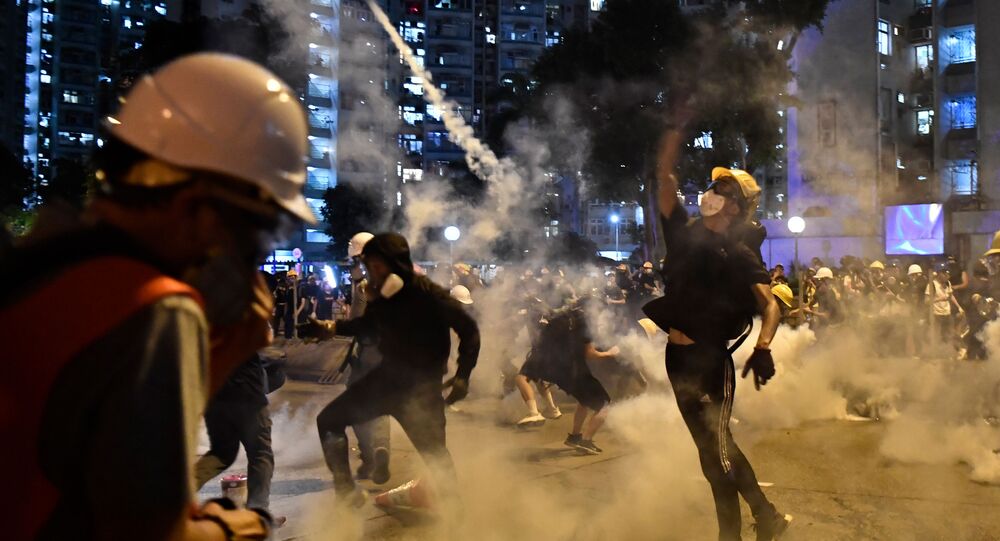 Protests in Hong Kong have continued to escalate, despite their primary cause - an extradition treaty bill with mainland China - already having died. However, the protests have deep Western backing, which aims to provoke the Chinese army into another “Tienanmen Square-type” incident, giving the West a major PR victory.

Anti-Chinese protesters in Hong Kong have legitimate grievances, an activist told Sputnik, but decades of US State Department propaganda have caused them to rally around the actual sources of their complaints and be hostile to Beijing, from which many of their solutions could come.

In the latest escalation of demonstrations, anti-Beijing protesters stormed the Hong Kong International Airport on Monday, with thousands of demonstrators filling up the terminal, clogging travelers up so much that the airport cancelled all flights in and out of the city until the protesters vacated the facility.

Beijing’s Hong Kong and Macao Affairs Office denounced the incident, noting the protest movement was “beginning to show the sprouts of terrorism” and constituted an “existential threat” to the population. Chinese leaders have repeatedly warned Washington not to get further involved in the crisis and to cease its present meddling.

​Hong Kong and Macao are Special Administrative Regions of China (SARs), exercising a broad level of autonomy from Beijing as part of their terms of reincorporation into the People’s Republic. Both cities were seized by Western powers - Macao by the Portuguese in 1557 and Hong Kong by the British in 1841 -  and returned to Beijing in the closing years of the 20th century. The cities functioned as financial outposts of their respective empires, and Hong Kong in particular has retained a deep level of identity separate from mainland China.

However, British rule was highly undemocratic: a governor appointed by the British crown ruled over the territory without a hint of representative government until the final years of British rule.

Mike Wong, outreach coordinator of the San Francisco chapter of anti-war group Veterans for Peace, told Radio Sputnik’s Loud and Clear Monday that many of the protesters in the streets today are too young to remember that era, and have been force-fed an anamorphic image of the West, the United States and British colonial rule that is driving them to revolt against Beijing.

Wong noted that public opinion is about evenly divided for and against the protesters, and that huge demonstrations in support of the SAR government and the Hong Kong police had been totally ignored in mainstream Western news. These anti-protester protesters have fought with the demonstrators and been attacked by them, and have made a point of wearing white in contrast to the protesters’ black de facto uniforms.

He noted the “dark hand” of the West in helping to buttress support for the demonstrations had been clearly documented.

MintPress News reported as early as June 13 on the heavy involvement of the National Endowment for Democracy (NED) in supporting the protests. The NED backed the Solidarity Center and National Democratic Institute, two Hong Kong-based NGOs hostile to Beijing, as well as the Hong Kong Human Rights Monitor (HKHRM), supplying the three groups with several million dollars in recent years. All three groups are members of the Civil Human Rights Front coalition, commonly cited by Hong Kong media organs such as the South China Morning Post and Hong Kong Free Press as the organizers of the demonstrations.

What do you know? The truth about NED funding goes deeper than the tip of the iceberg I chipped off with a few hours of research. NED pumped $13mil into HKCTU, which was started to serve as an anti-communist alternative to the local union https://t.co/cv6HoO0uJ2

​“For the CIA’s hand to be openly involved in formatting dissent within other nations doesn’t look good, so they started this private non-profit, which is mostly funded by the US government, to do the same work that during the Cold War had been done by the CIA,” Wong explained. “So they’ve been doing decades of work teaching and propagandizing a hardcore group of youth with this idyllic idea of the United States and democracy, etc etc.”

Reagan administration official Michael Pillsbury: "We're partially involved... We also have funded millions of dollars in programs through the National Endowment for Democracy to help democracy in Hong Kong" pic.twitter.com/vjoNvn2bRO

​“Another factor is that the 1% in Hong Kong have been enriching themselves at the expense of the 99% in a way very similar to the United States, so that people at the top have gotten richer, people at the bottom have gotten poorer. And just as in the United States, there’s a great deal of frustration among the youth about that. There’s a lot of anger about that, and that kind of underlies everything else that’s going on.”

“That’s why you see a lot of older people who remember what it was like under the British and remember that they did not have democracy under the British and who understand what colonialism was and how it’s morphed into new forms in the 21st century. They tend to be more pro-government,” Wong told hosts Brian Becker and John Kiriakou.

“The youth, some of whom were born after the handover, don’t remember all of that,” he noted, “and so they are more vulnerable to American influence and propaganda and that sort of thing.”

“Essentially, this is colonialism which has morphed into new forms,” Wong noted. “Instead of naked imperialism, they cloak it under the name of ‘democracy.’ But again, there was no democracy under the British, and if you look at the kind of regimes that the United States has instituted when they’ve overthrown foreign governments, they’re mostly right-wing dictatorships that are very corrupt and are collaborators with the American war machine.”

“So, the demonstrators in Hong Kong, I think, don’t see the bigger picture, they don’t know what America’s really like, and they are being taken for a ride. But their underlying frustrations are real. They’ve been exploited, just like the 99% in America have been exploited … there is a basis for their anger. So they have some real frustrations, but those frustrations are the result of the Hong Kong capitalist system, which is similar to the British or the American capitalist system, so you see the same dynamics playing out in terms of the 99 versus the 1%.”

“The protesters actually support that,” Wong said about US support for the movement, noting that protesters wave American flags alongside British colonial-era and independent Hong Kong flags.

“The protests have escalated. There’s now a hardcore group of youth doing things like, they’re throwing bricks at the police; they’re laying siege to police stations; there’s video of a police station with all of its windows knocked out by bricks being thrown through them. They attempted to set fire to one of the police stations; they’ve been … physically attacking the homes of the families of policemen. There’s been video of the protesters harassing an old man at the airport,” Wong noted.

​Wong told Sputnik the ultimate goal of the protest backers was to draw the People’s Liberation Army into a direct confrontation with protesters and create a “Tiananmen Square-type” incident similar to the showdown between soldiers and anti-communist protesters in central Beijing in 1989, which the Western press later spun into a repression of a burgeoning peaceful democratic movement instead of the violent uprising that it was.

“Hong Kong police have shown great restraint - much greater restraint under the circumstances than American police would,” he said. “I think the protesters have been escalating the violence to try to provoke a harsh crackdown, because, of course, that would be a propaganda victory for the West.”

“No matter what level of force the People’s Liberation Army were to use, even if it were a very low level of force, it would be drummed up in the West as some kind of Tiananmen Square type of crackdown. The word ‘massacre’ would be thrown around even if nobody was killed. And it would also push Taiwan further away from China. So this is a strategy, a geopolitical strategy.”

Hong Kong Airport Cancels All Flights as Protests Cause Disruption