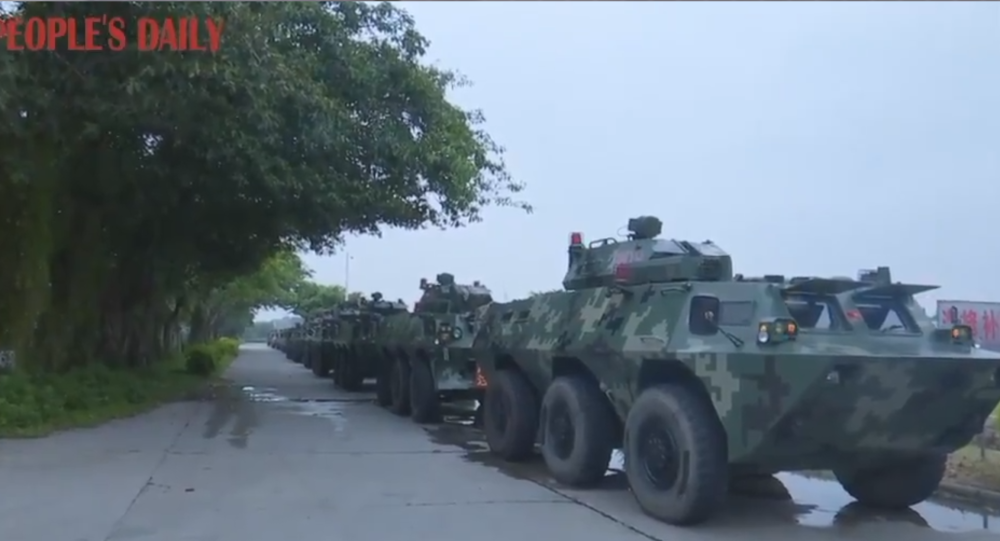 On Monday, both the Global Times and People’s Daily posted a short video clip showing dozens of Armored Personnel Carriers (APC) traveling in a convoy to Guangdong province’s Shenzhen ahead of what a Beijing military expert claims are regular exercises.

The APCs’ guns are noticeably missing from their turrets during the display.

“The central government has repeatedly stated it will only interfere if there are large-scale riots and the Hong Kong government has applied voluntarily for support,” China military specialist Zhou Chenming told the South China Morning Post (SCMP).

“The drill is part and parcel of a well-coordinated attempt by Beijing to pressure the protesters and the general public to give up their five demands, including the one for universal suffrage immediately.”

The demonstrators’ demands, according to the SCMP, include: a withdrawal of the extradition bill, the resignation of two chief executives, a government denouncement of Hong Kong’s labeling of police-protester clashes as “riots,” an independent inquiry or third-party investigation into the actions of the Hong Kong Police Force (HKPF) in the past several weeks and the unconditional freeing of those arrested in relation to the demonstrations.

Protests have grown increasingly violent over the past two weeks, and the autonomous city has seen an increase in clashes between police and those organizing.

One anti-extradition bill demonstrator sent an HKPF officer to the hospital with burn injuries after hurling a Molotov cocktail on Sunday. Throughout the night, law enforcement returned fire on protesters with tear gas and rubber bullets.

The Hong Kong and Macau Affairs Office condemned demonstrators’ use of “dangerous tools” in a Monday statement that claimed the weekend clashes showed “the first signs of terrorism emerging” the autonomous city.

“Beijing has secretly added to the HKPF, which is 30,000-strong, a number of policemen who speak Cantonese like Hong Kong from the neighboring Guangdong province, so that they can better integrate,” Cabestan said on August 6, citing multiple anonymous sources. He later added that “recent sources indicated the number of deployed mainland troops “could be around 2,000”

The HKPF also deployed their own armored personnel carriers last Monday following protests along the narrow streets of Mong Kok. These vehicles, however, are said to function only as “defensive” units, capable of duties such as transporting injured individuals from the scene and destroying protester-constructed barricades.