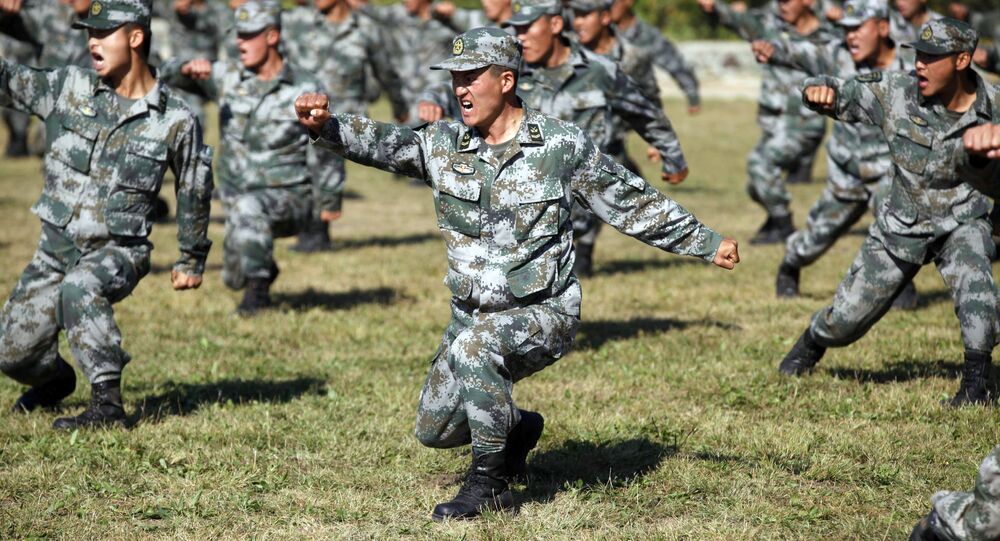 A day after the Beijing liaison office in Hong Kong was attacked and defaced by protesters, news broke that the People’s Liberation Army held drills in nearby Guangdong Province rehearsing its response to an urban uprising.

The PLA’s 74th Army Group announced on a now-deleted post on Weibo that the unit had “recently” held exercises near the city of Zhanjiang in southern Guangdong Province, the state that borders Hong Kong, Straits-Times reported.

Asia Times reported that roughly 1,500 soldiers practiced “swifty quelling large-scale unrest and restoring order in other contingencies such as terrorist attacks in a city and suburban environment,” using a purpose-built site complete with mock streets, schools and residential blocks. Some of the troops present also acted as the opposing force during the drill.

While it’s unclear when the drills were held, the news comes amid growing tensions in Hong Kong, a semi-autonomous city that rejoined the People’s Republic after having been a British colony for 160 years. The city was seized by the British as spoils of the 1838-40 Opium War as part of an attempt to force the Daoguang Emperor to open the Chinese Empire to Western trade, and returned to Beijing by treaty in 1997.

During the period of British rule, Hong Kong grew into a wealthy capitalist playground metropolis governed by British law and customs, and its reincorporation into the socialist state has been tumultuous and sensitive, following a “One Country, Two Systems” arrangement that will slowly phase the city into China by 2047.

When the Hong Kong government weighed amendments to a bill providing for extradition arrangements with the mainland, Hong Kong residents erupted in fury, launching mass protests in which marchers waved the British-era colonial flag and engaged in violent confrontations with police. While Hong Kong's Chief Executive Carrie Lam announced earlier this month that the bill was “dead,” the protests have continued, diffusing into a generalized anti-China sentiment.

On Monday, protesters attacked the Chinese government’s Liaison Office in Sai Ying Pun district, the central government’s main representative in the city, defacing it with eggs and black paint and damaging the building’s plaque bearing the national emblem.

"We absolutely cannot tolerate such embarrassment," Chinese Foreign Ministry spokesman Geng Shuang said Monday, noting that Beijing continues to support the Hong Kong government’s attempts to control the protests, enforce the law and punish criminals. Thousands of riot police have fought back against the rioters with rubber bullets and tear gas, among other tools.

While roughly 6,000 PLA soldiers are stationed in the city, Beijing has been reluctant to deploy them as of yet. Yue Gang, a retired PLA colonel-turned political commentator, remarked on Monday that PLA troops should be sent into Hong Kong if necessary.

“To deface the Chinese national emblem is like acting as an enemy to 1.3 billion Chinese people,” Yue said, AP reported. “They must be deterred.”

In contrast to Yue’s position, Hu Xijin, editor-in-chief of the Chinese Communist Party-owned Global Times, urged caution in a Weibo post Monday, noting that any such move would only further undermine the country’s image and cause the situation to deteriorate further.

“If the People’s Liberation Army helps to stabilize the situation, Hong Kong will benefit from law and order, but the public opinion won’t buy it,” Hu wrote. “The opposition camp would have every means to smear, resist and stir up trouble, and the West as a whole would launch a whole new round of criticism attacking Beijing for destroying its ‘One country, two systems’ pledges, meaning great uncertainty and political cost that would be too big to bear.”