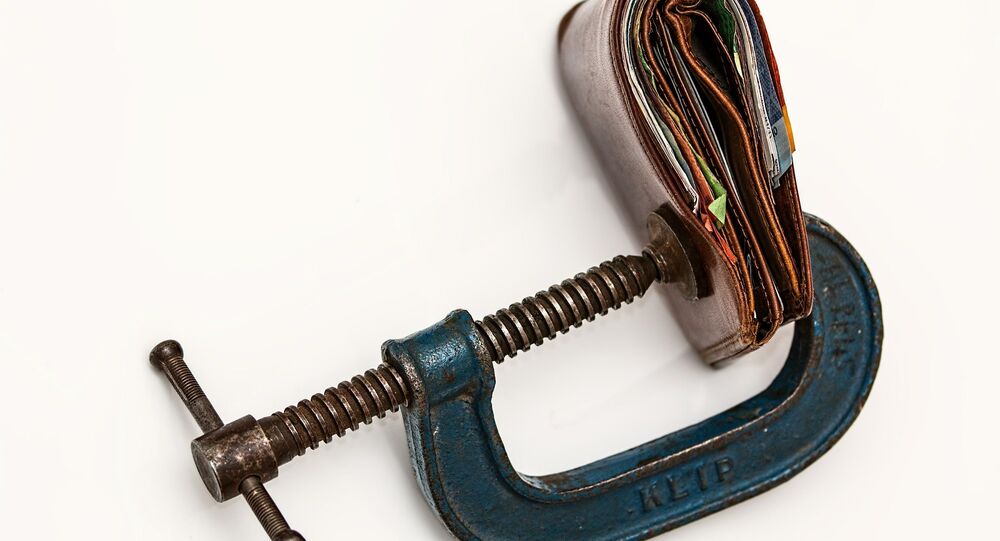 The US national debt has surpassed the 22 trillion dollar mark for the first time; a milestone that experts have warned is further evidence of the deterioration of the nation’s finances and could jeopardise the economic security of every American.

Radio Sputnik has discussed the development with Gregory Daco, head of US Economics at Oxford Economics USA.

READ MORE: Trump's Plan to Rid US of Its Debt in 8 Years is 'Absolutely Impossible' — Prof

Sputnik: $22 trillion, I mean is this really a scary figure? Of course, it is a new high, but has not US debt continued to grow for many, many years now?

Gregory Daco: Yes, it has. And $22 trillion yes it is larger than the size of the US economy, when you measure it by GDP.

But what really is important, I think, is more the publicly held portion of the federal debt, which is somewhat lower, closer to 16 trillion, about 80 percent of GDP in the United States. I think when we look at these figures, we have to consider the fact that the US economy is a very large economy and that over the past few years we have seen this steady increase in the overall debt levels, both in absolute terms, but also as a relative term relative to the size of the US economy.

Sputnik: Donald Trump has actually said he is going to rid the country of its debt in just eight years. How realistic is that objective, particularly, coming from Trump? Do you think Trump is the man who could do this, or is this something that any president could possibly do?

© AP Photo / Andrew Harnik
US's Massive $22 Trillion Debt Not Dangerous…for Now – Former Fed Economist
Gregory Daco: Well, I think that is something that is feasible in the absolute, but not in the short run. If you look at the current situation, we have spending, government outlays that are about 20-25 percent larger than federal government revenues. So you essentially have to bridge that gap and that's not something you achieve overnight. Even over a period of eight years, that would still mean reducing either your outlays or raising your revenues by 3 percent a year, which is quite significant over eight years.

We know that now the situation has actually worsened somewhat, because of the deficit financed fiscal stimulus. So it will actually be harder, going forward, to rid the United States of its deficit. Reducing the debt itself, which is 80 percent of GDP, is something that will not be done in eight years and actually I don't think will ever be done. But bringing the deficit back to a balanced budget can be done, has been done, and was done in the early 2000s in an environment where the economy was growing strongly.

But you always have to remember that if you do this, you have to do this in a growth-friendly way and not in a way that would essentially lead to a downturn in economic activity; therefore, you want to avoid programmes that suddenly slash government spending by 20 percent, because that would have dramatic effects on the US economy.

Sputnik: Overall, has Trump been good or bad for the economy in terms of reducing debt and growing GDP?

© CC0
Russia Continues Selling Off Billions of Dollars in US Debt
Gregory Daco: I think in terms of the overall economic environment, there has been a mix of policies. I think in the short run we did see some positive movements, with the passage of the fiscal stimulus programme that led to a short-term boost in growth, but really no long-term effect and if anything might have precipitated or accelerated this business cycle, because we had a short-term boost in demand at a time when the economy was pretty close to potential.

So the Fed started raising rates faster than it would have otherwise; you have inflation that has picked up and you have a deficit that has increased. If you combine that with the seemingly permanent increase in trade protectionism, along with downside risk to immigration, both of these factors are negatives for the economy. So, over the short run there might have been a short-term boost from the fiscal stimulus and some deregulation, but if you look at the long-term picture, we are really in for somewhat of a more negative policy mix.

Sputnik: Donald Trump has also said that better trade deals could actually decrease the national debt. Do you agree with him and can you explain how that would work?

Gregory Daco: Well, the partial intuition here is that you generate government revenues by imposing tariffs at the border. So when the company is trying to export goods, say from China, and you have imposed tariffs on those goods, you are generating a margin which may be 10, 15, 20, and 25 percent on that specific good. But we are really talking about fairly small revenues. We are talking [about] a few billions of revenues when the deficit is over a trillion.

So, we are really talking [about] very small relations when it comes to what trade can do. I think one important thing that is often forgotten is that trade deficits are not driven by the presence or absence of tariffs, but rather they are driven by the type of economy you have. And in the US we have a demand-driven economy where we tend to import a lot from the rest of the world.

If you want to reduce your trade deficit, you don't really want to be imposing tariffs, because that's not going to be the solution to your perceived problem; what you want to do is you want to be moving towards an environment where your exports and your investments grow faster and you have an economy that exports more and more over time.