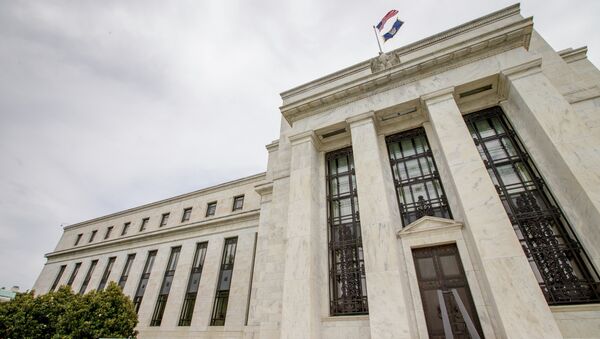 A leading economist and former senior Federal Reserve official has given Sputnik his take on this week's announcement by the Treasury Department that US national debt had surpassed the $22 trillion mark.

The US's record-breaking debt is not a threat to US or global economic stability, at least not for the moment, Joseph Gagnon, a senior fellow at the Peterson Institute for International Economics and former visiting associate director of the division of monetary affairs at the US Federal Reserve Board has said.

"The national debt is far from a dangerous level," Gagnon said in a written commentary for Sputnik.

"We seem to be in a world with low interest rates for a long time, which keeps the debt burden low. That does not mean it's good, just less bad than it would have been 40 years ago," Gagnon explained.

US National Debt Surpasses $22 Trillion Mark for First Time - Treasury Data
According to the economist, the spiraling US debt has been the result of many factors, including former President George W. Bush's tax cuts, the Great Recession of 2007-2009, which prompted the Obama administration to dump hundreds of billions of dollars into the economy in the form of stimulus, "and now Trump's further tax cuts."

The Trump tax cuts are expected to run the budget close to $2 trillion over a ten year period, according to the Congressional Budget Office. Trump's "spending plans are harder to estimate because Congress will modify them and they may change over time, but it is fair to say they contribute less to the debt than the tax changes," Gagnon said.

"My main criticism of the president's tax cuts is that they went almost entirely to the rich and the rich already got most of the benefits of economic growth for more than 20 years now," the economist added.

The US National debt has grown by over $2 trillion under President Trump during his first two years in office. On the campaign trail in 2016, the billionaire real estate magnate promised to eliminate the debt over eight years by creating jobs and renegotiating US trade deals with countries like China.

"The president argues that better trade deals will reduce the overall trade deficit and boost growth, which will boost tax revenues. This is not realistic because we are at full employment already and any further boost to growth would raise inflation, force the Fed to raise interest rates, and choke off growth in other sectors," Gagnon said.

China Faces 'Alarming' Local Government Debt Amid Mounting Trade War With US
Last October, Trump doubled down on his promise to pay down the national debt. However, in December, US media citing sources close to Trump alleged that he had given up on the debt problem, allegedly telling staff "I won't be here" when the debt reaches potentially catastrophic levels.

US economic policy has been criticised by economists and political analysts around the world, with some experts alleging that thanks to the dollar's status as the world's reserve currency, the US can engage in economic behaviour which no other country can afford without suffering hyperinflation and currency collapse.