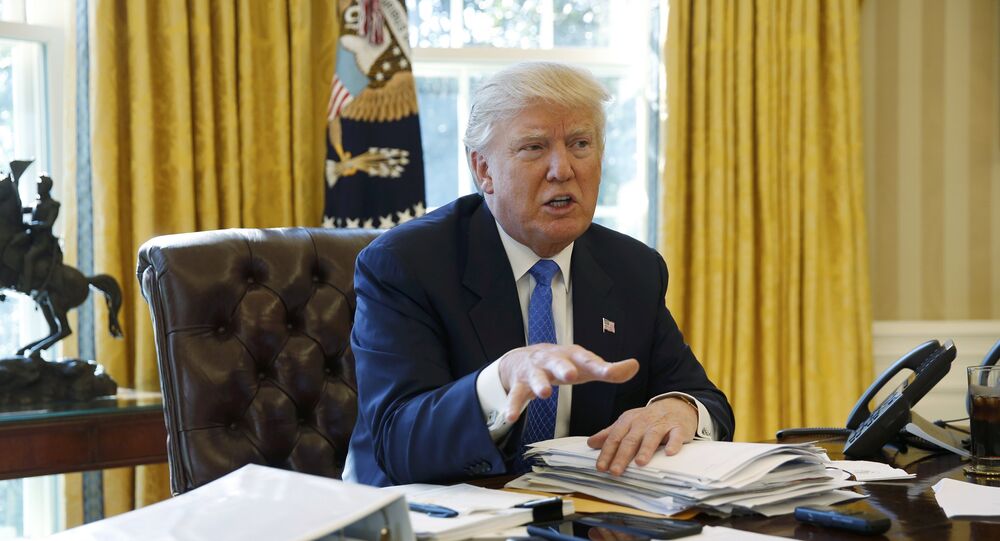 On Tuesday, Treasury Department data showed that the US national debt for the first time ever crossed the $22 trillion mark. Sputnik discussed this issue with Antony Davies, associate professor of economics at Duquesne University and Mercatus Affiliated Senior Scholar at George Mason University.

Sputnik: What has added up to the already enormous national debt? Follow-up: How much has the government shutdown factored in, if at all?

© REUTERS / Lucas Jackson
US National Debt Surpasses $22 Trillion Mark for First Time - Treasury Data
Antony Davies: The national debt has accumulated since the early 1800s, which was the last time that the federal government was debt-free. Wars contribute significantly, but the single largest component of the federal debt is money the government has borrowed from the Social Security trust fund. For comparison, adjusted for inflation, World War II added around $4 trillion to the debt. Borrowings from the Social Security trust fund are almost $6 trillion.

Sputnik: Some experts say that Trump's tax policy and defense expenses have contributed to the debt. To what extent is this the President's fault?

That difference is so small as to be statistically meaningless. However, let's assume that the entire difference (a slowing in the growth of receipts by $24 billion) was due to Trump's tax policy. That $24 billion is one-tenth of one-percent of the debt.

Sputnik: Trump said that he will rid the country of its debt over eight years. How realistic is this objective?

© AP Photo / Andy Wong
Will US Debt Crisis Trigger New Stock Rout, Financial Turmoil?
Antony Davies: Not only was this not realistic, mathematically, it was nearly impossible, and politically, it was absolutely impossible. The political habit to spend ever larger sums of money is so ingrained that, today, politicians routinely describe a spending "cut" as increasing spending by a lesser amount than they would otherwise increase spending.

To balance the budget, Trump would have had to cut the budget by almost 70% and hold it at that level for eight years. That would have meant, for example, shutting down Social Security and Medicare, and cutting the military budget by about 50%.

Sputnik: The President says that better trade deals could ensure the decrease of the national debt. In what manner?

Antony Davies: Trade can impact the debt, but the effect of different trade deals is small enough and the debt is large enough that, for practical purposes, the two are unrelated.

Sputnik: How much is the growth of the national debt is a matter of concern for the US economy and global economy as such?

It's a significant concern. The government doesn't have to pay off the debt. As with a credit card, all it needs to do is to make the minimum monthly payments. In this case, the payments are the interest on the debt.

The government currently pays around 2.6% interest on its debt. At $22 trillion, that's almost $600 billion per year. But, the Federal Reserve has held interest rates so low for so long that it may not be able to raise them again without imposing an unsustainable cost on the government.

© REUTERS / Kevin Lamarque
Trump Ignores US National Debt as He 'Won't Be Here' When Situation Get Out of Control - Report
For example, historically, the average interest rate the government has paid on its debt is 6%. If the Fed allowed interest rates to rise to their historic average, the government would end up paying $1.3 trillion per year just in interest. At that rate, around one-third of the government's tax revenue would be going to interest payments.

Importantly, the government has borrowed so much that it is running out of places to borrow more. American citizens, American companies, and foreigners have been slowing their lending to the government.

The Social Security trust fund, which has lent about a quarter of what the government has borrowed, not only has stopped lending, but will be requiring back the trillions it loaned. That leaves the Federal Reserve to take up the slack.