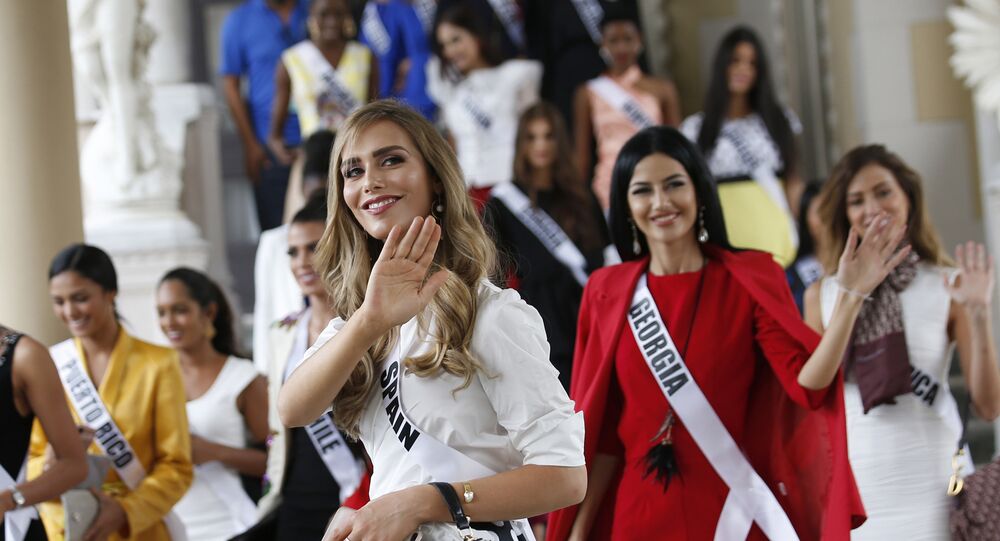 Angela Ponce, a transgender model from Spain, became the first trans woman to compete in the Miss Universe pageant in Bangkok, Thailand, on Tuesday. A trans activist told Sputnik Tuesday that the real challenge was to rise above the “the gaze of cis men” that sees both cis and trans women as desirable, but in different, often contradictory ways.

"Outsiders say what I can and cannot do, what I am and what I am not. No, I'm sorry. To be a woman is your identity. It doesn't matter if you are white, black, if you have a vagina… if you have a penis," she told AFP.

Spain makes history with the coronation of the beautiful trans model Angela Ponce as Miss Universe Spain. The young Sevillian will be the first trans representative to compete in this event to be held in the month of December. #LGBT #MissUniverse 🌈❤️ pic.twitter.com/govWgrtWop

© Sputnik /
Tillerson Out at State? Pompeo In?; Trans Visibility vs Trans Rights
Although she didn't win — that title went to Miss Philippines, 24-year-old Catriona Gray — Ponce saw her performance as a victory nonetheless, the Washington Post reported.

"This is for you, for those who have no visibility, no voice, because we all deserve a world of respect, inclusion and freedom," Ponce wrote on Instagram on Friday. "And today I am here, proudly representing my nation, all women and human rights."

Radio Sputnik's By Any Means Necessary spoke with Dane Figueroa Edidi, a black, Cuban, Indigenous, Nigerian trans woman, performance artist and playwright, about Ponce's historic accomplishment and what it means — and doesn't mean — for trans women.

​Edidi noted that the history of LGBTQ people included a rich ballroom culture of people competing to "celebrate who I am naturally or what I can bring to a space, how I can fill a space with who I am" that goes back decades. "It's not a new thing for the trans community — we've been doing it."

"I'm very proud of her — if that was her dream, that is super awesome," Edidi said. But she remarked there was "something about Miss Universe" that celebrated the "fetishizing of a certain type of woman and a certain type of femininity."

"Shouldn't you have transsexuals in the show? No. No, I don't think we should," Razek told Vogue for an interview published November 8. "Well, why not? Because the show is a fantasy. It's a 42-minute entertainment special. That's what it is. It is the only one of its kind in the world, and any other fashion brand in the world would take it in a minute, including the competitors that are carping at us. And they carp at us because we're the leader."

Razek later apologized for his comments, indicating he was willing to include trans female models in his shows.

My National Costume in Miss Universe is a traditional Spanish "bata de cola". This is an iconic piece in Spain, also known all over the world; it is a precious reference of my country. To make this wonderful National Costume, @luisfernandezdisenador was inspired by a number of things. The first one being the white villages of Andalusia, since we wanted to honor where I come from (Seville). The white of the villages, of purity… White representing peace, the peace that I bring as my message hand and hand with equality, respect, inclusion and love. A white 'bata de cola' that crosses a river of beautiful red carnations made by @hatsbyroiz. Secondly we had the carnations as inspiration because they are the most typical and recognizable flower of my beautiful country. For that reason I wanted this flower and its color because it represents the love that, as Miss Universe Spain 2018, I'm transmitting to the whole world. That is the motivate behind a river of red carnations shaped around my head and body, almost as a Spanish flag. As complements, I carried a fan to expand the scent of our land, a beautiful tortoise-shell & Swarovski clip that crowns my head as Miss Universe Spain 2018.

"Whose gaze are we catering to is often the question that I ask. I think that we also have to be willing to have a conversation where we are fighting against the gaze of cis men and what they think is desirable. And on top of that, I think that we as a culture have to start being honest that we actually do fetishize and sexualize and think that trans women are beautiful and that we allow a certain access to trans women who are perceived as cis-passing and/or [meet] a certain type of beauty standard that is steeped in what they would call ‘conventional,'" she said.

The playwright noted the contradiction inherent in the desire cis men express for trans women: at the same time as they desire trans women, they also target them for abuse, making trans women something that can only be appreciated in the dark and out of the public eye. The result of this, she said, is that trans women wind up getting "not even appreciated, really, [but] used for the pleasure of men, used for the gratification of cis men."

Edidi noted that, while patriarchal ideas only prize cis women "for their body parts" and their ability to provide men with children, trans women can't bear children. "All you can be is the mistress. You're just here for sexual gratification, and that's it." But that even for the cis wife, "her sexual pleasure is unimportant," too.

"I just want to say this to all the cis men who are out there, because I think they need to hear it: cis men, when you date, have sex with, marry, and love a trans woman, it does not make you gay. Trans women are women," she said.

However, the playwright also noted that "toxic masculinity also harms men" because it renders men who have been abused unable to confront and come forward about their abuse. Indeed, data from the Rape, Abuse and Incest National Network (RAINN) shows that 10 percent of rape victims are male and that male students between the ages of 18 and 24 are five times more likely to be raped than other men.

Edidi noted how "patriarchy, misogyny and white supremacy" reinforce one another, especially in the United States because of its colonial history and nature, and that not only defending those systems, but also making them run, requires violence. "Systems that oppress cannot exist without violence… how do you get someone that calls themselves a feminist to also defend transphobia? There has to be a threat of a loss of something, a loss of privilege. There has to be a threat of physical violence if you don't agree with your husband or your other TERF [Trans-Exclusionary Radical Feminist] sisters. And there also has to be fear — you must have people fear that the world is going to go to shreds, to nothingness, if they choose to actually have everybody be free and liberated and loved and honored."

"For me, the thing is that we have to destroy all of these oppressive systems so that we all can be a better society," Edidi said. "Imagine if everyone… was able to be everything that they dreamt of being, fully supported by our culture. We would be having flying cars by now, we would be having a world where there's sex positivity. Rape culture would be ended. There would be no slavery and no homelessness and no people dying of sicknesses that can be prevented with good healthcare. There would be none of those things."

"I think all of those things have to exist together. I think that we can look at the Janet Mocks and the Laverne [Coxs]… they look at people they see as successful without then also saying, ‘But yes, we can't just hold all these exceptions to everyone's face and expect for everybody to make it.' So why is it that not everybody can make it? It's because this system exists," Edidi told Sputnik. "This system's gotta go, so that we can have more exceptions."

The author of this article, Morgan Artyukhina, is a transgender woman.