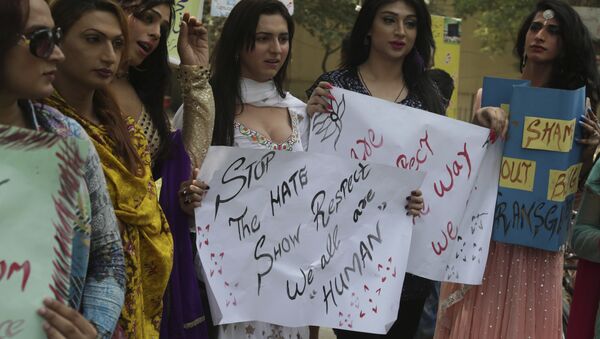 Following efforts to organize a cadre of transgender political candidates for office in Pakistan’s upcoming elections, a growing movement in Lahore to boycott the polls is taking shape in the wake of news that transgender and third gender candidates will not have their own gender registration category.

Transgender and khawaja sira, or third gender, candidates have recently won a slew of political rights and legal protections in Pakistan, following the passage of the Transgender Persons (Protection of Rights) Bill 2018 last month, Sputnik reported. One of the provisions of that law is the right to vote in elections for all levels of government and the equal right to pursue public office — a key protection that transgender activists had hoped would underpin the entry of a slate of political candidates from their community in the upcoming general elections scheduled for July 25.

However, now the large transgender community in Pakistan's second-largest city of Lahore is mobilizing to boycott those very elections on account of nomination papers they say disrespect their identities.

The issue was first raised in Pakistan's northwestern Khyber-Pakhtunkhwa Province on June 5 by TransAction Khyber Pakhtunkhwa President Farzana Riaz, who criticised the Election Commission of Pakistan for providing nomination forms for candidates that "do not have a separate section [for] transgender persons," who are thus "being forced to choose between male or female," The Express Tribune reported. That's a slap in the face to khawaja sira people, who represent a distinct third gender in Desi society that is neither male nor female, especially considering Pakistani trans people have the option of registering as Third Gender on their passports and national ID cards.

Following that revelation, the call for boycott arose in Lahore, in the country's east. "Since our different identity is not being accepted, hence there is no use of contesting the elections," Neeli Rana, field supervisor at the Khawaja Sira Society, told the Express Tribune June 12.

Last October, activists organized the All Pakistan Transgender Election Network (APTEN), Pakistan Point reported at the time. The group focuses on the invisibility of leaders from the transgender community and comprises a number of advocacy groups, including TransAction KP, the Sindh Transgender Welfare Network, the Balochistan Alliance for Transgender and Intersex Community and the Punjab Transgender Foundation. The group recently issued a charter of demands calling for the removal of systemic barriers to the entry of transgender people into politics and for political parties to include more trans people in their ranks.

"Given the power of presence, and the paucity of role models in all spheres of life, the potential influence of having transgender-identifying representatives who can stand in the public spotlight and demonstrate the legitimacy, value and dignity of transgender lives and political claims is huge," TransAction KP President Farzana Jan said at a Wednesday news conference.

APTEN had initially hoped to field 13 transgender and khawaja sira candidates in the upcoming general elections; two running for the National Assembly and 11 for provincial assembly seats. Two other would-be candidates, one in Peshawar and one in Haripur, were beaten up and harassed after their intentions to contest the upcoming elections became public knowledge, which prevented them from registering, Dawn reported. However, since the announcement of the boycott, "several" candidates have announced participation in it, the Times of India reported.