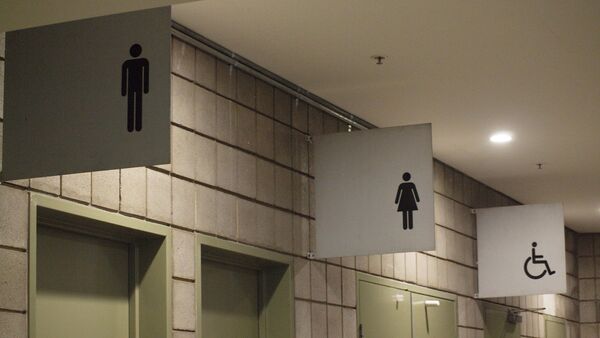 Subscribe
A longshot Republican congressional candidate in California took it upon herself Wednesday to harass a transgender woman in a public bathroom and then post a video of the incident on Facebook as part of her crusade against the “family values issue” of trans rights.

Jasmine Saavedra wants to be the next representative in Washington, DC, for California's 44th Congressional District. The self-styled "Spoke person of Latinos For Trump California," according to her Twitter bio, plans to get there on the accumulated shame of women who need to pee and happen to be transgender.

Saavedra posted a video to Facebook Live on May 16, filmed at a Denny's restaurant in Los Angeles' Koreatown, according to RawStory, with the caption: "a man in the ladies room saying he is a woman (Obama legacy) As your next congress woman I will fight to get our right to have a ladies room just for us back."

In the video, she says she went to the use the restroom and found the stall occupied. She went and got the manager and returned to the bathroom with her phone on a selfie stick, which is how the video begins. As she enters the bathroom, the male manager is seen already inside, rapping on the side of the stall. Saavedra screams at the woman in the stall as the woman inside yells back, "You're invading my privacy!"

Saavedra responds that "you're invading my privacy because I'm a lady and I deserve to use a ladies room."

Saavedra then she leaves the bathroom and does a lap around the dining area, fuming at the camera, before returning to the hall outside the bathroom to "see [her] coming out of the room."

As the woman leaves the restroom escorted by the manager, she says to Saavedra, "You've singled me out for no reason. And I've seen you yesterday following me… I recognize you."

Saavedra follows the woman out of the restaurant, yelling at her "next time use the men's room… or nobody's room!"

In a final monologue after returning to her table, Saavedra says, "This is so stupid, in California, how they let people say ‘it's a lady'… How can I be with a man inside of the ladies room just because he thinks he's a lady? This is unbelievable. Only in California this happens."

She further boasts of how the manager helped her, how she had her pepper spray ready and laments that she couldn't find her stun gun, which she says women must have to protect themselves from "crazy people" in women's restrooms.

"We need to respect women," Saavedra declares without a hint of irony, having just had a woman forcibly removed from a restaurant for daring to answer nature's call in the bathroom corresponding to her gender.

Denny's responded to the episode Friday with a statement repudiating Saavedra's bigotry. "We are extremely disturbed by the incident that took place at our Los Angeles restaurant this week. At Denny's, we do not tolerate discrimination of any kind, inclusive of gender identity and sexual orientation. We are dedicated to providing a welcoming dining environment for all our guests and believe that our transgender guests and team members should be allowed to use the bathroom of the gender they identify with. Our restaurant teams attend training which covers our policies against discrimination and promotes respect for all guests," the restaurant said.

However, the statement goes on to note that " the video of this incident does not tell the full story."

"Our manager was approached by a guest complaining that a man was in the women's restroom. Once a female team member checked that no one else was in there, the manager entered. Before seeing the guest, the manager observed drug paraphernalia on the floor near the guest and asked the guest to leave based on that observation, and not on her gender identity," the statement says.

Neither the manager nor Saavedra are ever heard discussing drug paraphernalia in the video and it's clear from Saavedra's statements on camera that her problem with the situation is that she believes the trans woman is a man and poses a danger to her in the bathroom.

Saavedra's electoral rival, Democratic incumbent Nanette Diaz Barragan, told The Advocate Friday, "I was appalled by the treatment that this woman received for simply trying to use the restroom. Everyone has the right to their own identity and the right not to be discriminated against for who they are."

The Advocate noted Thursday that, contrary to Saavedra's claims of danger from the situation, "There has never been a case of a transgender person attacking or harassing anyone in a bathroom anywhere in the country."

Los Angeles LGBT Center Chief of Staff Darrel Cummings commented on the episode in a statement Thursday, saying, "the current administration has emboldened people to express their ignorance and hatred in a way that is so odious and shameful that we are required time and again to actively resist," adding that "ignorance, fear-mongering and harassment have no place in a country founded on principles of equality and mutual respect. On this International Day Against Homophobia, Transphobia, and Biphobia, let this candidate's disgraceful behavior be a rallying cry for us all to stand up for what is right."

No national legislation protecting transgender civil rights exists in the United States. Under the administration of former US President Barack Obama, the US Supreme Court and Justice Departments reinterpreted a number of civil rights laws, notably Title VII of the Civil Rights Act of 1964 and Title IX of the Educational Amendments Act of 1972, as protecting against discrimination on the basis of gender identity. However, the Trump administration has slowly rescinded nearly all of these protections, reinterpreting them as not protecting transgender or gender-nonconforming people from discrimination.

California has its own law, which took effect on March 1, 2017, mandating that single-occupancy public bathrooms must be gender-neutral, but it does not protect multi-stall bathrooms such as those at a restaurant like Denny's, leaving the issue up to the whims of company policy.

The author of this article is a transgender woman.