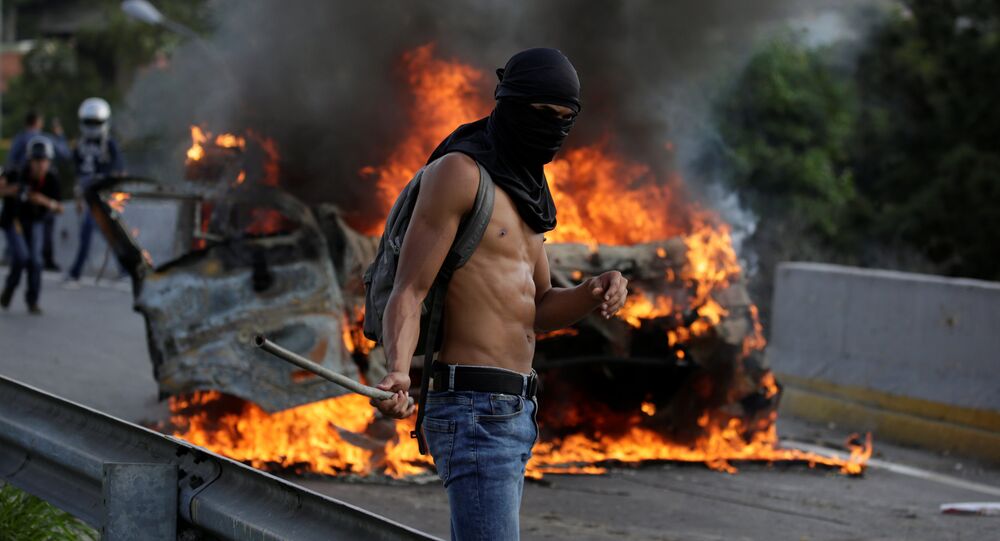 The so-called "Atlanta plan" that envisages the ousting of left-leaning politicians across Latin America is seemingly taking shape on the continent, former Vice President of Uruguay Raul Sendic told Sputnik in an exclusive interview, bemoaning the recent rise of ultra-right forces across the globe.

"Since the existence of the 'Atlanta Plan' became known, that sought to destabilize left governments in Latin America, every day it became clear to us how this plan was to be implemented in each individual country," former Vice President of Uruguay Raul Sendic (2015 — 2017) pointed out in an exclusive interview with Sputnik Mundo.

Sendic referred to an alleged plan unveiled by Manolo Pichardo, Dominican politician and president of the Permanent Conference of Political Parties of Latin America and the Caribbean (COPPAL), in his article for Listín Diario published on March 11, 2016.

© REUTERS / Carlos Barria
Trump Has Taken a 'Hard Line' on Latin America From the Start - Scholar
According to Pichardo, during a 2012 conference at a Marriot hotel in Atlanta right-wing and center-right Latin American policy makers who sought to bolster ties with the US outlined a specific plan targeting progressive and Communist governments in South America. The Dominican politician wrote that the grand design envisaged initiating defamation media campaigns against left-leaning leaders and translating them into corruption scandals and trials.

Sendic believes that the purported plan has been turned into reality.

"This was done through political parties or alliances with certain social strata," the ex-vice president said. "Also, social networks were used in the same way as it was done during the Arab Spring. Recently, democracy has been significantly weakened in Latin America."

© AP Photo / Ariana Cubillos
Masked anti-government demonstrators stend to a burning barricade during a protest against the installation of a constitutional assembly in Caracas, Venezuela, Friday, Aug. 4, 2017

The Uruguayan politician presumed that Latin America's progressive development had affected the interests of "some global powers": "The US could not ignore the creation of the so-called BRICS that was seeking alternative ways to facilitate the development of the third world countries."

Sendic explained that in contrast the US was interested in reducing the countries' incomes by depreciating their exports and limiting external investments to the Latin American region. At the same time, Washington has carried out propaganda campaigns though media and social networks and transferred political issues into the judicial sphere.

"Many state-run endeavors carried out on the South American continent were carried out at the expense of the middle class, professionals and workers, and therefore they [anti-left forces] enjoyed possible discontent in these strata of the population in order to find a social basis that could ensure the kind of intervention that has already taken place in Nicaragua, Venezuela and at a certain moment in Brazil," the ex-vice president emphasized, adding that he himself survived almost "two years of a fierce information war, parliamentary inquiries and various accusations."

© REUTERS / Carlos Garcia Rawlins
Venezuela Crisis: Washington Wants 'Its' Country Back
"Bias at the level of the media and public opinion was monstrous," he remarked.

According to Sendic, the situation is steadily deteriorating in Latin America and beyond. The politician raised the alarm about the rise of ultra-right and fascist groups across the world.

"Fascism manifests itself openly in Latin America and throughout the world," he said. "For the first time, it has openly appeared in Europe, then in the US, where a demonstration recently took place in front of the White House; features of fascism have appeared in Latin America. In some sectors of society, the poor and immigrants are being expelled, as if they are to blame for their situation."

Uruguay has long been a battle-ground for left-wing and the US-backed right-wing forces. In 2017, a three million-page archive on the CIA's clandestine operations in Uruguay between 1985 and 2004 was revealed. The operations were conducted in close collaboration with Uruguayan military officials and were aimed at suppressing left-wing politicians and movements.