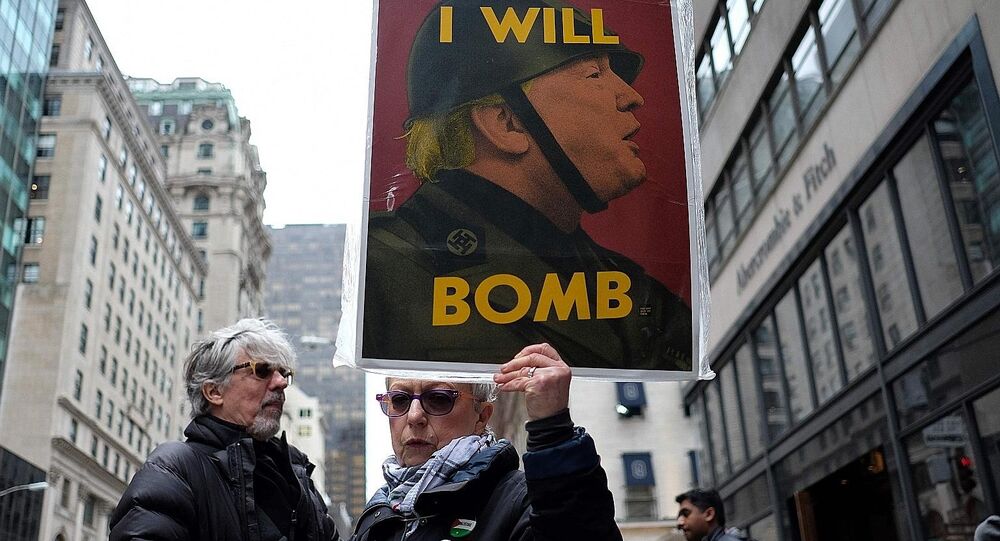 US President Donald Trump is unlikely to deliver on his Twitter promise to launch a missile attack against the Syrian Arab Army (SAA), Lebanese military analysts told Sputnik, explaining that the potential move could prompt dramatic shifts in the Syrian war theater.

Donald Trump's threats to launch a strike on Syria is an attempt to shift the attention of the US public to the possibility of an overseas operation, Lebanese military analyst and Retired General Hisham Jaber told Sputnik Arabic.

According to Jaber, the US won't launch the attack the US president is tweeting about: "Russia remains a deterrent against this dangerous step. Russia has already stated that it will respond to a possible blow. The Shayrat airfield incident will not happen again," the military analyst stressed, referring to the April 7 2017 missile strike conducted by the US on the Syrian Arab Army's (SAA) airbase over the alleged chemical attack in Khan Sheikhoun, Idlib province.

On April 11, Trump called upon Russia to "get ready" for a US missile strike: "They [missiles] will be coming, nice and new and 'smart'!" the US president tweeted.

© CC0
Is It Today? US Doomsday Plane Takes Off Amid Tensions in Syria
In response, Russian Foreign Ministry spokeswoman Maria Zakharova noted on her Facebook page that "smart missiles must strike terrorists, not the legitimate government that has been fighting international terrorism on its territory for several years."

"Currently, Russian troops are deployed in Syria and [Moscow] has clearly articulated its position. Do the Americans want a conflict with Russia? It has never happened, even during the Second World War. I think that the Americans would conduct a limited strike on Syria to completely save the face of Donald Trump in his homeland," Jaber opined.

The retired general noted that there are many targets in Syria that the US could strike. However, one should keep in mind that Trump will do it only if he is confident that his move won't be followed by a tough Russian response, the Lebanese military analyst said, adding that it could become the beginning of a larger conflict. "Any American and Israeli aggression in the region will have serious consequences," he warned.

General Mahmud Matar, former commander of the Lebanese Air Force, echoed Jaber by saying that "no one wants provoke a third world war which would be a disaster for everyone."

"Today's escalation in Syria occurs mainly in the information field," Matar believes. "This is a war of nerves. The victories of Russian military forces, the Syrian Arab Army (SAA) and its allies are ruining the plans of the US and Israel to divide Syria. I do not think that something will change dramatically in Syria. Russian troops are fulfilling their tasks and they will continue to do so."

© REUTERS / Shannon Stapleton
US Intervention Against Syrian Army Could Revive Daesh in Syria – Ex-UKIP Leader
According to the Lebanese general the ongoing crisis was caused by the fact that some parties involved in the conflict "have driven themselves into a corner." Currently, Russia, the US and their allies are on opposite sides; however, a solution could be reached through mechanisms of the UN Security Council, Matar suggested.

"Today we constantly witness attacks and counterattacks," the general continued. "Each of the parties can use ballistic missiles. How far can this go? Will US ground forces land on the Syrian coast? I do not think so. The US and its allies understand that this is a very serious move which would be followed by very dangerous changes."

Following the alleged use of chemical weapons in the Syrian town of Douma, Eastern Ghouta, on April 7, Donald Trump pointed the finger of blame at Syrian President Bashar al-Assad and accused Russia and Iran of backing him. Presenting no evidence to support its allegations, the Trump administration signaled that a military option against Damascus is not "off the table."

The situation evokes strong memories of the alleged chemical strike in Khan Sheikhoun, Idlib province. Regardless of the fact that the Syrian Arab Air Force's (SyAAF) involvement in the purported incident was not proven, Trump authorized an all-out Tomahawk attack on the Shayrat airfield on April 7.

On April 9, US President Trump announced that he would decide how to respond to the supposed use of chemical arms "over the next 24 to 48 hours."

Is It Today? US Doomsday Plane Takes Off Amid Tensions in Syria