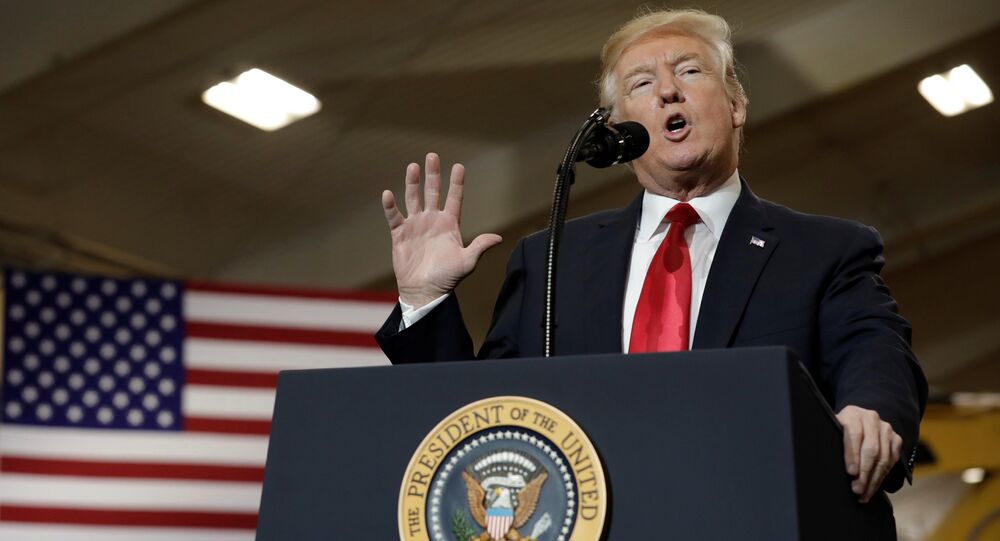 The Russian Foreign Ministry spokeswoman has retaliated to the US President's latest tweets, claiming relations with Moscow were worse than during the Cold War and threatening a direct strike on Assad's forces following an alleged chemical attack in Douma.

"Smart missiles must strike terrorists, not the legitimate government that has been fighting international terrorism on its territory for several years," said Russian Foreign Ministry spokeswoman Maria Zakharova when she took to Facebook to respond to Donald Trump's latest tweets on a possible military strike on Syria.

Zakharova went on to say that any strike could be a possible attempt to cover up the evidence proving that there had been no chemical attack in Douma.

Responding to President Trump's call to stop what he described as an "arms race," the spokeswoman noted that it was a "great idea," and suggested starting "with US chemical weapons."

The United States is believed to be the owner of the world's largest stockpile of chemical weapons (more than 2,500 metric tons of the most dangerous weaponized toxic substances), while Russia's arsenal was completely destroyed in 2017 under OPCW observation.

The harsh remarks from Moscow follow the US president's tweets calling for Russia to "get ready" for "nice and new and smart" American missiles in Syria.

The threatening tweet was followed by another post, with Trump urging Russia to end what he called an "arms race":

POTUS also tried to explain the reason for the hostility in relations with Russia, blaming it on Special Counsel Robert Mueller's probe into the alleged collusion between the Trump campaign and the Kremlin during the 2016 election in the United States:

Earlier in the day, Yevgeny Serebrennikov, first deputy chairman of the Russian upper house's defense committee, had warned that Russia will respond immediately if its servicemen in Syria get hit by potential US strikes.

“As the Defense Ministry has already pointed out, the Russian military bases in Hmeymim and Tartus are under firm protection. At the same time, we expect that in the event of US strikes, if any, the lives of our servicemen will not be in danger. I think that the United States understands this and will not allow it, because otherwise, Russia's response will be immediate, as the chief of the Russian General Staff has said," Serebrennikov commented.

Media reports suggested that Trump and his advisers had been weighing a "powerful" military response to the alleged use of a chlorine bomb, deeming it the only credible way to deter further chemical attacks. The Turkish news agency Yeni Safak reported, citing international relations scholar Zakariye Molahafci, that the US had designated 22 targets, including Russian sites, in Syria.

The United Nations Security Council voted against Russia’s draft resolution favoring a fact-finding mission by the Organization for Prohibition of Chemical Weapons (OPCW) in Syria; while Russia, China, Kazakhstan, Bolivia and Ethiopia supported the draft, the US, France, the UK and Poland voted against. Other members of the UNSC abstained from voting.

On April 7, several media platforms, citing militants, reported that Syrian government forces had used chemical weapons against civilians in the city of Douma in Eastern Ghouta. The story was immediately picked up by the White Helmets, who started posting unverified footage of the aftermath of the alleged attack, claiming that up to 70 people had died of "widespread suffocation."

© REUTERS / Bassam Khabieh
500 Patients 'Exhibiting Signs & Symptoms' of Chemical Poisoning in Douma - WHO
Reacting to the reports, the United States and its allies blamed Damascus for the chemical attack, underscoring that a "history" of using such weapons by the Syrian authorities was "not in dispute." While Bashar al-Assad's government denied the allegations, arguing that the entire incident was staged, President Trump discussed the issue with his European counterparts, agreeing to work together to hold the perpetrators accountable.

The Russian Defense Ministry, in turn, stated that no traces of chemical agents had been found in the area of Douma, where the alleged attack had taken place.