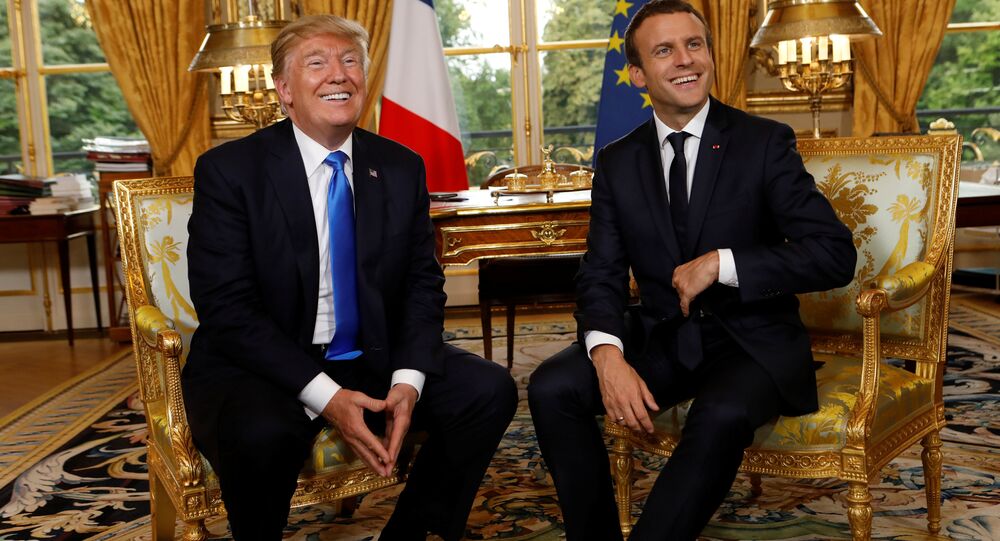 Washington and Paris are seemingly seeking ways to mend fences with Turkey after Ankara's trust in the US has largely been undermined, Turkish analysts suggested while speaking to Sputnik. The US and France want to boost their positions in Syria, however, it is unlikely that they will succeed in the near future, they added.

It is highly unlikely that US President Donald Trump will withdraw from Syria any time soon, while French President Emmanuel Macron's pledges to mediate between Ankara and the Kurdish militias on the ground is nothing but wishful thinking, Turkish analysts told Sputnik.

"Just 15 days ago Trump said that Obama's withdrawal from Iraq was a mistake and that he would not take such a step in Syria," Baris Doster, political scientist at Marmara University, told Sputnik Turkey. "Moreover, by now the US has invested heavily in [Kurdish] self-defense units and the Democratic Union Party (PYD) which they regard as their ground force. To date [the US] has supplied Kurdish formations with 5,000 trucks of weapons, while planning to create a regular 50,000-strong army out of the members of these formations."

According to Doster, there are at least 20 American bases in the territory of Syria. The Turkish political scientist suggested that having made such huge investments, the Americans are unlikely to leave the country.

© REUTERS / Rodi Said
Fight Against Daesh at Stake: US vs. Turkey in Syria's Manbij
Trump's sudden announcement was followed by Emmanuel Macron's vow to support the Syrian Democratic Forces (SDF), send more troops to the Middle Eastern region and facilitate negotiations between Ankara and the Kurds. The statement was lambasted by Turkish President Erdogan, who stressed that Ankara won't sit at the negotiating table with Kurdish militiamen whom the Turkish leadership sees as affiliates of the Kurdistan Workers' Party (PKK), banned by Ankara.

"Hosting, at the most senior level, members of a terrorist organization… is nothing short of hostility towards Turkey," Erdogan said, referring to Macron's high-level meeting with an SDF delegation on March 29.

"If one takes into consideration France's position and influence, as well as its relations with the Mediterranean region, particularly with Syria, one could say that [Paris'] attempt to play a role in Syria, having taken advantage of Trump's statement about American troops upcoming withdrawal, reflects both contradictions between the imperialist centers and their cooperation," Doster said, adding that France has long been seeking to influence Syrian affairs.

For his part, Bora Bayraktar, Turkish journalist and Middle Eastern affairs analyst, suggested that Ankara's Afrin operation had dealt a heavy blow to Washington's plans to solidify its positions in the region with the help of the Kurdish-dominated SDF. It has prompted the US "to seek new tools," according to the journalist.

"There is another important issue connected with Turkey's close interaction with Russia and Iran within the framework of the Astana and Sochi talks on the resolution of the Syrian crisis," he remarked, citing the fact that Turkey is a NATO member-state.

© AP Photo / Lefteris Pitarakis
It Was Kurds' Big Mistake to Stop Syrian Army From Entering Afrin – Politician
Bayraktar believes that having failed to accomplish their tasks through pressuring Turkey, Western states are now trying to achieve their goals through dialogue with Ankara.

"Since Turkey's confidence in the United States has been largely undermined, it is an attempt by to build bridges with Ankara through France," the journalist suggested.

He presumed that the Turkey issue could be discussed during the March 27 telephone conversation between Trump and Macron.

"However, it is obvious that such initiatives as mediation between Kurdish detachments and Ankara cannot find support in Turkey, and the chance of their implementation tends to zero," Bayraktar opined.

As for Trump's plan to leave Syria, the journalist appears to share Doster's stance: "I do not think that the US will leave Syria, and that France will send its military there."

"These steps require significant expenditures, while their consequences are unpredictable," he said. "Currently, there is no apparent reason for such actions. In particular, the US currently has 20 bases in Syria, its troops are deployed east of the Euphrates River."

At the same time, one should look at the bigger picture, the journalist noted, citing Washington's plan to beef up its military presence in Iraq.

As for France, it is unlikely that Paris, which already has problems with Daesh, would intervene in Syria, thus indirectly facilitating the growth of radicalism among migrants living in France, Bayraktar remarked, suggesting that Macron's statement is nothing but an attempt to divert public opinion away from the trade union demonstrations in the country.

The views and opinions expressed by Baris Doster, Bora Bayraktar are those of the contributors and do not necessarily reflect those of Sputnik.