As the crusade against Russia over its alleged role in the poisoning of an ex-spy heats up, all without any solid evidence, Sputnik spoke with Italian deputy Paolo Grimoldi about the upcoming World Cup, Italian elections and damage that the anti-Russian sanctions have done to the Italian government.

In accordance with the will of the voters, the next government will have to distance itself from the old policy that has always assigned Italy the role of "executor" of orders from Brussels or Washington, according to Sputnik Italy.

The "anti-Italian" policy has inflicted obvious damage to its national interests. One of the most vivid examples is the sanctions against Russia. "This will be a serious challenge for the new Italian government," MP and National Secretary of the League of the Lombardy region, Paolo Grimoldi said in an interview with Sputnik Italy.

He went on to say that if the future government abolished the anti-Russian sanctions that are “useless and harmful to Italy”, approves the autonomy agreement for Lombardy and Veneto, reduces taxes, it would have a politico-pragmatic meaning.

According to the MP, Matteo Salvini who is an Italian politician and member of the European Parliament has the potential to become Italy’s future prime minister.

“The elections confirmed that right now the leader of the center-right is Matteo Salvini, therefore, he is our candidate for the post of prime minister. Thanks to the incredible results of the elections, we have the honor not only to work as leaders of the League, but to lead the entire center-right flank,” Grimoldi said.

Talking about what would change if Salvini becomes  prime minister, Grimoldi said that the political sphere would change dramatically and the interests of the Italian people would come first.

“This, for example, means the lifting of sanctions against Russia, the expulsion of illegal immigrants, the restoration of confidence in the judiciary, since criminals very often fall under amnesty, and those who comply with the law are often unfairly fined,” the MP said.

He went further saying that it would also be fitting to introduce a system of proportional taxation or the flat tax, as, for example, in Russia.

“And we really want to ratify the agreement on the autonomy of Lombardy, Veneto and even Emilia-Romagna, which also spoke for it, although the Democratic Party is in power over there. That's what we plan to achieve if Salvini becomes the prime minister,” Grimoldi said. 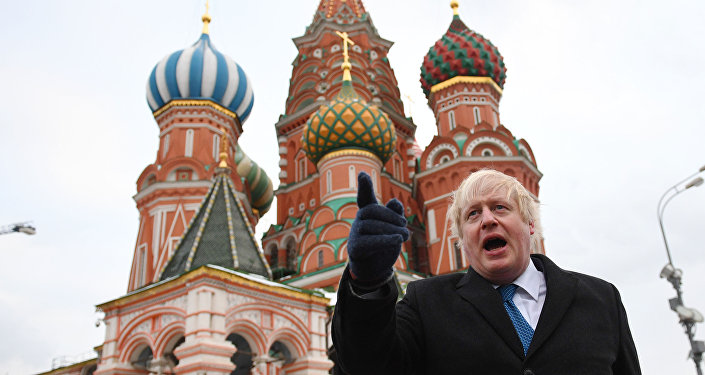 © AFP 2019 / Stefan Rousseau
'Lying Full Volume': Twitter Blasts Boris Johnson Over Latest Skripal Case Claims
Talking about the current political tensions with regard to Britain and Russia’s relations, the MP said that it might be important to ask the British government as to why all the traitors to Russia receive UK citizenship.

“It seems to me that no one has ever given this a logical explanation,” Grimoldi said.

He further said that if Britain decides to boycott the World Cup, it will hurt British fans, not the rest of the world.

“And what advantage does Italy get! Theresa May has already done a great favor to Russia, by strengthening the support of Russians for President Putin, now she, in football terms, must do a "double" by withdrawing the English team and thus giving Italy the opportunity to replace it. It would be a brilliant move. In May we trust,” the MP concluded.

Britain has expelled 23 Russian diplomats, canceled high-level contacts, and promised a ministerial and Royal family boycott of the upcoming World Cup in Russia over the poisoning of Russian ex-spy and MI6 informant Sergei Skripal and his daughter.

After accusing Moscow of being behind the alleged attack, UK authorities dismissed Russia's proposal to carry out a joint investigation, and ignored its request to provide it with a sample of the poison used in the attack.

The views expressed in this article are solely those of Paolo Grimoldi and do not necessarily reflect the official position of Sputnik.