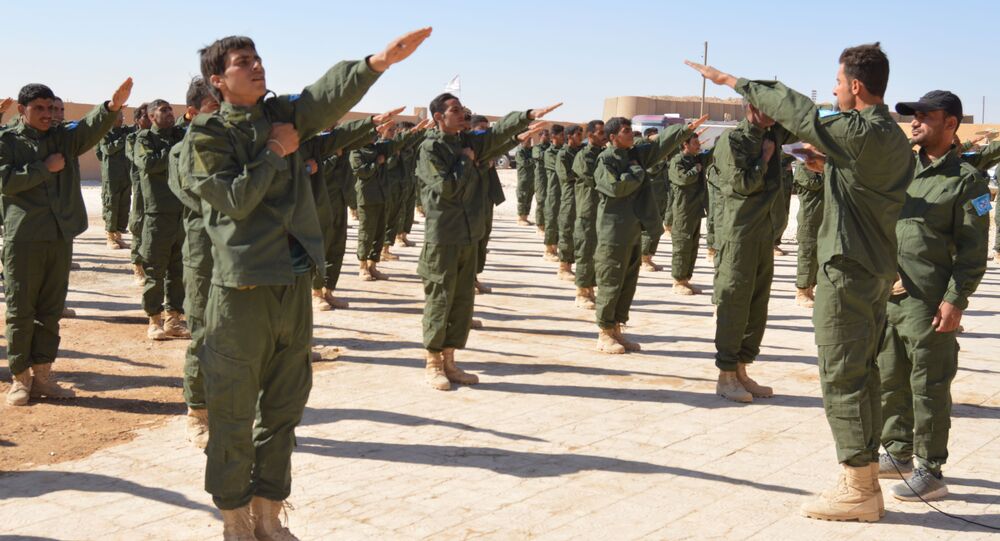 The SDF and YPG spokespersons commented on the US initiative to form a so-called Border Security Force in northern Syria. According to the spokespersons, the new military formation will defend the borders of the self-proclaimed Kurdish federal entity.

Representatives of the Syrian Democratic Forces (SDF) and the Kurdish People's Protection Units (YPG) confirmed the US-backed plans for creating a new military structure on the border territories controlled by the Kurds.

"We have a project of forming a 30,000-strong force to ensure the security of frontier zones," a spokesman for the Syrian Democratic Forces (SDF), Mustafa Balli, told Sputnik Turkey. "We maintain allied and partner relations with the United States. We intend to implement some joint plans in 2018 within the framework of these relations. One of these initiatives is to increase the number of our military personnel up to 30,000 and train them for fulfilling tasks of ensuring border security."

Balli pointed out that Washington had taken a favorable view of the "federal region of northern Syria" unilaterally proclaimed by the YPG. The entity has not been recognized by any country.

"Thirty thousand fighters will ensure the security of the borders of the Democratic Federation of Northern Syria (DFNS)," the SDF spokesman said. "America has a positive view about the idea of federalism, and is supporting us on this matter."

© AP Photo / Syrian Democratic Forces
US Plans For Border Security Force in Syria May Spawn Separatist Movement
According to Balli, the 30,000-strong force will protect the Syrian-Turkish and Syrian-Iraqi borders, as well as the border that separates the self-proclaimed entity from the Syrian government forces.

"This means that a border of a federal entity has been formed within the Syrian territory," the spokesman specified, adding that "the US has adhered to an allied position on this issue."

The spokesman underscored that the newly formed army will become a large-scale and all-encompassing military force. He emphasized that the SDF wants to turn their military contingent into a professional well-trained army.

"We want to move confidently towards federalism," Balli stressed. "Our partners [Washington and the US-led coalition] approve of our actions. The YPG self-defense units, SDF fighters, as well as some other elements will be incorporated into the new military structure. The new army will include Kurds, Arabs, Assyrians and other peoples."

According to the SDF spokesman, the US provides both training and weapons supplies for the new structure. "Especially, a lot of recruits come from Deir ez-Zor and Raqqa to join the ranks of the new army," he remarked.

A spokeswoman for the self-defense units of the Kurdish YPG and women's defense forces (YPJ) division, Nesrin Abdullah, underscored that the 30,000-strong force will not be regarded as an independent army since it subordinates to the SDF.

"It would be more correct to call this formation not an army, but a military force within the SDF," Abdullah explained.  "Our military plans envisioned the creation of such a force. [The US-led] coalition will conduct the training of soldiers. In addition, the coalition will continue to provide arms. We continue to negotiate with the coalition forces. The YPG women's detachments will not be part of the new military formation, since our women fighters do not take part in ensuring security at the border."

© AFP 2020 / STRINGER
Syria Considers US Plan on Creating Border Security Force 'Blatant Aggression'
The US announced Sunday that it would support the creation of a "border force" to protect territories controlled by US-backed Kurdish-dominated fighters in northern Syria.

In response, the Syrian Foreign Ministry denounced the plan as a "blatant aggression on the sovereignty and territorial integrity of Syria and a flagrant violation of international law."

Ankara echoed Damascus in condemning the plans of the United States to create the so-called Border Security Force in the Syrian territory controlled by the SDF militia.

Speaking to Sputnik on Sunday, Chairman of the Defense Committee of Russia's State Duma Vladimir Shamanov pointed out that Russia and its partners are likely to take measures in response to the US-led coalition's move.

"[Such a behavior by the US-led coalition] stands in direct confrontation [with Russia's interests], and we and our colleagues will certainly undertake certain measures on the  stabilization of the situation in Syria," Shamanov stressed.

The views and opinions expressed by Mustafa Balli, Nesrin Abdullah are those of the speakers and do not necessarily reflect those of Sputnik.