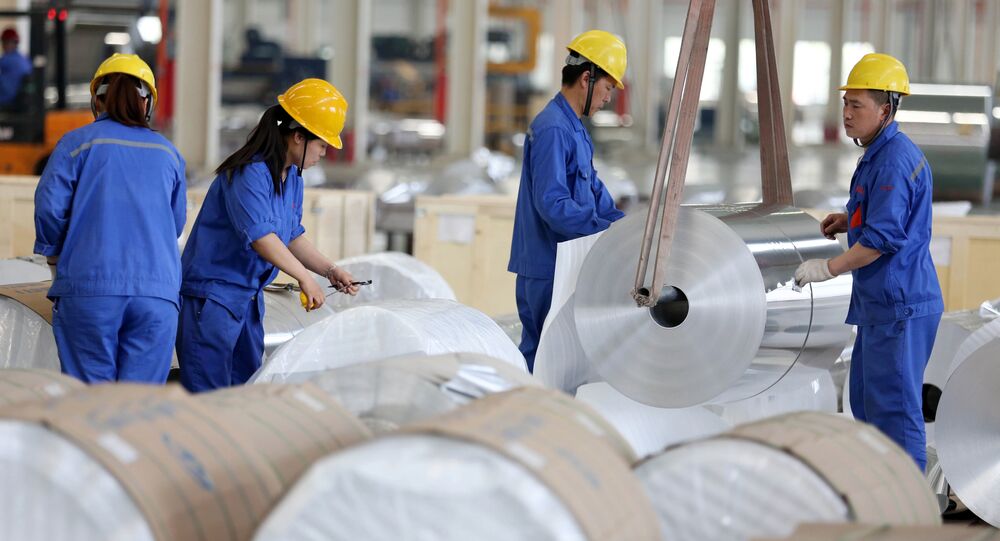 The US decision to increase antidumping duties on Chinese aluminum foil is an attempt to assure voters that Trump hasn't forgotten his promises to be tough on Chinese imports; however, imposing higher tariffs on Chinese goods is a "double-edged sword," Alexander Larin of the Russian Academy of Sciences' Institute of the Far East told Sputnik.

The US decision to increase antidumping duties on Chinese aluminum foil has angered China ahead of President Trump's visit to Beijing on November 8.

On October 27, the US Department of Commerce announced it would impose preliminary import duties ranging from 96.81 percent to 162.24 percent on the product, citing concerns that Chinese state subsidies for the domestic industry mean that aluminum foil is being sold at unfairly low prices.

China, which faces opposition from the US in its quest to be recognized as market economy in the WTO, accused the US of failing to adhere to WTO rules and using "discriminatory" methods to price imported goods when calculating whether dumping has occurred.

The ruling on Chinese aluminum foil imports is a preliminary one, and the Department of Commerce is slated to issue its final determination on February 23.

© AFP 2020 / STR
This picture taken on March 7, 2014 shows a man working beside a cargo ship in Qingdao port in Qingdao, east China's Shandong province
The announcement had initially been scheduled for early October but was postponed. The timing of the decision, just before Trump's 13-day visit to Asia, is no coincidence, Alexander Larin of the Russian Academy of Sciences' Institute of the Far East told Sputnik.

"On the eve of his visit to China, it seems Donald Trump needs to show his voters that he hasn't renounced the promises he made to be tough on China," Larin explained.

"The outcome of Trump's dialogue with the Chinese leadership is very important for everybody, the extent to which he is able to put forward his ideas about the inequalities of relations with China. Up to now, experience and practice have shown that little comes of Trump's promises. China, in turn, has strong leverage over the American economy, that's why all of Trump's [proposed] measures are a double-edged sword. At least, the Chinese can make them that way because they have something to answer with. I don't think that Trump will be able to undertake any radical measures which infringe the economic interests of China."

During pre-election campaigning, Trump urged protectionist measures to tackle the US trade deficit with China, which was $347 billion in 2016. Trump vowed not "to allow China to rape our country," and accused Chinese industry, along with Mexico and Japan, of "killing us" by taking advantage of "grossly incompetent" US leaders.

In September, Commerce Secretary Wilbur Ross ordered a probe into the suspected dumping of stainless steel flanges imported from China and India. In June, the department started investigating aluminum imports from China and other foreign nations under Section 232 of the 1962 Trade Expansion Act, a seldom-used law that allows for tariffs on imports which pose a national security risk. The US President has also initiated a review into "forced transfer of American technology and the theft of American intellectual property" by China.

© AP Photo / Jacquelyn Martin
From left, Treasury Secretary Steve Mnuchin, Chinese Vice Premier Wang Yang, and Commerce Secretary Wilbur Ross pose for a group photograph before speaking at the opening of the U.S.-China Comprehensive Economic Dialogue, Wednesday, July 19, 2017, at the Treasury Department in Washington.
In addition, in August 2017 the government had already imposed duties on Chinese aluminum foil ranging from 16.56 percent to 80.97 percent. In 2016, US imports of aluminum foil from China were valued at an estimated $389 million.

Andrei Maslov, director of the Russian Higher School of Economics' School of Oriental Studies, told Sputnik that the "aluminum wars" are no more than an attempt to suppress Chinese competition in the sector.

"China is seriously active in the metals and metal product markets. For the last three or four years, they have been actively developing the metallurgical industry, including the production of aluminum foil. In fact, China has become the world's largest supplier of this product, including in the US, and US dependence on China in this respect increases with every year."

"Moreover, now China, of course, dictates the price of aluminum foil. At one time, the US itself produced and supplied aluminum foil to China and also established production in some Southeast Asian countries. However, today they have almost completely lost control of this product. Today, the US is the world's largest consumer of aluminum foil and they are trying in every possible way to limit the growth of China's influence on this product. Of course, the US is also trying to strengthen its negotiating position ahead of the summit in Beijing," Maslov said.

"The US Department of Commerce launched its anti-dumping and anti-subsidy investigation into the import of Chinese aluminum foil back in March," Bian pointed out.

"In addition, Trump recently sent a lot of friendly signals to China, especially after the 19th Congress of the Chinese Communist Party, when he congratulated the General Secretary of the CPC Central Committee, Xi Jinping. In my opinion, Trump sincerely believes in good relations with China and also hopes that his visit to China will create an even more favorable atmosphere."

However, the Chinese expert said that the domestic political situation in the US might be a trigger for the Commerce Department's move.

"I don't exclude that the restrictive measure is connected with the internal situation in the United States. Figuratively speaking, Trump looks like a man with a 'burned head and a broken forehead,' that is, the level of his support is by no means high. In addition, some of his extravagant actions and judgments are ridiculed in the media and by his political opponents. All this is an indication of the disintegration of the political and economic situation within the US and also affects the credibility of the country's leadership, which, in turn, reduces the global potential of the United States," Bian said.