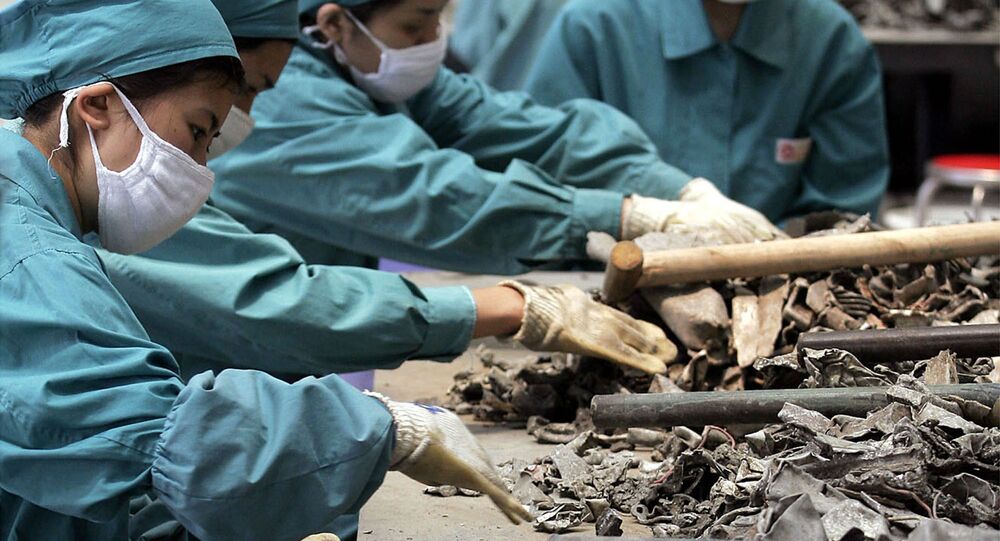 The US has slapped anti-dumping tariffs on Chinese aluminum products ahead pf President Trump’s visit to Beijing early next month, signaling the US administration’s serious plans to refurbish bilateral trade by making it more fair, transparent, and market-driven.

Kristian Rouz – The Commerce Department said Friday that it found China had been selling aluminum foil in the US market at unfairly low prices. The revealed dumping practices have hurt domestic manufacturers, as well as other exporters of aluminum to the US, thus challenging the World Trade Organization’s (WTO) rules.

© REUTERS / Jason Lee
Is Foreign Aid Flow a Political 'Competitive Tool' for US and China?
The Commerce Department also said it had imposed preliminary customs tariffs on the Chinese aluminum foil. These new duties ranged from 98.61 percent of the cost of the foil to 162.24 percent. Previously, in August, the Commerce Department had implemented a similar measure – tariffs ranging from 16.56 percent to 80.97 percent – in a bid to warn China and contain its dumping practices, but that didn’t help.

This comes ahead of President Trump’s visit to mainland China, where he will push Beijing on its unfair trade practices, and seek a joint platform on the North Korean issue, as well as other issues.

The move suggests that President Trump is adamant to eliminate the deep US trade deficit, and seeks to negotiate trade with China by demonstrating the possible negative effects on Chinese industries in the event of non-cooperation.

The Commerce Department said its final review on trade with China will conclude by February, at which point it plans to implement similar additional measures. This will largely depend on China’s willingness to review its approach to trade with the US.

© AP Photo / Pang Xinglei/Xinhua
Strategic Rebalancing Act: What's Behind China's Drive to Build World's Most Powerful Military
Still, the department has already instructed the US Customs and Border Protection to start collecting cash deposits from importers based off the new tariffs.

The duties imposed in August were countervailing, meaning they are aimed at counteracting and balancing unfair or one-sided subsidies of goods America's trade partners export to the US. The new duties reflect anti-dumping laws; this is more serious, as these target products sold in the domestic (US) market at a below-market price.

The latter concerns China’s alleged copying of foreign technology – including American tech –so that it may make domestic products at lower prices and sell them in the international market.

Aluminum is becoming an increasingly profitable industry, with the aluminum price expected to rise to $2,000/metric ton compared to the previous forecast of a $1,900/metric ton, according to BMI Research. There is a deficit of aluminum forming in the global market, which is pushing the prices up and benefitting countries such as Brazil and Australia, as well as China – which is willing to trade aluminum and aluminum products below their market price.