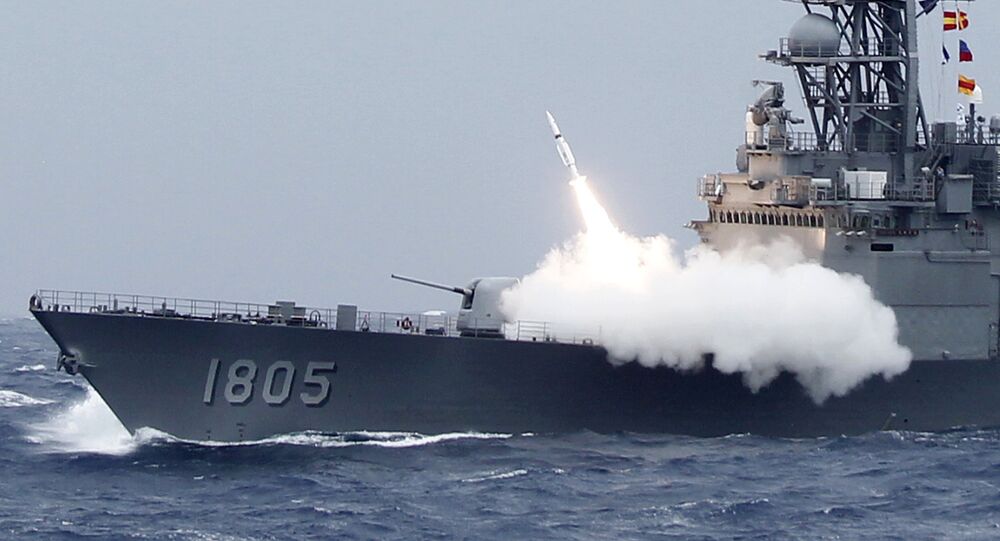 If the Trump administration wants to further develop the US-Chinese relationship, it should hear out Beijing's concerns over the US increasing its military ties with Taipei under the Taiwan Relations Act of 1979, Jiang Yuechun, director of the Chinese Institute of International Studies' Center for World Economy and Development told Sputnik.

While maintaining relations with Taiwan, Washington must take concerns of the Chinese mainland into account and keep in mind the current state of affairs and prospects for building a new type of major-country relationship, Jiang Yuechun, director of the Chinese Institute of International Studies' Center for World Economy and Development told Sputnik.

"Despite the US' promise to China, [Washington] has never curtailed its contacts with Taiwan, especially in the field of arms trade," Jiang told Sputnik China.

He voiced concerns over the increased military cooperation between the US and Taiwan, which includes the US supplying Taipei with both light and heavy weapons. "Naturally, China opposes the US-Taiwanese collaboration," the scholar underscored.

The South China Morning Post reported Wednesday that Taiwanese and US military officials are due to meet in November "to discuss Taiwan's shopping list of arms," adding that the move is likely to prompt criticism from Beijing.

© AP Photo / Wally Santana
Waking the Dragon: US Arms Sales to Taiwan 'Bound to Spark a Backlash From China'
In June, the Trump administration approved the sale of $1.42 billion in arms to Taiwan. The deal includes deliveries of anti-radiation missiles, heavyweight torpedoes, as well as components for SM-2 missiles and air-to-ground missiles.

However, it is possible that the US Congress will push ahead with the plan to boost arms supplies to Taipei which exceed the volumes approved under the previous administration. Potentially, the future deal may also include fifth generation F-35 stealth multifunctional fighter-bombers.

The military cooperation between the countries is being conducted in accordance with the Taiwan Relations Act of 1979, which remains the apple of discord between the US and China.

© AFP 2021 / SAM YEH
Why US-Taiwan Military Cooperation May Result in Cold War With Beijing
Following the US' recognition of the People's Republic of China (PRC) in January 1979 by then-President Jimmy Carter, the act outlined the substantial but non-diplomatic relationship between Washington and Taipei. It also obliged the US to continue arms sales to the Taiwanese government to provide the latter with sufficient self-defense capabilities.

Before the disruption of official diplomatic ties between the US and Taiwan, the two had been participants of the Sino-American Mutual Defense Treaty between 1955 and 1979.

"The US policy towards Taiwan has remained unchanged," the Chinese scholar emphasized. "There is a contradiction between US-Taiwan cooperation within the framework of the Taiwan Relations Act and the relationship between China and the United States."

However, the US officially continues to adhere to the One China policy, which stipulates that there is only one sovereign state named China, he admitted. The policy means that countries seeking to establish diplomatic relations with Beijing must bring their official relations with Taipei to a halt and vice versa.

© AP Photo / Fan Yishu/Xinhua
While 'US Tries to Curb China' in Asia-Pacific, Beijing Boosts Its Army
The issue originates with the fact that Taiwan's other name is the Republic of China (ROC). The ROC lost control of mainland China in 1949 as a result of its defeat in the Chinese Civil War between the Kuomintang (KMT)-led government and the Communist Party of China (CPC).

The Trump administration's alleged plans to bolster weapon supplies to Taiwan has already sparked sharp criticism from Beijing, which views it as an "incorrect signal" to the separatist forces on the island. The Chinese leadership has repeatedly reminded the US that the Taiwan issue remains an internal affair of China, related to the territorial integrity and sovereignty of the PRC.

Observers assume that Washington's move to arm Taiwan depends on the upcoming visit of the US president to China on November 8-10. Although the US State Department has confirmed its commitment to the One China policy, it is expected that Donald Trump would continue to use the Taiwan issue to exert pressure on Beijing. If Trump increases US arms deliveries to Taipei, the Chinese leadership may regard it as an attempt to undermine Sino-American relations.

Speaking to Sputnik in June, Andrei Karneev, deputy head of the Institute of Asia and Africa at Moscow State University predicted that the move will definitely spark a backlash from China, which objects the altering of the balance of power in the Taiwan Strait, or Formosa Strait.