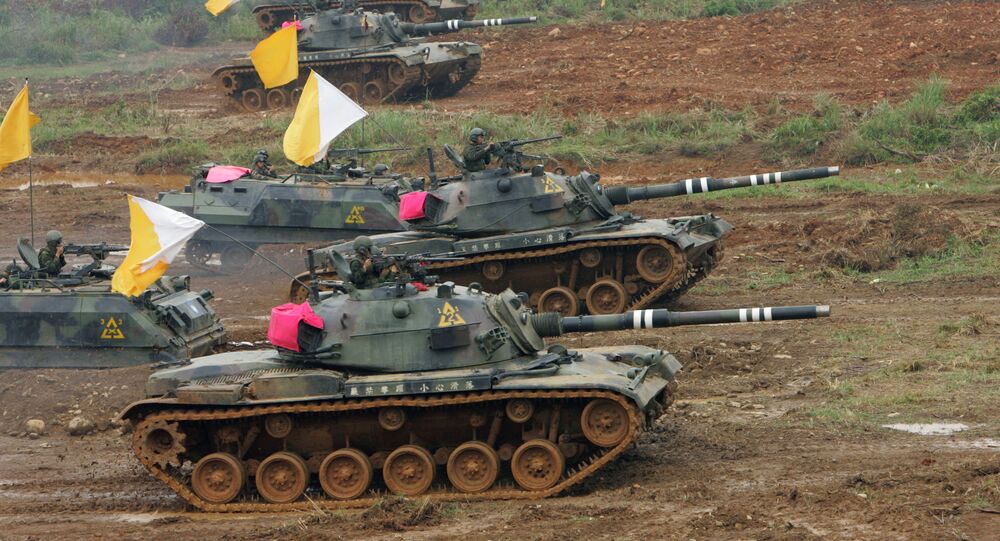 US lawmakers have recently called on the Trump administration to speed up arms sales to Taiwan as tensions between the self-governing island and mainland China continue to escalate. While the move has been welcomed by the Taiwanese authorities, Russian political analyst Andrei Karneev told Sputnik it will definitely spark a backlash from China.

© AP Photo / Chiang Ying-ying
Antsy Taiwan Waiting on Long-Rumored US Arms Sale Amid Tensions with Beijing
On Thursday, the lawmakers in the United States called for the Trump administration to speed up the arms sales to Taiwan. The calls came after the Central American nation Panama announced that it was switching ties from Taipei, the capital of Taiwan, to Beijing and amid the escalated tensions between Taiwan and the mainland China.

"I remain concerned about successive administrations’ delays in arms sales notification for Taiwan, which have needlessly dragged out the arms sales process," Ed Royce, the chairman of the US House Foreign Affairs Committee, told the hearing in Washington on Thursday.

Royce said he hoped to see regular notifications in the future and looked forward to the announcement of new sales this year.

The Taiwanese Foreign Ministry and the Mainland Affairs Council have both expressed gratitude to American leaders who have been pushing for the arms deal.

US officials told Reuters in March that President Donald Trump was orchestrating a major arms sale to Taiwan, including advanced rocket systems and anti-ship missiles. It may exceed the $1.8 billion deal former President Barack Obama inked with Taiwanese leadership in December 2015.

© REUTERS / Mark Kauzlarich
Trump May Use Taiwan, Currency and Trade Cards as Bargaining Chips in US-China Relations
In total, the Obama administration sold $14 billion worth of weapons to the Taiwanese, compared to about $30 billion under the preceding Bush administration and about $18 billion under Bill Clinton.

But the White House itself has been tight-lipped about such a deal, with leaders offering assurances and supportive remarks but little in the way of concrete details. Both Secretary of State Rex Tillerson and Secretary of Defense James Mattis have expressed the American commitment to a defense relationship with Taiwan in recent weeks, but offered not much besides that.

Andrei Karneev, deputy head of the Institute of Asia and Africa at Moscow State University told Sputnik that the move will definitely spark a backlash from China, which objects the altering of balance of power in the Taiwan Strait, or Formosa Strait.

Even though during his talks with Chinese leader Xi Jinping President Trump voiced his support of the "One China" policy, the political analyst doubted that he will cancel or substantially decrease the military aid program to Taiwan.

The terms, volumes and the actual arms deliveries will be subject to discussions. Karneev also doubted that there will be any speedy decisions on the issue in the wake of Trump's ongoing negotiation with Beijing on the North Korean nuclear program. However even if this cooperation proves a success, Washington won't give up its "Taiwanese lever" on China.

The US Congress, in turn, won't leave its attempts to force the White House to increase the arms sales to Taiwan in comparison to those approved by the Obama administration, he said.

Dan Blumenthal, a former senior director for China, Taiwan, and Mongolia at the US Department of Defense urged the Trump administration to include Taiwan in its Asia Pacific strategy, particularly on the South China Sea issue.

© AFP 2020 / Philippe Lopez
Furious China Reiterates Warning to US Over Taiwan President Visit
It might also include the deliveries of the advances fifth generation F-35 multirole fighters.  Blumenthal said a key issue is whether Taiwan can afford the aircraft's exorbitant costs, adding that many other options are available for US-Taiwan security cooperation.

Karneev however noted that Beijing keeps reminding the US that its relationship with Taiwan remains an issue of sovereignty and territorial integrity of China and remains China's internal business.

It still remains to be seen, when the new package of the US arms sales to Taiwan will be approved, he said, however it is only too clear that China will regard it as an attempt to undermine China-US ties as well a peace and stability in the Taiwan Strait.