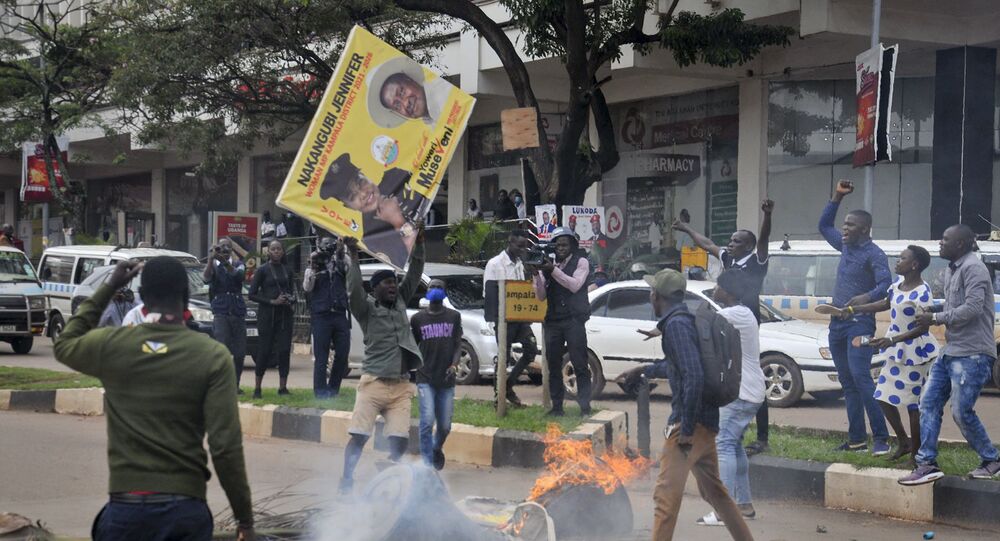 Yoweri Museveni came to power in Uganda in 1986 after his rebel army, the National Resistance Movement, finally took the capital after a six-year bush war. He brought stability and relative prosperity after years of violence and strife under Idi Amin and Milton Obote but he is now 76.

Ugandans go to the polls on Thursday, 14 January, with both the European Union and the United States having severe doubts about the electoral process.

President Museveni is seeking to hold onto power after 35 years in office and is facing a strong challenge from Bobi Wine, 38, a singer who grew up in one of Kampala’s biggest slums.

​The EU said this week Uganda’s elections had been “seriously tarnished” by the excessive use of force by the government and the US cancelled plans to send a team of election observers.

Museveni, wearing military uniform in a televised address on Tuesday 12 January, accused foreigners of interfering in Uganda and added: "We…don't need lectures about anything from anybody. Because there's nothing we don't know.”

Bobi Wine told The Observer this week: “My warning to Museveni is to learn from history. It’s important that you respect the voices of the people of Uganda because, if you do not, you will also end up in the dustbin of history like your friends Gaddafi, Mugabe and Bashir.”

So how many of Africa’s other leaders are getting long in the tooth and how many have recently fell from power?

Teodoro Obiang Nguema, 78, has been the leader of the former Spanish colony of Equatorial Guinea - which is in - since 1979.

His longevity is largely due to his country’s oil and gas wealth which has enabled him to reward his supporters and pay off his opponents.

In 2004 a group of mercenaries led by a retired British soldier, Simon Mann, planned to overthrow Obiang.

The plotters were detained in Zimbabwe en route to the Equatorial Guinean capital, Bata, and Mann was later jailed for seven years.

Sir Mark Thatcher - son of former prime minister Margaret - was among those implicated in the coup attempt.

Obiang rules with a rod of iron and opponents are killed or locked up in the notorious Black Beach prison.

His son Teodoro Nguema Obiang Mangue, who was appointed First Vice President in 2016 is being groomed to take over.

Next door to Equatorial Guinea, Paul Biya, 87, has been the head of state in Cameroon since 1982.

Three-quarters of the country’s population have never known another leader and his mandate - after being re-elected in 2018 - is not due to expire until 2025, when he will be 92.

​France is the country’s former colonial power and Biya has been a loyal ally of Paris for decades.

But his love of all things French, including the language, have got him into trouble in recent years.

In the far north-west of the country, along the border with Nigeria, is a strip of territory which was once a British colony and where the people are Anglophone, rather than Francophone.

In 2017 a rebellion broke out by Anglophones wanting to create their own country - Ambazonia - but government troops have brutally crushed it.

When the Dergue - which controlled Ethiopia since the fall of Emperor Haile Selassie in the 1970s - were brought down in 1991, Eritrea broke away and became independent.

Isaias Afwerki, who had led the Eritrean People’s Liberation Front, was referred to by US President Bill Clinton as a "renaissance African leader".

​Afwerki, who is now 74, became the new head of state and has not bothered with holding elections in Eritrea.

He recently became embroiled in Ethiopia’s conflict with the leaders of the Tigrayan People’s Liberation Front.

Eritrean troops reportedly crossed into Ethiopia’s Tigray region in support of Addis Ababa and have even been accused of kidnapping Tigrayan women.

Eritrea is one of the most impoverished and repressive countries in Africa and every year tens of thousands of Eritreans migrate, or try to migrate, to Europe for a better life.

Morocco is one of only three kingdoms in Africa - the others being Lesotho and Eswatini - and King Mohammed VI has been in power since 1999.

In 1975, after Spain withdrew from the Western Sahara, his father King Hassan II encouraged the so-called Green March by which Moroccans marched into the territory and annexed it.

​Last month President Trump gave US approval for Morocco’s sovereignty of the Western Sahara, something which has not been accepted by Britain or many other western countries.

Mohammed VI’s powers are more than a constitutional monarch but slightly less than an absolute monarch.

In 2010 a new constitution was introduced which gave greater powers to parliament and the prime minister but the king remains the head of state and has wide-ranging powers.

Mohammed VI is 57 but has suffered heart problems in recent years. His heir is his 17-year-old son, Hassan.

A former army officer, he swept to the power at the head of a Libya-backed rebel movement, the Patriotic Salvation Movement which ousted President Hissène Habré - who was convicted of war crimes in 2016.

Déby has survived several rebellions against his rule but has been propped up by France, which considers him a key ally.

Chad, a Muslim-majority country in central Africa, cut diplomatic relations with Israel in 1972 but restored them in 2019.

Robert Mugabe became leader of Zimbabwe in 1980 after the British government brokered an agreement to end a war in the former colony, originally known as Rhodesia.

His main rival was Joshua Nkomo, who had led the rival ZIPRA group which drew its support from the minority Ndebele tribe.

Mugabe turned Zimbabwe into a one-party state under ZANU-PF and, during the Gukurahundi massacres, repressed the Ndebele and supporters of Nkomo, who died in 1999.

Mugabe held on to power for decades, embezzling millions of dollars which was spent on luxury homes and expensive shopping by his second wife Grace.

In November 2017 Mugabe was finally deposed by his former friend and ally Emmerson Mnangagwa.

Mnangagwa was elected President in 2018 as the ZANU-PF candidate, defeating Nelson Chamisa of the opposition MDC.

Omar al-Bashir was President of Sudan from 1989 until April 2019, when he was finally deposed in an army coup after days of demonstrations.

Bashir, who is now 77, came to power in a coup d’etat when he ousted the elected prime minister Sadiq el-Mahdi, a Sufi cleric who died last year.

During his reign Khartoum fought a long and ultimately failed war against Christian and animist rebels, who eventually founded the nation of South Sudan.

Bashir is also accused of encouraging human atrocities in Darfur by his janjaweed militias between 2003 and 2006.

In 1962 Algeria was finally granted independence from France and the victorious FLN movement became the ruling party.

The FLN, which is nominally socialist, has remained the dominant party in Algeria ever since and in the 1990s crushed a violent Islamist insurrection.

© AFP 2020 / PATRICK BAZ
A supporter of Algerian President Abdelaziz Bouteflika kisses his picture as he celebrates in Algiers on April 18, 2014 after Bouteflika won a fourth term with 81,53% of the votes.

Abdelaziz Bouteflika became President in 1999 and was re-elected three times.

But in 2019 there were protests in Algiers and other cities by young people after it emerged Bouteflika, who 82 and in poor health, was planning to run again in that year’s elections.

Eventually Bouteflika conceded to the inevitable and stepped down.

In December 2019 the FLN candidate - Abdelmadjid Tebboune - won the presidential election, which was boycotted by many of the protesters.