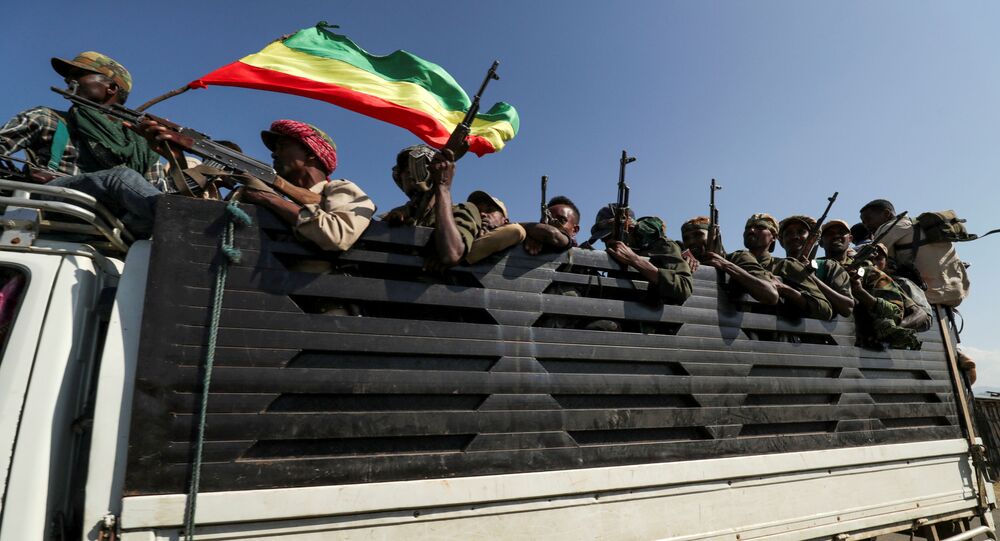 Fierce fighting has been underway for several weeks since Ethiopia’s Prime Minister Abiy Ahmed unleashed military forces in an effort to subdue a rebellious regional administration in Tigray, with hundreds of people reported to have been killed.

Eritrea's capital Asmara has come under fire from Ethiopia's northern Tigray region, with at least one rocket launched, reported AFP, citing four regional diplomats. There was no immediate confirmation of how many rockets were fired, where they landed, and whether any casualties or damage were caused.

This is the second such attack since Ethiopia’s internal conflict erupted earlier this month.

© REUTERS / TIKSA NEGERI
FILE PHOTO: Members of Amhara region militias ride on their truck as they head to the mission to face the Tigray People's Liberation Front (TPLF), in Sanja, Amhara region near a border with Tigray, Ethiopia November 9, 2020.

The Tigray People's Liberation Front (TPLF), a powerful regional administration that the national government has been at loggerheads with since 2018, has accused Ethiopia of enlisting Eritrean military support in the current fighting, despite Ethiopia denying the charges.

The group claimed responsibility for similar strikes on Eritrea two weeks ago. There has not yet been any official comment from the TPLF leaders.

The current developments come as hundreds of people have been reported dead in the fighting, with some 40,000 refugees fleeing into neighbouring Sudan, according to the United Nations.

As the UN warns of fuel and food shortages in Tigray, with Mekele, the regional capital, reportedly encircled by the national army ahead of an imminent attack, fears are mounting that the violence might spread further, writes The New York Times.

Meanwhile, the leader of the Tigray forces has said that the regional capital Mekele is under heavy aerial bombardment that started Saturday, with Eritrea’s troops raiding refugee camps in Ethiopia to take back Eritreans who fled their country, reported Reuters, citing a text message. It was added that the Ethiopian military was using artillery in the assault on Mekelle.

Prime Minister Abiy Ahmed Ali of Ethiopia, who ramped up military action three weeks ago against the country’s northern region of Tigray and its rebellious governing party, on Thursday ordered a “final” military assault on Mekele. He urged the city’s residents to “disarm,” “stay home” and assist in arresting the region’s rebellious leaders.

As he announced that the deadline had passed for the Tigray People’s Liberation Front to surrender, the Prime Minister went on Twitter to say that the “last peaceful gate” had been closed.

Final Phase of the Rule of Law Operations Commences pic.twitter.com/TAAyZxSe0U

​The prime minister, who on Friday met with three former African leaders - Joaquim Chissano of Mozambique, Ellen Johnson Sirleaf of Liberia and Kgalema Motlanthe of South Africa - dispatched by the African Union as mediators, dismissed all calls for dialogue with the TPLF as "interference" in Ethiopia's internal affairs.

The Tigrayan government said Friday the federal army was bombarding towns and villages and inflicting heavy damage, adding in a statement on regional television:

“Our struggle will continue from every direction until the self-determination of the People of Tigray is guaranteed and the invading force is driven out.”

Months of friction between the national government and the TPLF, which wielded power over Ethiopian politics for nearly three decades before Abiy took office in 2018, erupted into violence after the Prime Minister announced military operations in Tigray on 4 November.

Abiy accused the Tigray region’s leaders of assaulting a government defence post and trying to steal artillery and military equipment.

​On 10 November the Prime Minister said law enforcement operations in Tigray would end only when the "criminal junta" is disarmed.